Millions to the Polls: Early Voting

In a representative democracy like ours, the more people that vote, the stronger our democracy becomes. Given this truth, our voting procedures should provide the flexibility to accommodate every eligible person who wants to cast a ballot. Yet many states still limit the one opportunity for casting a ballot to a single Tuesday in the middle of the work week.

Restricting voting opportunities to a single day no longer serves the needs of a modern democracy. Most people must now take time out of their workday to vote and while some laws exist that provide employees with paid time off in order to vote,1 many of those laws limit the time allowed to just two hours. For those who cannot afford to take hours out of their workday, the other options to vote are to go before or after work. It’s not hard to see how childcare, family obligations, or non-traditional work schedules further decrease the voting window on Election Day.

Early voting has several benefits. Voting before Election Day decreases wait times and shortens lines on Election Day because voting is spread out across a larger number of days.3 As there are fewer voters at one time and less crowded polling centers, the burden on poll workers is reduced on Election Day.4 Election officials are also supportive of the policy and after the 2012 election many called for improved access to early voting.5

Early voting can also potentially narrow the race and class voter turnout gap. If Election Day is the only day in which voters can vote, they must balance work obligations, childcare, and other responsibilities that can deter them from voting, not because of apathy but simply because of logistics. Working and lower income people, in particular, have less flexible schedules. Early voting has the potential to help ease these competing burdens by providing people with more choices about when they can vote.

Academics continue to study the impact of early voting on turnout but usage of early voting has recently surged among traditionally underrepresented voters. The 2008 election marked a dramatic increase in early voting among African American and Latino voters.6 And in Florida, where approximately 50 percent of ballots were cast early in 2012,7 African-American usage of early in-person voting has exceeded White usage in four of the five most recent federal elections.8 Research suggests that turnout increases are maximized when early voting is combined with Same Day Registration.9 Moreover, early voting is popular with voters. In nine states, more than 30 percent of voters used early voting. In 2012, nearly a third of voters cast their ballot before Election Day, more than double to rate of the 2000 election.10

There are two basic forms of early voting. Early In-Person Voting allows voters to cast a ballot by appearing in person at a local elections office or other designated location during a set time period prior to Election Day. Absentee Voting allows voters to submit their ballots by mail or by dropping them off at designated locations. With absentee voting, voters simply apply for and receive an absentee ballot in the days or weeks before Election Day. Of the more than 47 million Americans who voted early in 2012, 29 million ballots were cast by mail, and 18.5 million through early in-person voting.11

Some states restrict absentee early voting only to those who can demonstrate an “excuse” or “cause,” which tend to be narrow categories, such as being entirely absent from the city or county on Election Day.12 However, this restriction does not take into account the work schedules and family responsibilities of many citizens. Ideally, absentee ballots should be available to any eligible voter without requiring a narrowly defined reason or “excuse” to obtain and vote an absentee ballot. Even better, seven states—Arizona, California, Colorado, Hawaii, Montana, New Jersey and Utah plus the District of Columbia offer permanent absentee voting for all eligible voters.13 This designation allows voters to join a permanent absentee voter list and then continue to receive a ballot by mail in subsequent elections without having to continually reapply. 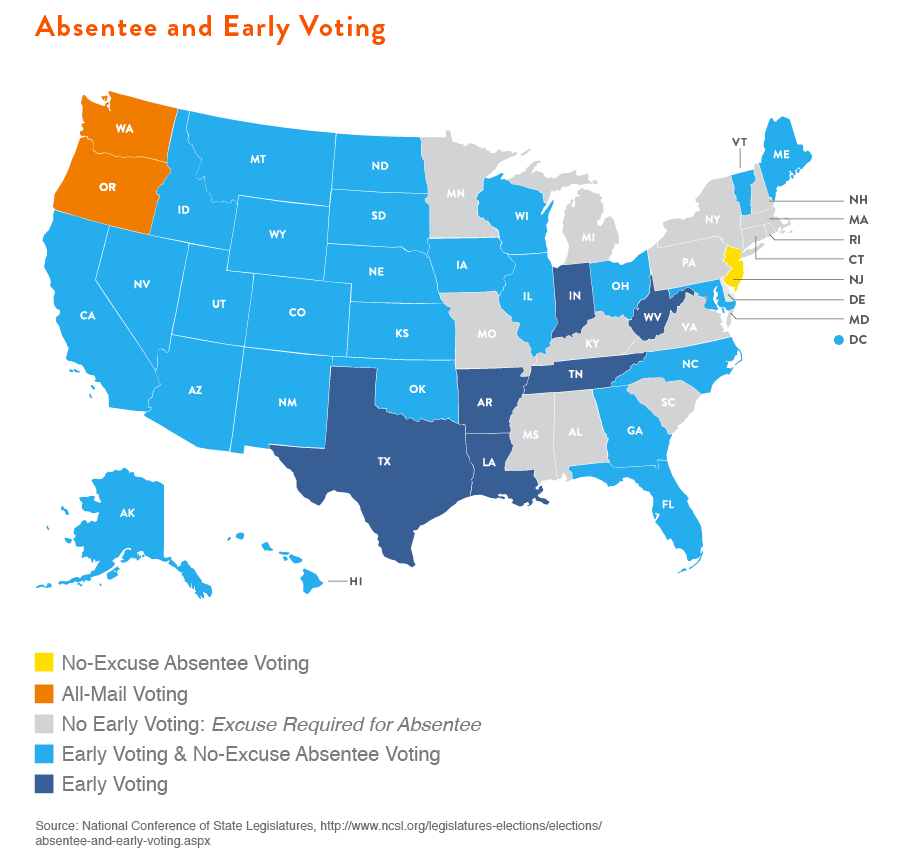 Going beyond allowing no-excuse absentee voting or permanent absentee voting, two states, Oregon15 and Washington,16 conduct their entire elections by mail. Oregon began the first limited use of vote by mail in 1981 and in 1998, Oregon voters amended state law to require that primary and general elections be conducted through vote by mail.17 In 2007, the state legislature approved all elections to be conducted by mail.18 A ballot package, which contains a ballot, a secrecy envelope and a return envelope, is mailed between two and three weeks before the election to every registered voter.19 The ballot can then be returned by mail, dropped off at a designated drop site, or returned to any county election office.20 A change of address, name or political party can be done through a new voter registration card or a visit to the county elections office up until Election Day.21

In 1993, the Washington State legislature extended mail voting to all citizens and a 2005 law allowed counties to choose whether or not to conduct elections exclusively by mail or offer both mail-in ballots and in-person polling places.22 In 2011, the state moved to an entirely vote by mail system.23 Ballots are mailed to registered voters at least 18 days before Election Day.24 Similar to Oregon, Washington State mails out a ballot packet that includes the ballot, a secrecy envelope and a return envelope.25 Ballots must be postmarked by Election Day, dropped at a designated ballot drop box by 8pm on Election Day, or returned in person to the county elections department by 8 pm on Election Day.26 Sixty percent of ballots are not returned by mail, but rather at drop boxes or in person.27 Voters can change their voter registration information online, by mail or at county election offices.28

Voter turnout rates in Oregon and Washington are consistently higher than both the national average and also states with more restrictive mail-in ballot policies.29 Vote by mail offers more flexibility and ease of voting, particularly for voters who do not have flexible work schedules. Voters also have more time to study issues and candidates before casting their votes. Vote by mail also streamlines the electoral process and electoral administrators only need to focus on mail-in ballots, rather than mail-in ballots and polling places.

Hawaii held an all-mail special election for Congress in 2010.30 The voter turnout was 54 percent, markedly higher than the 13.3 percent turnout for the 2003 special election.31 The mail-in election also saved roughly $300,000, simplified logistics, and decreased the impact of last-minute negative campaigning.32 Colorado passed a bill to mail a ballot to every voter while still providing in-person voting.33

As states consider moving to all mail-in voting, policies and procedures must be put into place to ensure voter turnout doesn’t decrease, particularly among low-income and communities of color who already have lower turnout rates. For instance, voters should not be removed from voting rolls during the 9060 days before an election—and never without full compliance with the voter protections in the NVRA—which is the time period during which vote by mail applications are generally received and ballots begin to be mailed out. Ballot packages should be classified as forwardable mail. Voters should still be able to vote at voting centers and polling places on Election Day as the mail-in program is rolled out.