Millions to the Polls: Ballot Design

It seems almost too basic to have to state that the ballots used for voting must be simple and straightforward. Yet, past experience has shown that ballot confusion is common and can have disastrous consequences. In the 2000 Presidential election, poor ballot design caused confusion among Florida voters, resulting in some voters casting their ballot for a different candidate than they intended.1 The Florida ballot, shown below, required voters to punch a circle next to the candidate for whom they wanted to cast their vote. However, poor layout resulted in confusion over which circle went with which candidate. As a result, many voters cast their vote for the wrong candidate. 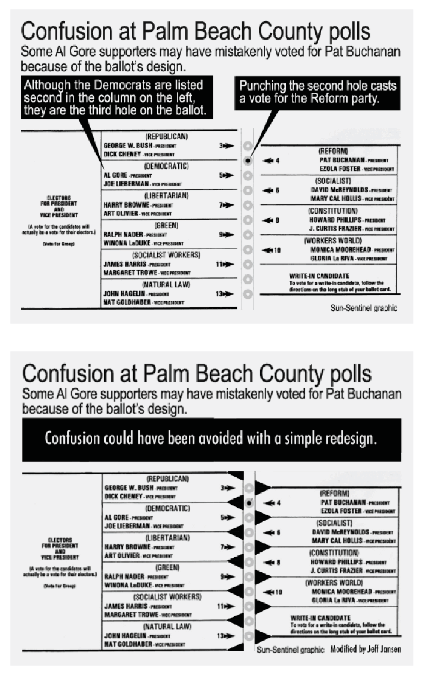 However, as shown on the following page, a simple fix would have made the ballot clearer.

Yet, even though the second ballot may be less confusing than the original, it is still confusing. Too many graphic symbols crowd the ballot and the two columns of candidates make it more likely that a voter picks a candidate different from her intention. Simply listing all the candidates straight down in one column would have made the ballot far clearer, as the sample ballot below shows.2

Poor ballot design can also result in “overvotes,” where voting machines detect more than one candidate selected for a contest.3 In these cases, no vote is recorded for the contest, regardless of the voter’s actual intent.4 Poor ballot design also disproportionately affects voters who are poor, elderly, disabled, and new to voting.5 Research shows that for 90 percent of the adult population to be able to read and understand the content, the ballot should be written at a 3rd grade reading level.6 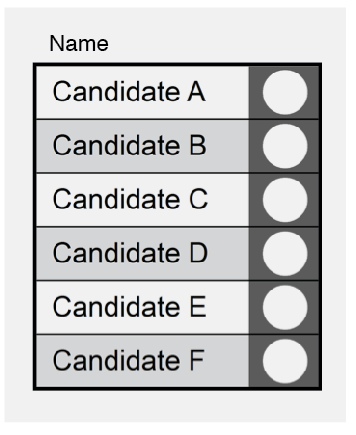 There are few set standards for ballot design in state law, but Minnesota and Washington have worked to ensure their ballots are accessible and easy to understand for their voters. Minnesota worked with design professionals and usability experts to redesign the instructions on the absentee voter submission envelope after more than 4,000 absentee ballots were not counted in 2008, mainly because voters failed to sign their ballot.7

Minnesota’s efforts were successful and as a result of the redesign, the number of unsigned absentee ballots decreased by 79 percent in 2010. Washington State passed a bill in 2010 that requires ballots to have a clear delineation between the instructions and the area to vote.8 The Secretary of State must also establish standards for ballot design and layout. These steps help ensure that the voter experience with ballots are in the forefront of priorities when designing ballots.

The good news is that creating ballots that are easy to understand is relatively simple. Ballot designers can think of the ABCs for ballot design: Accuracy, Brevity and Clarity: