In Rochester, a new mother, unable to get by on disability pay, is forced back to work just days after her baby is born. On Long Island, a young man can’t afford to miss a paycheck to help his wife recover from an accident. In the Bronx, a woman gives up her job, risking poverty to see her father through his last illness. Most countries and a growing number of U.S. states guarantee paid family leave to support working people and their families through the most significant moments of their lives, yet New York State lags behind.

While the federal Family and Medical Leave Act has helped millions of Americans take unpaid leave and return to work, many working people do not qualify for leave under the Act or cannot afford to take time off work without pay.1 Yet this brief shows that relying on private employers to fill the need for paid family leave is not enough. We offer a new analysis of data from the Bureau of Labor Statistics’ National Compensation Survey, finding that 6.4 million New York workers do not receive paid family leave from their employers.2 As a result, the vast majority of the state’s workforce—87 percent of non-farm, private sector workers in New York—lack a critical family support. This brief looks at the sectors where workers are most and least likely to have access to paid family leave and explains how a public family leave insurance system would provide a vital benefit to all working New Yorkers and their employers.

More than 1 in every 6 New Yorkers works in health care and social assistance—the state’s largest job sector. Employees in this sector staff the state’s hospitals and nursing homes, provide assistance to the elderly, do social work, and take care of children.  Although their jobs support the most fundamental health and family needs of others, 84 percent of employees in health care and social assistance don’t have access to paid family leave through their jobs. Yet paid leave is even more scarce among the state’s other leading employment sectors: in retail, which employs almost a million workers statewide, 94 percent of employees lack paid family leave. 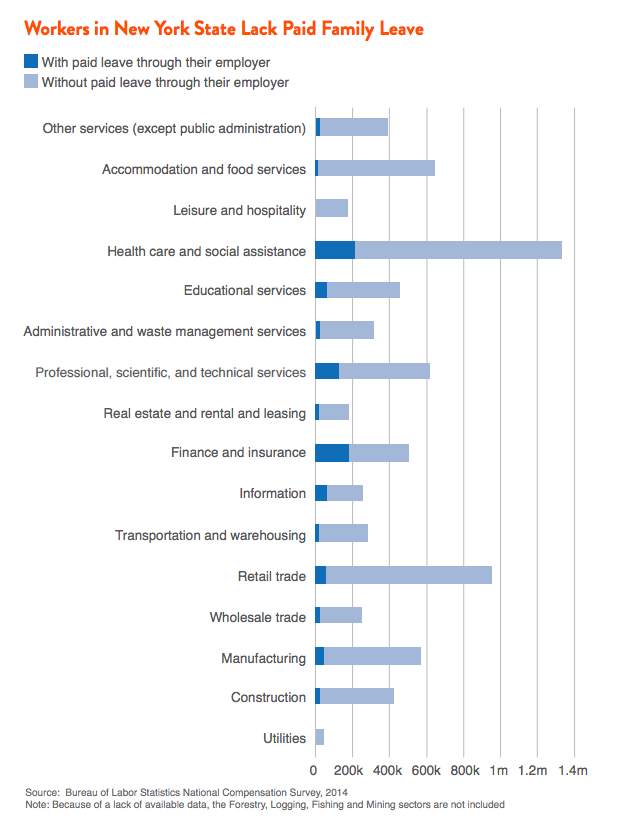 In the New York’s third leading sector, accommodation and food service, the figure is 97 percent. The almost total absence of paid family leave in retail and food service jobs compounds the difficulty of sustaining a family with work in these industries, where many jobs are also plagued by low wages and unstable schedules.3

In recent months, tech companies such as Facebook and Google and financial firms including the Blackstone Group, Goldman Sachs, and Credit Suisse have made headlines by expanding the paid leave benefits they offer new parents. Indeed, employers in the finance and insurance sector and in the information sector are the most likely to offer paid family leave to their workforce. Yet even in finance and insurance, 64 percent of New York employees still do not receive paid leave from their employer. In information, a sector that includes publishing and broadcasting as well as telecommunications and data processing, 74 percent of employees don’t have access to paid leave. While some of New York’s most dynamic and deep-pocketed companies have recognized the business benefits of offering paid family leave to their employees, many companies cannot afford to finance the benefit themselves, and a majority of workers lack this critical source of support even in the industries where paid leave is most abundant.

Ensuring that the next generation gets a healthy, loving start in life—and that families don’t fall into poverty as they struggle to care for one another in times of sickness—are society-wide challenges, not problems that individual families and businesses can solve on their own. Surveys find that 80 percent of Americans, including 71 percent of Republicans, favor requiring all employers to offer paid leave to parents of new children and employees caring for sick family members.5 Polls of New Yorkers are similarly favorable, with 81 percent of New York City residents (including 80 percent of Republicans) supporting the establishment of a paid family leave insurance system even if it means a dollar a week would be deducted from their own paychecks to fund it.6

Benefits of Paid Leave in Other States

Similar systems established in California, New Jersey and Rhode Island have operated successfully for workers and have had little impact on how employers do business.7  On the worker side, research has found that when paid leave is available, mothers are less likely to drop out of the labor force when they have a baby and that their family incomes increase.8 Paid leave also improves child health outcomes—including reducing infant mortality rates—and is associated with better mental and physical health among new mothers. Fathers who take paid leave are more engaged in caring for their babies.9 While there is less research available on the effects of paid leave for workers who are caring for aging parents or other adult family members, caregivers’ need for paid leave is well documented: 1 in 6 American adults cares for an aging, ill, or disabled family member and the number is expected to grow as the population ages.10 Family caregivers regularly lose income, taking unpaid leave or exiting the workforce entirely to provide care.11 Paid family leave would address a significant unmet need for working caregivers.

On the business side, research finds that California’s paid family leave program has reduced absenteeism and improved retention among low-wage workers by ten percent.12 This represents no small savings given that turnover costs can amount to 25 to 200 percent of an employee’s annual compensation when recruiting, hiring, training, and other requirements are taken into account.13 Although business lobbyists were initially the most vehement opponents of California’s paid leave program, 5 years after its implementation 9 out of 10 employers reported no negative effect on business profitability or performance, with small businesses even less likely to detect any damaging impact on their bottom line.14 In New Jersey, the effects were similar, with a majority of employers reporting no increase in paperwork due to administration of the program and no employers finding any instances of employees abusing the program.15

Paid Leave for All New Yorkers

National legislation to establish paid family leave has been introduced in Congress, but New York can’t afford to wait for Washington to act.16 To address the need now, New York should expand and modernize its 67-year-old Temporary Disability Insurance system to include paid family leave that can be used to care for a new baby, or a newly adopted or fostered child; a seriously ill family member; or to assist a family member who is deploying for military duty. Legislation that has already passed the New York State Assembly for a number of years would provide up to 12 weeks of job-protected leave paying benefits that replace two-thirds of an employee’s average weekly wage up to a set cap. Under the Assembly plan, family leave benefits are funded by an employee payroll deduction of 45 cents a week for the first year, with subsequent contributions based on the fund’s costs.

It is encouraging that Governor Cuomo has also announced his support for paid family leave as a priority for the 2016 legislative session. The governor’s plan offers critical features including 12 weeks of job-protected leave and coverage of all employers with no exemptions. In addition, the governor has increased the wage replacement rate in his proposal, improving the ability of lower-paid workers to afford time with new babies and sick loved ones.  Without at least a two-thirds rate of wage replacement included in the Assembly bill and the governor’s new proposal, New York will remain a place where only higher-income people are able to take time to care for their families.

Even as a growing number of high-profile businesses are recognizing the benefits of paid family leave, the vast majority of working New Yorkers still do not receive paid leave through their employers. New York has much to gain from following the successful example of New Jersey and California and building a paid family leave insurance system that would provide up to 12 weeks of job-protected leave, paying benefits that replace two-thirds of an employee’s average weekly wage. Working New Yorkers deserve the time to care for their families.