Free the Vote: Cutting Red Tape from the Voting Process

For the first time ever, people around the country who love American democracy have decided to come together to observe a National Voter Registration Day on September 25, 2012 – a day to pull out all the stops in making sure that every eligible voter is registered and able to vote in this critical election year. Hundreds of non-partisan organizations have agreed to reach out to help hundreds of thousands of people get registered to vote, so that they can fulfill their civic duty as citizens and make their voices heard in November.1

This is an inspiring project that all of us should support. Yet, it also provides an important occasion for asking deeper questions about our voting system:

Why exactly are there so many Americans who are not registered to vote, and how can we improve our electoral system to get rid of red tape around the registration process and ensure that every eligible person is able to exercise the freedom to vote?

American democracy should be a model for the world. A legitimate government “of the people, by the people, and for the people”2 must vigorously promote and protect the freedom to vote so that all eligible voters can participate in this fundamental exercise in self-government.

But today, in the 21st century, too many bureaucratic barriers still block the ability of eligible persons to register, which in most states remains a prerequisite to voting. Our antiquated system puts the burden of registration on each individual, with unnecessarily restrictive registration deadlines.

The numbers tell the tale of how far we have to go in making sure all eligible persons can register:

Apart from the numbers, the stories of individuals caught up in red tape around voting underscore the need for reform.

Former U.S. Representative Lincoln Davis, of Tennessee, knows something about elections and government, yet this year when he went to polls in his hometown where he’d been voting since 1995, he was denied the right to vote.

“We walked in and they told me I was not a registered voter. I had been taken off the list . . . These are people who I grew up with. I told them I live here. I went to school about 20 yards away. . . .It’s always been this way and today, for some reason, they change it. I had a sense of uneasiness when I was told that I was not allowed to vote. They didn’t offer me a provisional ballot,9  or anything, just told me I wasn’t registered. . . . He said I would have to re-register, and I told them I’m already registered, I’m not going to re-register. I’m a former member of Congress, state senator, House member, mayor and all my life, I’ve been involved in the community, coaching Little League, participating in Boy Scouts and serving on boards here, and I’m denied the right to vote. It just doesn’t make sense.”10

All this makes clear that a major focus for increasing citizen participation in elections should be to decrease the bureaucratic barriers to becoming, and remaining, registered to vote. Americans deserve an election system that is much more responsive to their needs, and that facilitates their participation in democratic governance.

Many states still impose lengthy pre-election voter registration deadlines that may have been established decades ago, despite the proven effect of such deadlines in dampening voter participation.12 Many citizens become most interested and engaged with the election in the last few weeks before Election Day, when candidate debates are taking place, just as registration deadlines may be closing in their state. Other voters who are already registered may lose eligibility merely because they move to a different neighborhood or county, or because of clerical errors with their registration, or because of flawed and erroneous pre-election challenges to a voter’s eligibility.13 If they fail to discover the problem prior to Election Day, when the registration deadline has passed, they may be unable to vote. 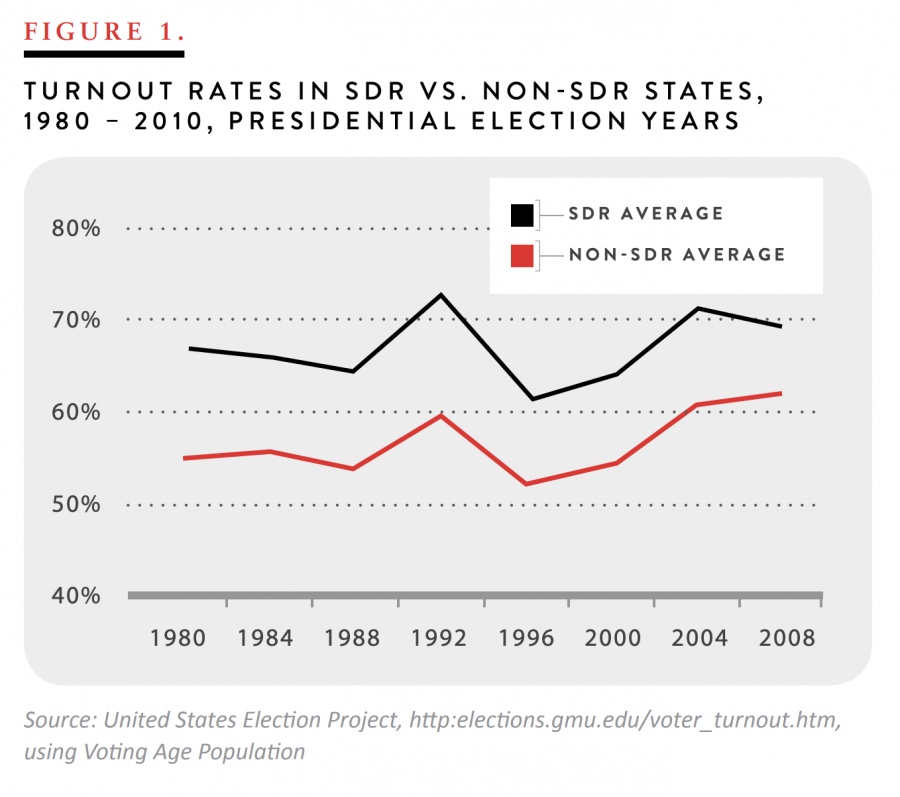 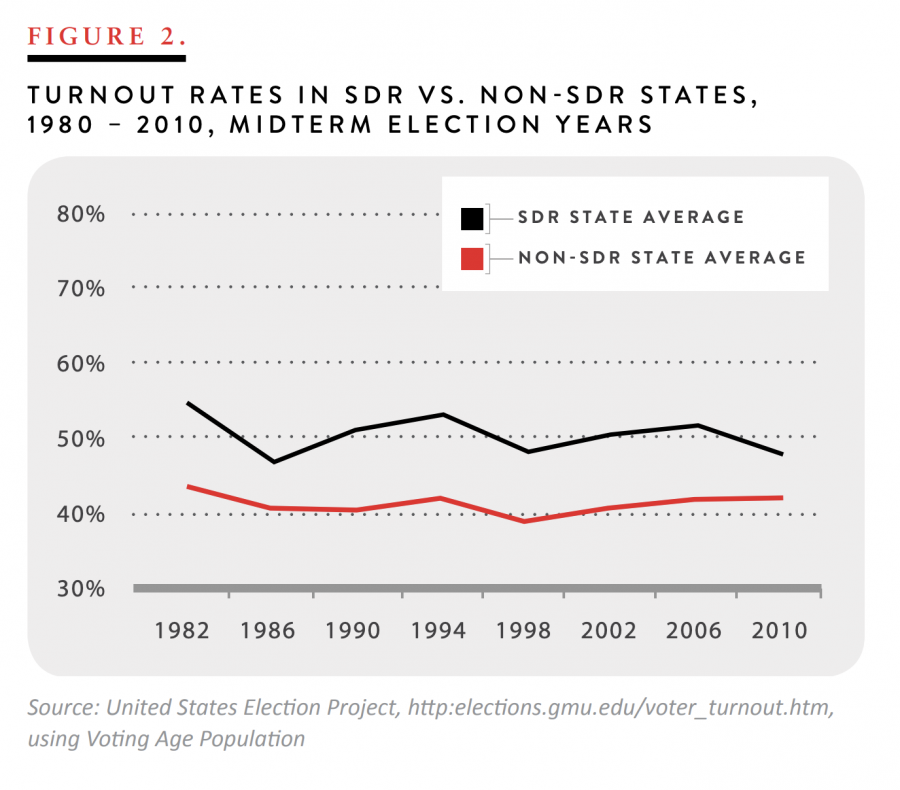 Experts have projected substantial voter turnout increases in states that have considered adopting Same Day Registration, with average voting projected to rise by over 4 to nearly 9 percent. Even greater increases are estimated for young people, low-income populations, people of color, newly naturalized citizens, and those who have recently changed residences (see Figure 3).

Same Day Registration is so popular with voters that an overwhelming majority of Maine citizens used a so-called “People’s Veto” on the November 2011 ballot to reinstate Same Day Registration after the nearly forty-year old program was repealed by the state legislature.19

Other Reforms to Modernize Voter Registration

Same Day Registration is just one element of the reforms needed to modernize our current system of voter registration. Our current system is archaic and inefficient, and badly needs modernization. It still relies on handwritten, paper forms that that can result in clerical errors and is needlessly expensive for states to administer.21 It leaves the burden on the citizen to negotiate the registration process and to update her registration again and again each time she moves.

We need policy changes that put the responsibility for registering voters squarely on the government by automating the registration process. Under a modernized voter registration system, eligible citizens interacting with the government will be asked if they consent to being registered to vote, and will be added to the rolls through a paperless process if they do. This shifts the administrative burden off of the individual voter and onto the government to register eligible citizens to vote. Delaware has implemented a version of this by providing for paperless voter registration for persons interacting with the motor vehicle bureau or public assistance offices.22

The need to update registration when a person moves is another major source of red tape in our mobile society. Almost 36.5 million US residents moved between 2011 and 2012.23 Low-income individuals are twice as likely to move as those above the poverty line.  Young people, moreover, are more likely to move than any other demographic group; between 2011 and 2012, 21 percent of young adults between the ages of 18 and 24 moved.24

We need to clear out the unnecessary red tape that still besets our voter registration system, so that every eligible person can exercise the freedom to vote. Sensible reforms such as Same Day Registration, automatic registration and portable registration will modernize our registration process and ensure that American democracy remains a model for the world.