Just as a postsecondary education has become essential for getting a decent job and entering the middle class, it has become financially out of reach for many of America’s young people. State support for higher education has decreased considerably over the past twenty years, while financial aid policies have increasingly abandoned students with the greatest financial need. As a result students and their families now pay—or borrow—a lot more for a college degree that benefits all of us.

The Great Cost Shift: How Higher Education Cuts Undermine the Future Middle Class, a new report by the national policy center Demos, examines how state disinvestment in public higher education over the past two decades has shifted costs to students and their families. The report outlines how such disinvestment has occurred alongside rapidly rising enrollments and demographic shifts that are yielding more economically, racially, and ethnically diverse student bodies. This fact sheet, produced jointly with the Research Institute on Social and Economic Policy at Florida International University, highlights Florida’s funding for higher education trends over the last twenty years.

HIGHER EDUCATION IN FLORIDA: AT RISK

Overall, Florida’s higher education system measures up well to other states. Tuition at both the state’s two-year and four-year institutions is relatively low and graduation rates—particularly at two- year schools—are relatively high. What these numbers do not capture, however, are the effects of the recent, dramatic erosion of state support for higher education, an erosion that sharply contrasts with the steadily rising support of the previous 15 years. Florida’s higher education system just experienced another year of budget cuts after already having suffered a 22 percent decline in funding between FY 2007 and FY 2012.1 The effects of these funding cuts are already beginning to be felt.

This year the University of South Florida is poised to join public universities in at least 20 other states where tuition revenue will cover a higher percentage of educational costs than state support.2

It is future students, however, who will bear the brunt of recent funding cuts. Since yearly tuition increases at the state’s universities are capped at 15 percent, basic budgetary math dictates that schools will likely have to cut back on faculty or services to balance their budgets, diminishing the quality of the education for future enrollees. The cuts have also led to another round of tuition increases at or near the rate cap, shifting an ever-greater portion of costs to families who, despite Florida’s relatively-low tuition costs, already pay an average of one-fifth of their income to attend a two-year college in the state.

The cost of this inevitable rise in tuition will not just be borne by students and their families, but by the state itself. Rising tuitions put Florida at risk of a shortage of college graduates necessary to fill the state’s jobs of the future. According to projections, 59 percent of all jobs in Florida will require postsecondary education by 2018,3 but only 43 percent of Floridians are projected to hold a college degree by 2025,4 leaving the state with a significant “skills gap.” Cutting funding for higher education not only compromises future prospects for Florida’s youth, but threatens the state’s overall economic growth and competitiveness as well.

Florida’s current funding per full-time equivalent (FTE) student is at its lowest level in two decades, the time period examined in “The Great Cost Shift”. Funding has fluctuated greatly over the past few decades, but there has been an especially large drop in funding per FTE since 2006-2007.

RISING COSTS TO STUDENTS AND FAMILIES

Largely as a result of reductions in state funding, Florida students today face higher costs in real terms to attend two- and four-year public colleges and universities than their counterparts did twenty years ago, forcing many of them to go into debt. In comparison to other states, however, average tuition and fees at Florida’s community colleges and four-year universities are below national averages.

While the state has increased funding for financial aid programs, a decreasing share of this aid has been invested in students with the greatest financial need. 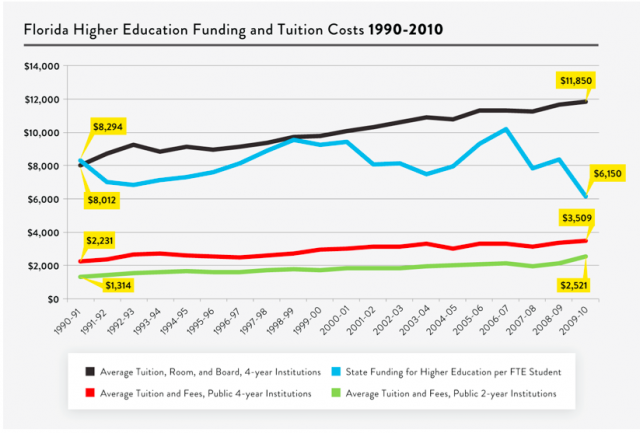 Reductions in state support for higher education detract considerably from the state’s commitment and need to increase the number of Floridians with postsecondary credentials.16 Rising college costs make it more difficult for students to enter college and complete, especially as many of them increase their work hours to pay for their education. Budget cuts also deprive institutions of resources to offer students better supports that could increase their chances of completion, especially as an increasing number of first generation college students make up a larger share of the college population. Though Florida’s young adult population has swelled, the college enrollment rate among high school graduates is still relatively low.17 And while the percentage of students who enroll and ultimately graduate from two-year schools is among the highest in the nation, the majority of two-year students don’t graduate.

Moreover, the fact that nearly two-thirds of young Floridians are pursuing a higher education shows that the state’s young residents are doing their part to prepare for the 21st century economy. Unfortunately, the, steep cuts in state funding for higher education recent years shows that public officials are failing to meet students half way.

Source of Financial Data: The Grapevine data set is the source of most of the budget data used in this factsheet. Grapevine series is collected by the Center for the Study of Education Policy at Illinois State University. Since 1961, the series has attempted to collect financial information related to higher education from states in a uniform way.

The central concept captured in the Grapevine series and in this report is “state support” or “state effort,” which reflects annual appropriations for the operating expenses of universities, colleges, community colleges, higher education agencies, state financial aid programs, and independent institutions of higher learning. Excluded are appropriations for capital projects, debt service, and revenues from federal aid, fees, and auxiliary enterprises. The idea is to get at the funds dedicated for the operation of direct educational programs.

About Research Institute on Social and Economic Policy RISEP conducts applied social science research on issues of concern to working families and low-income communities across Florida. At Florida International University we are a resource and a model for the University community by conducting problem solving research together with local communities that provides the tools for those directly affected to participate more fully in the public debate. RISEP is part of FIU's 40 year- old Center for Labor Research and Studies (CLRS), which has created a synergy between teaching and research. The Center, along with RISEP, provide cutting-edge research, first-rate teaching, and innovative training necessary for the globalized world of the 21st century.