Download the Full PDF
Image
Table of Contents
IN THIS PUBLICATION

These stories were taken from the thousands of stories submitted to the Consumer Financial Protection Bureau when they requested comments about private educational loans and struggles with student loan debt.

It's absurd to think that the average 18-year-old understands how to make an informed decision about financial commitments they may keep for life. I'm 32 and I am buried in student loans; my grandparents (who raised me) told me I had to take the loans if I wanted to go to college, but not to worry, they'd be the ones to pay it back when the time came.

Well, the time came, and so did the current financial crisis. Now my grandparents have their own financial problems, their assets are basically worthless, and I am in forbearance on a whole pile of varied private loans because I can't afford even the minimum monthly payments—and I have a full-time job!

Repaying my student loans was and is a nightmare. I lost my job in 2010, and asked for a deferment. The subsidized student loans had no problem, but the private loans (both handled through Sallie Mae) wouldn't budge. I still had to pay $200 a month (after I was gouged for my interest rate, but that's a different complaint). 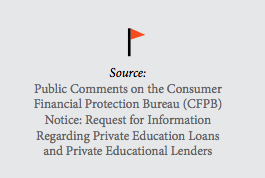 When I couldn't pay any more and had no more income, they still demanded payment. Even though the subsidized loans accepted a deferment form, the private loans told me I needed to file the same form with them but also pay $50 (my unemployment having run out 2 months before). They refused to have the deferment paperwork transferred over, and now they are threatening to take me to court. Since Sallie Mae isn't the original lender (B of A is), it's illegal for them to threaten me, but they do so anyway. When I told them to stop calling me because I submitted a deferment form that was approved, they refused to do so.

They called me several times a day, despite the fact that I've made it clear I'm homeless and don't even have anything I can sell. Then they threatened to garnish my paycheck if I ever did get a job again, etc. They probably made enough punishable violations to pay back most of the money they are trying to get from me. I had fully intended to pay them when I had an income, but it's now out of my hands.

I went to a State College in New Jersey, got very minimal federal aid and zero state aid to help pay for my tuition. I come from a single parent family where my mother refused to co-sign student loans for me, let alone help pay for my tuition. I was stuck getting the only loans I knew how to get without having a co-signer. Sallie Mae graciously approved my loan requests and hit me with 14% interest while in college where I worked full time and was a student full time. Now, three years out of college I struggle on a daily basis trying to pay my $600 loans on top of the rest of my living expenses since my parents have never been in the picture to help me out.

It it absolutely absurd that after 3 years I can't even consolidate the private loans I have without a co-signer. I did not go to school to be a doctor, lawyer, or scientist where having a huge student loan payment would be somewhat understandable. Something has to be done, students should not be punished for wanting to get an education. Everyone in this generation is set up for failure right out of college.

I graduated from college in 2007 from a state school and have about 30 thousand dollars worth of student debt. My after school life, trying to meet the repayment bills, and other bills is extremely rough. My vehicle just died, and my income is 76 dollars less than my bills are for the month. I have a very modest set of bills, nothing extravagant: rent, utilities, food, gas, college bills, and that's about it. I need a new vehicle, but have no way of saving money when I don’t make enough to pay my monthly bills. Starting a life, a real life, with $30,000+ is rough. With thousands of dollars worth of debt, creating a new business that may tank is a huge deterrent. Forgiving student loan debt would definitely help this country out.

I am a single mother of a four-year-old son. When I graduated UC Davis in 2008 I found a job as a Clinical Research Coordinator at the Biomedical Engineering Debt of UC Davis. The position was funded upon the renewal of grants and the pay was not enough causing my credit card debt to increase. I researched Master's programs and shadowed for two years before deciding to go back to school for a masters in Occupational Therapy.

With this career I found financial security with a great need in the community and great pay. I worked full time and went to school part time the first two years of the program but found myself climbing in debt with a $500 commute from my home in Dixon, work in Davis and school in Oakland plus a mortgage, car payments, daycare, diapers, food, car problems, the washer breaking, the heating unit all need to be replaced!

Regardless of my efforts to pay with my job I still needed to pull out student loans. My undergraduate and master's level education has now exceeded the worth of my house: over $120,000 in debt. Upon request I can give you the list of scholarships I have applied for but been refused over the course of three years. I have helped my younger sister who attends Sacramento State living in my house rent free to minimize her debt, something I never had the luxury of.

The debt keeps me up at night. Will I be able to afford my son's education? What if he gets ill or hurt? What will I use to pay his medical bills? Student debt is awful and the source of 90% of my stress. If I didn’t have such debt I would move and buy a home closer to my parents and my son would attend a Montessori style daycare; I would buy a safer car and my son would wear new clothes and not torn shoes and hand me downs. I pray U.S. will see the need to help its educated consumers.