Signed into law on May 22, 2009, the Credit CARD Act has benefited millions of households in ways that directly affect their monthly budgets. Demos’ 2012 National Survey on Credit Card Debt of Low- and Middle-Income Households finds that the Credit CARD Act empowers Americans to take control of their finances by increasing the transparency of credit card statements and dramatically reducing unfair and excessive fees and

penalties.1 New estimates show that the CARD Act has saved U.S. consumers $50.4 billion, or $12.6 billion a year, in fees alone.

For example, credit card statements must now include information on how long it will take to pay off the current balance if consumers pay only the minimum payment amount each month.

One third of households say they are responding to new information included on credit card statements by paying their balances down faster. 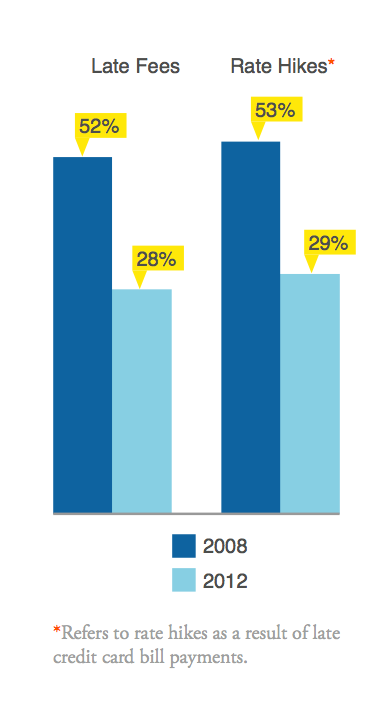 The Credit CARD Act requires credit card companies to provide 21 days between the time they mail a bill and when they charge a late fee. It also puts reasonable limits on late fees and interest rate penalties.

One of the most abusive credit card practices before the Credit CARD Act was imposing over-the-limit fees. Instead of denying transactions that exceeded a consumer’s credit limit, credit card companies used to process them and then charge consumers a fee—whether the consumers wanted to go above their credit limit or not. The Credit CARD Act requires consumer authorization for exceeding limits.

African American and Latino households were especially likely to report a decline in over-the-limit fees in the past two years.