The Climate and Community Protection Act

New York State’s Climate and Community Protection Act (CCPA) is a bold climate action policy for the people of New York. It requires a 50 percent reduction in greenhouse gas (GHG) emissions by 2030, and sets a timeline for achieving 100 percent renewable energy economy-wide by 2050. If ratified, this would be the strongest enforceable renewable energy standard and timeline in the country. Just as important, renewable energy goals under the CCPA are aligned with employment and equity goals for New York State residents, in 2 basic forms:

Developed and promoted by the 160-member New York Renews Coalition—and passed by the New York State Assembly for 3 consecutive years (2016-2018)—the CCPA is currently awaiting action in the New York State Legislature. Across the country, passing the CCPA is arguably the most significant opportunity we have for implementing bold, statewide climate policy—the significance of which is only magnified by the current tidal wave of federal attacks on environmental regulation and climate change policy. The CCPA does not have substantial immediate budget implications, but it requires the state to develop a comprehensive plan for achieving 100 percent renewable energy by 2050, with significant input from stakeholders in the most impacted communities and across the state.

Despite the urgent need for rapid greenhouse gas reductions and a comprehensive clean energy transition—as underscored sharply in the most recent report of the Intergovernmental Panel on Climate Change1 —it is reasonable to be concerned about the economic effects of these changes, welcome as they are. The fossil fuel industry and its advocacy allies are spending tens of millions of dollars annually to exploit this concern, not least by disseminating false information about the reality and causes of climate change as well as the economics of climate change and a clean energy transition. A familiar refrain in this reckless misinformation campaign is that climate policy is just another form of liberal “job-killing regulation.” But nothing could be further from the truth.

Ignoring climate change is the real job-killer in today’s economy, and this is very much the case in New York State. New York is well-positioned to reap employment gains and other economic benefits from the clean energy and clean economy transition promoted by the CCPA. In contrast to a number of states whose economies rely heavily on fossil fuel industries—in the Gulf Coast South, Appalachia, and the Great Plains—New York’s energy and employment profiles are among the least fossil fuel-dependent in the country. New York’s positive starting points on clean energy bode well for a successful and economically beneficial clean energy transition.

A combination of energy efficiency, renewable energy, and clean transportation investments, if fully scaled to achieve the CCPA’s renewable energy targets, promises significant employment and income gains for New Yorkers. This is especially true in light of New York’s relatively small fossil fuel workforce, as noted. The state’s fossil fuel workforce is comprised of about 13,000 workers in a total statewide workforce of nearly 9 million, according to estimates by the Political Economy Research Institute at the University of Massachusetts Amherst (PERI).2  While some fossil fuel job losses in the clean energy transition are probably unavoidable, financial support to help these workers transition to new employment should be part of the state’s plan for reaching 100 percent renewable energy economy-wide by 2050.

Overall, the jobs picture under the CCPA is overwhelmingly positive. PERI finds that a mix of renewable-energy and energy-efficiency investments sufficient to put New York on a pathway to 100 percent renewable energy and zero greenhouse gas emissions by 2050 would total about $31 billion annually over the first decade. PERI estimates that such investment will support 160,000 direct and indirect jobs initially and an average of about 150,000 in each year over the first decade, or the equivalent of roughly 1.5 million employment-years in total over the decade (by 2030, the number of jobs supported could decline slightly to 145,000 due to productivity gains). If you also count induced jobs—jobs created by the purchasing power of new clean energy workers—the total employment effect statewide is to create and support approximately 220,000 initially and 212,000 jobs on average over a decade, for a total of 2.1 million employment-years over a decade (see Table 1).3

Job creation, it should be underscored, generates additional income in communities, income that should be counted against costs in economic analyses of a clean energy transition. As we see in Table 2, employment in the main sectors for clean energy investment—renewables and energy efficiency—is well-paying, with average compensation of roughly $70,000 for workers without a 4-year college degree. Average compensation overall in these sectors is approximately $89,500.4 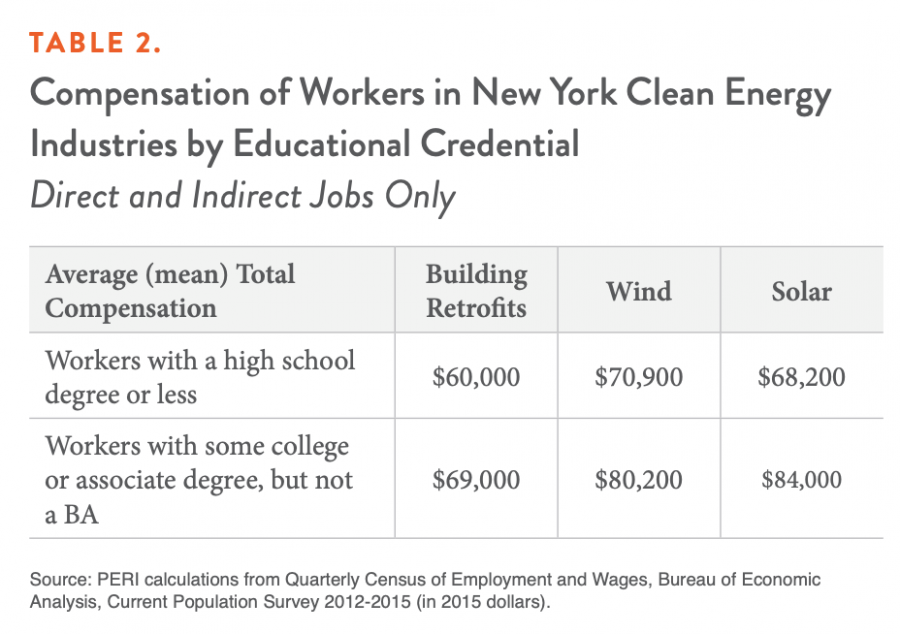 If the investment needed to achieve New York’s renewable energy goals as codified in the CCPA can be projected to create about 150,000 new direct and indirect jobs over a decade (or 150,000 employment-years annually), the clean energy transition will generate approximately $11.3 billion for clean energy workers across the state per year.5  If induced jobs are also counted, the income generated by direct clean energy jobs and related indirect and induced employment can be projected to total nearly $13.8 billion per year or approximately 1.3 percent of state GDP, and $138 billion cumulatively over a decade (see Table 3).6 From 2031 to 2050, PERI estimates job creation in a range of 50,000-90,000. If we average this out to 70,000 jobs, or the equivalent of 1.3 million employment-years over the 19-year period, clean energy investment will inject approximately $98 billion in additional income into New York’s economy in the second and third decades of the clean energy transition. Over the 30-year period from 2020 to 2050, income generated by the CCPA for New Yorkers will total approximately $236 billion.

Workers without a 4-year college degree hold approximately 55 percent of jobs in the renewable-energy and energy-efficiency sectors. Thus, a majority of new employment generated by clean energy investments under the CCPA policy will benefit working-class residents as defined by education level, generating approximately $5.8 billion annually in working-class income from direct and indirect clean energy jobs in the New York State economy over a decade. Women and people of color, however, are not proportionately employed in clean energy sectors—26 percent and 33 percent, respectively; if the CCPA establishes strong standards for diversifying employment and contracting in programs and projects that contribute to the policy’s emissions goals, this could have positive effects in closing harmful employment gaps by race and gender.7

The CCPA requires that 40 percent of public money invested toward the policy’s renewable energy goals be targeted for environmentally vulnerable, low-income communities—a hallmark of this policy. If we estimate that one-third of investment for the energy goals will be public or publicly subsidized, the CCPA’s 40 percent equity mandate will support the creation of approximately 21,000 jobs, or 210,000 job-years over a decade, in high-need communities. In these communities, workers without a 4-year college degree will enjoy roughly $14.7 billion in clean energy income over a decade under the CCPA.

The CCPA’s clean energy transition will also generate broader economic benefits, in several dimensions. For example, only about 10.5 percent of New York’s primary energy needs are supplied by in-state sources such as hydropower, biofuels, and renewable energy. Almost all of the refined petroleum products used by New York residents are imported from other states. Out-of-state energy expenditures averaged approximately $38 billion per year between 2005 and 2015 and totaled more than $427 billion over that period.8

Getting to 100 percent renewable energy will require substantial insourcing of power production, mainly from on-site renewable sources such as wind and solar. Even more significant, reducing reliance on imported transportation fuels by establishing stringent fuel efficiency standards and promoting electric vehicles will generate substantial savings for New York State drivers. In both dimensions, the in-sourcing of energy will not only reduce the state’s overall energy bill, it will also generate localized economic activity and supply-chain effects promising even more economic activity. For example, energy storage services, already a nearly $1 billion industry supporting nearly 4,000 jobs across New York, is likely to grow proportionately with renewable-energy expansion. Under New York’s own stated clean energy goals (which are broadly aligned with the CCPA, but not currently enforceable), a recent estimate from the New York State Energy Research and Development Authority projects an energy storage workforce of as many as 27,000 workers and revenues of as much as $8.7 billion annually by 2030.9

In addition, new tax revenue from clean energy jobs and businesses will generate fiscal savings for the state. Healthcare savings and likely reduced enrollment in social benefit programs (in significant part due to improvements in health) will also benefit New Yorkers. Along with these benefits, the potential for community ownership of distributed renewable-energy generation—a key principle of the NY Renews platform—could be a source of asset-building in low-wealth communities.

The bottom line is exceptionally clear: New Yorkers will enjoy substantial economic gains under a comprehensive clean-energy transition. Thus, the self-interested question proffered by opponents of clean energy and climate change policy is literally turned on its head: how can we afford not to achieve zero emissions by investing in a complete and accelerated clean energy transition? That’s what our elected leaders should be asking themselves—and many are—if they care about economic growth, opportunity, and well-being for the people of New York State.