Early Education for All: The Promise of Universal Preschool in NYC & Beyond 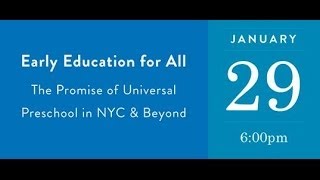 A compelling vision of free, high-quality preschool for every child in New York City helped to propel Bill de Blasio into the mayor’s office. Expanding early education so that every four-year-old can have a slot would be no “band-aid solution,” the Mayor asserted, but “a game-changing investment.” Given the findings that quality early education for all reduces inequality, boosts educational achievement, and improves children’s life chances, the investment could be a powerful step towards building upward mobility for the next generation.

This event was hosted by Demos and The American Prospect, discussing the promise of universal preschool and what quality early education would mean for New York and the nation.