Debt Collectors Are More Likely To Go After Black People

A new survey finds that African-Americans are much more likely than whites to be called by debt collectors, despite both groups reporting relatively equal levels of debt and repayment rates.

Just take a look at this chart: 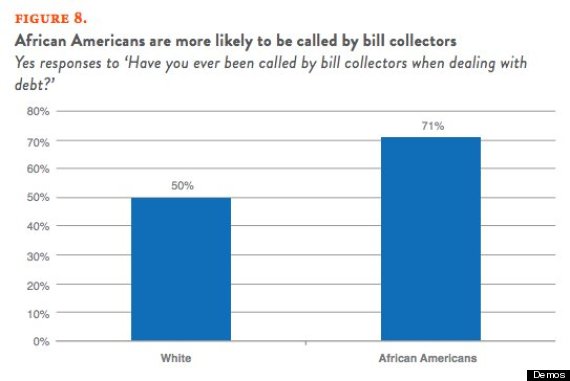 So what gives? It's not clear exactly why debt collectors seem to be going after one race more than the other, but the study's findings could be the result of one unfortunate reality: Black Americans tend to have lower credit scores than white Americans, research has shown. And that gap got wider as a result of the financial crisis -- subprime lenders were more likely to target African-Americans during the housing boom. Those loans, with higher interest rates, were more likely to default. The result: credit scores that could be marred "decades," as the Washington Post pointed out in 2012.

Read the full report: The Challenge of Credit Card Debt for the African American Middle Class