The Challenge of Creating Good Jobs

In their new book, "Good Jobs America: Making Work Better for Everyone," Paul Osterman and Beth Shulman argue that the United States needs to worry about not just creating millions more jobs but also ensuring that the jobs are good ones.

By good jobs, the authors mean jobs that pay enough to support a family and provide decent, safe conditions. The authors voice concern that many middle-class jobs have disappeared or deteriorated into low-wage ones that cause families to fall below the poverty line.

Taking a view contrary to that of many economists and politicians, they argue that government can and should play a vigorous role in encouraging employers to create good jobs - perhaps by providing tax incentives that require employers to pay a living wage.

Mr. Osterman is a professor of human resources and management at the Massachusetts Institute of Technology, and Ms. Shulman, who died last year, was a senior fellow at Demos, chairwoman of the National Employment Law Project and co-chairwoman of the Fairness Initiative on Low-Wage Work.

Here are excerpts from an interview with Mr. Osterman.

What would you recommend that President Obama and Congress do to create more jobs?

I strongly want to argue you should not just talk about creating jobs but the quality of the jobs you create. The general point I would make is there's a shortage of economic demand, and as a result, the government needs to create jobs directly.

The critique of that is, one, that it's wasteful. The image is the government pays you to dig a hole and pays me to fill it up. There is a lot of work that's not like that, whether it's building infrastructure or being day-care teacher or health-care provider, work that provides lasting benefits to society.

The other critique is this would crowd out private-sector jobs. When the economy has slack resources - and right now we have a high unemployment rate and low interest rates - it's not true that you'd be crowding out jobs. 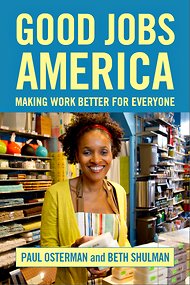 What do you mean when you say good jobs?

The concept of what are good jobs is very broad. We can talk about wages, about benefits, about autonomy at work. In the book we make it simple: we talk about wages. We look at two standards. One standard is two-thirds of the median wage. (The median wage is $17.60 an hour, the book says, and two-thirds of that is $11.73.) That's a standard used internationally and in the states. If you're below that, if you're that far from the average, you're really in difficulty in society.

The other standard is whether wages for a full-time worker are below the poverty line for a family of four. (That's $10.60 an hour.) Nearly 20 percent of American adults work in such poverty-level jobs. That's a remarkably high percentage.

Many people question the wisdom and efficacy of having government adopt policies to create good jobs. Many people say, for instance, if you get a good education, then don't worry, you'll find a good job.

One objection we hear is that these bad, low-wage jobs are transitory, that people just move through them on their way up. But that's not true. Overwhelmingly adults stay in these jobs for years and years. It's not Horatio Alger. It's not transitory.

Then there's the objection people raise that we can solve our problems through education. I don't want to get in a box and say education is not important. But if you do a thought experiment and say all of a sudden, everyone has a degree from a community college, all these jobs won't suddenly go away. There will still be jobs for janitors, jobs cleaning hotel rooms and chopping lettuce that goes into your salad. The question is, how much are they going to pay?

Then you also hear that the government shouldn't be making employment standards. The book makes the point that you've always had labor market standards and that there's broad support for that ever since the Shirtwaist Fire a century ago.

Another objection you hear is that if you try to raise the floor in the labor market, you'll kill jobs. That's what you hear all the time about the minimum wage, but if you review the research on the minimum wage, the effects are a lot less scary than opponents make you believe. And if you look at France and Germany, which have a far lower percentage of workers in low-wage jobs, the employment to population ratio for adults is much better than we have in the United States.

In your book, you say corporations and other employers play a central role in determining whether the jobs that are created are good jobs or not good jobs. Can you discuss that?

The book does not take the stance this is all about evil employers. It's much more sympathetic than what you hear from some people. Employers are under intense competitive pressures. There are bad employers out there, there are employers that violate minimum wage and overtime laws, but they're certainly not a majority. The fact that employers are under intense competitive pressures doesn't mean you let standards be driven downward. You want to push the floor up.

At the same time, the human resources departments of most firms have been weakened. In many American companies, human resources is seen as the least prestigious function, a residual function. And labor unions are no longer in as strong a position to push for other behavior, to stop this drift downward in employment standards.

What would you do to help ensure that companies do indeed create good jobs?

What you need is a strategy, carrot and stick, in setting standards and positive incentives to raise the floor and assistance to firms in doing so.

Government, historically, in the United States has been very influential in setting employment norms. At the turn of the 20th century, it was civil service reform, and that became a model for private-sector corporations. During World War II, the War Labor Board was influential in shaping the labor market and labor peace.

Government can play an important role in incentivizing and modeling good behavior. It can use its zoning power or community benefit agreements so that if someone wants to build a large project and needs zoning approval, the government can set a wage standard as a condition for approval - for the construction jobs as well as the resulting jobs. Or if you use tax incentives to attract companies to your area, it should be required that those companies pay a living wage. A number of states have done that. Or if government outsources jobs, a living-wage standard should be applied to jobs that get contracted out.

There have been a number of experiments at the state level to provide tax incentives to encourage companies to train front-line workers. With training, workers could go from cleaning hotel rooms to being a line cook or waiter.

In a variety of ways, governments can play a positive role and do so by walking the talk themselves.