Work-Family Dilemmas of the Rich and Famous 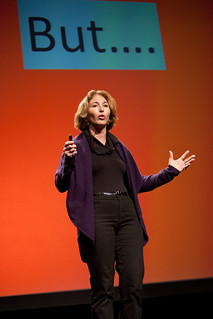 Why does one person’s take on an enduring, omnipresent issue sometimes explode through the media din?

When that person is Anne-Marie Slaughter, whose piece in the Atlantic about whether women can have it all (spoiler alert: we can’t!) seemed to got almost as much attention as the health care ruling (163k likes on Facebook, oodles of responses in media outlets left, right and center), the reason isn’t that she had anything particularly new to add. Though many of Slaughter’s points are good ones -- change the culture of face time, value families, redefine what success looks like -- they’ve all been made before.

Instead, the Slaughter phenomenon has to do with our ongoing fascination with what I call the problems we wish we had. Hers is the latest in a vast and vastly popular literature that examines the decisions of elite professional women. You know the stuff: should she or shouldn’t she leave her partnership at the white-shoe law firm to stay home with her kids? Or, in Slaughter’s case: should she have left her dream job as the director of Policy Planning at the State Department in the Obama Administration to return to her gig as a tenured Princeton professor, who appears regularly on TV, gives 40 to 50 speeches a year and writes regular columns?

We’ve spent much of the past decade consuming media that depicts women as awash in choices: to work, comfortably stay home, or any of a range of possibilities in between the two. Riveting though it may be, this storyline is, for most women, escapist fantasy. In truth, only a privileged few have anything but the first option. And all too often, the “choice” of work entails a time commitment and an inflexibility that, like Slaughter’s Washington job, keep women away from their families more than they’d like. And vanishingly few women have the resources (both in terms of money for childcare and a devoted, available co-parent) that Slaughter has. She makes a glancing reference to these hordes, but the media frenzy over her dilemma pretty much drowns out the attention paid to real problems of real women – and thus action toward solving them.

This is not to say the highest achieving women are not important. Clearly, we have a lot to learn from the challenges and worries of highest fliers, whose story has been one of the central dramas of feminism. The women who fought their way into the bastions of male power, the corporate and professional worlds, were and still are fighting a pivotal battle. In even coming close to the glass ceiling and nearing professional parity, they have shown the rest of us what’s possible. And to whatever extent it’s happening, their exit -- or even slight backing away -- from the most respected and powerful jobs is an important reflection of the failure of high-level employers to accommodate their employees’ caretaking responsibilities. (Frankly, it’s hard to imagine anyone -- male, female, parent or no -- who could manage to have a life outside the kind of giant job Slaughter held.)

And I’ll admit there’s a certain thrill in reading about Slaughter’s 14-hour days, waking before the sun to report to two other mega-stars: Hillary Clinton and her chief of staff, Cheryl Mills. It’s like Work-Family Dilemmas of the Rich and Famous. We’ve been riveted by such dramas playing out in the public eye before: When Michelle Obama spoke recently of having to take baby Sasha with her to a job interview, say, or, as Slaughter mentions, when Mary Matalin stepped down after two years in the George W. Bush White House. Then there’s Sheryl Sandberg, who’s almost as famous for her Ted talk on motherhood as for her lofty perch at Facebook.

Yet our fixation on high-profile mothers and their employers speaks more to the problems many women wish they had than to the ones they actually do have. The elite are, of course, a minority -- and women are a minority within the elite. Women make up about 15 percent of board members and corporate officers of Fortune 500 companies, for instance. And the majority of women in this professional echelon are childless—a fact that speaks sad volumes about the ability of big business to accommodate care-taking.

No doubt, part of the reason we obsess about successful, high-earning mothers is that our fantasy of their lives is much more fun to ponder than the reality of most of ours. Even before the economy crashed around them, most women would have been lucky to have the headaches with which Slaughter contends. It’s certainly more pleasant than dwelling on the narrower and less cushy range of alternatives available to the vast majority of women.

But this obsessive focus on our fantasy problems comes at the expense of our real ones: The continuous struggle to find enough time and money to keep our families and work lives together -- dilemmas we have to work out with our employers, not theirs. The truth is: Women with high-paying jobs are far more likely to get flextime, paid vacations, paid maternity leave, and sick days than are women with lower-paying ones, despite the fact that lower-income workers can least afford to be docked pay or lose a job. Similarly, lower-income workers who are least able to pay for child care have the least access to these benefits through an employer. They’re also less likely to accommodations that allow them to breastfeed.

Clearly, part of the problem with the voluntary approach we’ve taken in the United States to these benefits is that, while employers of a small, lucky segment of women are willing to provide them, most everyone else is not.

There’s no harm in indulging in a little fantasy now and then. We just need to be clear -- especially when when it comes to addressing work/life strains -- that, for most parents, the exciting stories we eat up about high profile moms have little to do with reality.