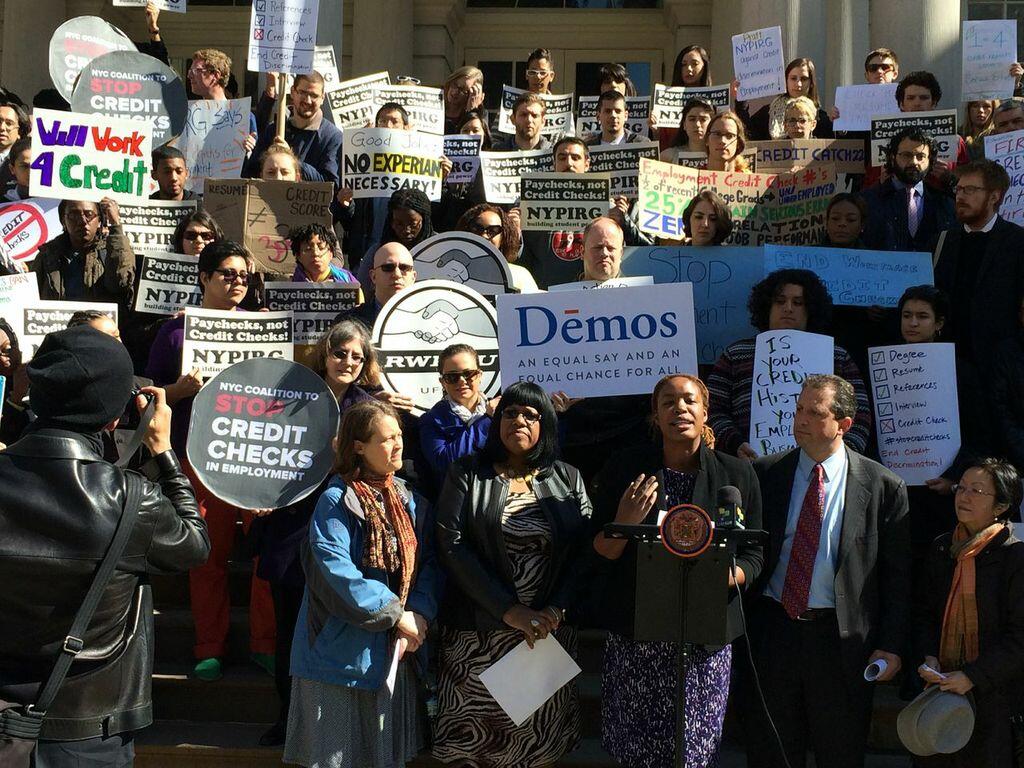 “How can you pay your debt, if you can’t get a job?” That’s the straight-forward question Council Member Debi Rose asked on the steps of New York’s City Hall this morning, as she stood up as a lead sponsor of legislation which would ban discrimination against job applicants and employees based on their personal credit histories.

The practice of using credit checks as part of the employment application process is pernicious – often preventing people from disadvantaged backgrounds, who are more likely to have a bad credit rating, from getting a job; it also impacts college graduates, who are coming out of school with unprecedented debt levels. The bottom line is that this practice is keeping people who want to work, and who can work, from working, for no justifiable reason. Let’s end it now.

Demos’ research on employment credit checks backs up the Council Member’s point: credit checks keep qualified workers out of a job. Despite a lack of evidence linking personal credit history to job performance or a likelihood to commit fraud or any other crime at work, nearly half of employers report that they use credit checks to screen job applicants for some or all positions. The reason is simple: the nation’s for-profit credit reporting companies, which developed credit reports as a tool for lenders, have sought new markets for their product and aggressively marketed them to employers—evidence be damned.

As Demos’ 2013 study reveals, credit checks in hiring have a discriminatory impact on people of color whose credit histories may reflect the damage done by predatory lending that continues to target communities of color, as well as the enduring impact of racial discrimination in employment, lending, education, and housing. We also find that weak credit history is often linked to medical debt and unemployment. And then there are the errors: a study by the Federal Trade Commission this year found that 21 percent of consumers had a material error on a credit report, with unpredictable effects on hiring.

New York City will not be the first jurisdiction to restrict the use of credit history in hiring—ten states have already taken action to restrict the practice. But as the New York Times noted in an editorial, these laws are full of unjustified exemptions that need to be tightened. By passing legislation without industry carve-outs, New York is poised to be a progressive leader in ending a particularly insidious form of employment discrimination.

On the steps of City Hall this morning, Debi Rose was joined by the bill’s main sponsor, Council Member Brad Lander, as well as City Council Members Ydanis Rodriguez, Margaret Chin, Mark Levine, Carlos Menchaca, Corey Johnson, and Helen Rosenthal, who are among the bill’s co-sponsors. Members of the NYC Coalition to Stop Credit Checks in Employment, including unions like RWDSU and DC37 as well as organizations such as NYPIRG, the New Economy Project, the NAACP Legal Defense and Education Fund, Retail Action Project, Demos and a host of legal services organizations were out in force.

The message was clear: the time has come for New York City to stop employment credit checks and be a leader in the fight to end employment discrimination.