If you need an illustration of why the redistricting process matters, North Carolina is instructional. Over the weekend, thousands descended upon Raleigh, North Carolina for the “Moral March” led by the multi-racial, intergenerational Forward Together movement, which bands together over 150 grassroots organizations representing a plethora of issues including: economic inequality, racial inequities, educational disparities, women’s reproductive rights, healthcare access and civil rights.

An expansion of Republican domination of the state government led to an avalanche of conservative laws passed in 2013 affecting each of those issues—and to the disadvantage of women, students, people of color and low income.

And just in case any of those constituencies decided to take their anger to the polls, and to the opposing party, Republican lawmakers created a fix for that as well. Last year, they passed a “monster” elections bill that imposes a punishing set of restrictions on voters: a strict photo ID requirement to vote, cuts to the early voting period, elimination of Election Day voter registration, and expanded powers for independent poll monitoring groups (like True the Vote) to challenge voters’ eligibility.

It was no surprise, then, to see so many people at the march holding posters promoting restoration of the voting rights they had before the conservative takeover. Among them were signs calling for redistricting reform, which is probably one of the most troublesome sources for all of the other problematic bills passed by Republicans last year.

A lawsuit currently pending before the state supreme court hopes to correct the racial gerrymandering cooked into redistricting maps drawn by Republicans in 2011. In those maps, congressional and legislative districts where black, white and Latino residents voted in unison for Democrats were split up so that voters of color were packed into racially segregated districts. White voters, meanwhile, were added to Republican dominated districts where they’re numbers are now perhaps too small to vote for candidates of their choice.

Rev. William J. Barber, the leading voice in the Forward Together and Moral Monday movements in North Carolina has been in litigation with the state since last year over the maps, which they argue are racially discriminatory and so confusing they’ve already started creating real disenfranchisement

According to Bob Hall, executive director of Democracy North Carolina, over 2,500 voters from seven counties they monitored may have lost their voting rights in 2012 because of the way new district lines “zigzagged” through precincts and neighborhoods in the quest to split black and white voters. Hall called it “computerized apartheid” and it’s hard to argue that such a label is hyperbole. 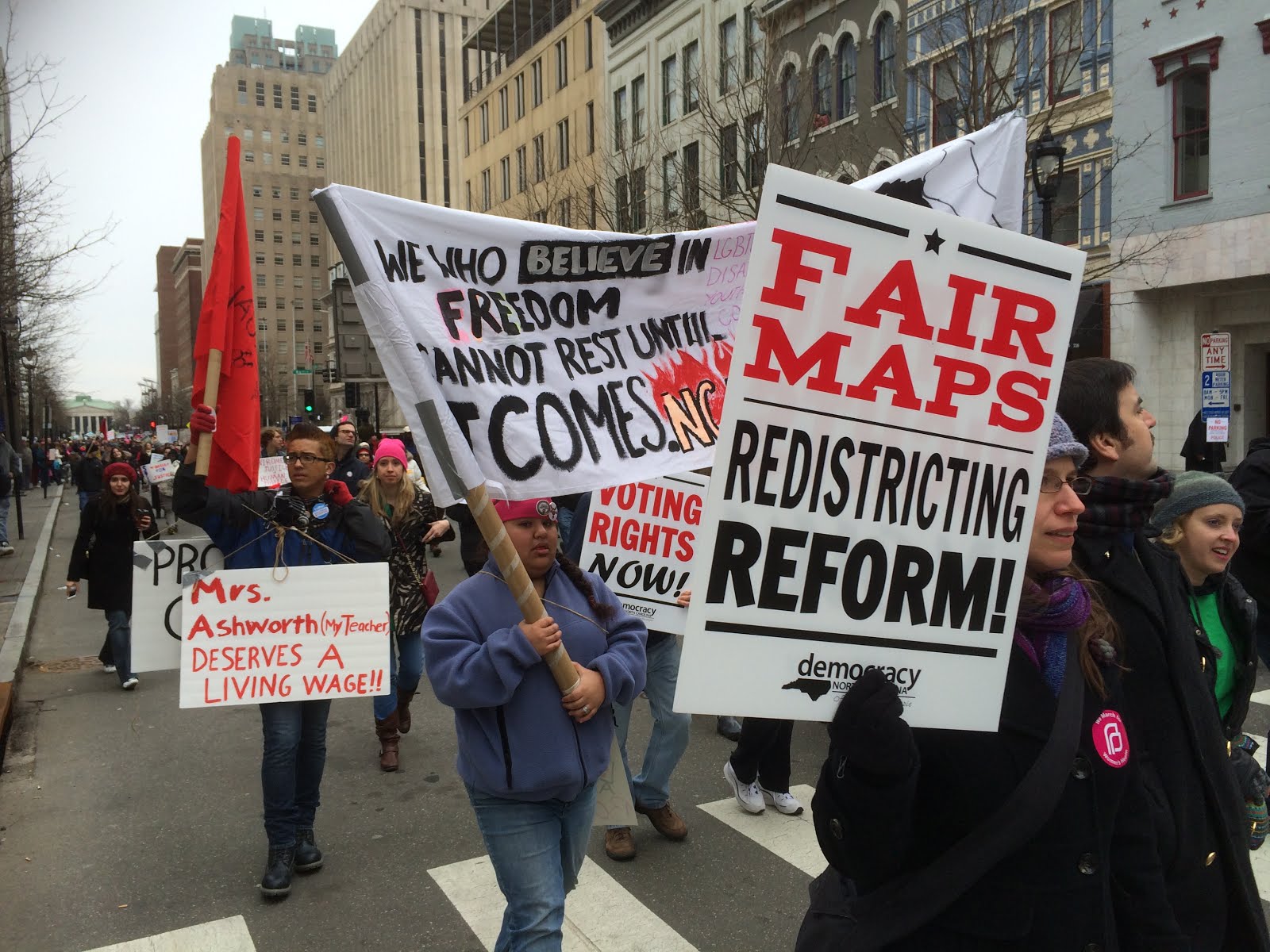 African American voters were packed into roughly three congressional districts, including one gangly area that carves in black voters from three separate counties. Before the 2011 redrawing, which lower state courts have upheld, Democrats had a 7-6 edge among the states 13 congressional districts. But today, Republicans have a 9-4 edge based on their redistricting work. There is no correlated increase in Republican voting that justifies the widened difference. In the 2012 elections, 51 percent of votes went to Democratic candidates. The same widening partisan advantage was seen in state legislative districts as well due to the new maps.

As reported by my colleagues Chris Kromm and Sue Sturgis over at the North Carolina-based Facing South blog, a plan to push control of state affairs into corporate hands has been in the works since just before 2010. During that period, the millionaire Art Pope helped finance a conservative power grab of the state legislature -- an event that dovetailed with the broader Tea Party takeover of 2010 in dozens of states across the nation, and also Congress.

In North Carolina, advocacy groups and political action committees like the Civitas Institute and Civitas Action fueled this takeover with funding from the millionaire Art Pope, a conservative philanthropist who operates much like the Koch Brothers for conservative organizations like Americans for Prosperity.

With Republican majorities in the state House and Senate—for the first time since Reconstruction—they had default control over the post-Census redistricting process. They took full advantage of that and, with the help of Pope’s expanding financial and political influence, they created legislative districts that would lead to the super-majorities they obtained in the 2012 elections. To illustrate this in numbers, after 2010 Republicans held a 68-52 House and 21-19 Senate advantage in the general assembly. After 2012, those became 77-43 House and 33-17 Senate advantages.

If that wasn’t enough, Republican Pat McCrory was elected governor in 2012, replacing Democratic Gov. Beverly Purdue, who chose not to run for re-election.

Come 2013, Republicans owned the legislature and the governor’s mansion, and wasted not time passing laws that:

Topping it off is the elections bill they signed which has a photo voter ID requirement so tough that it could disenfranchise upwards of 318,000 voters, most of them women of color. The voting bill includes so much potential for racial discrimination at the polls that the U.S. Department of Justice has joined civil rights group in a federal lawsuit declaring it a violation of the Voting Rights Act.

Some of those civil rights groups, like the NC State NAACP Conference and the Southern Coalition for Social Justice, are the parties suing the state over the redistricting maps. This case can’t be overlooked because absent Republican-orchestrated redistricting and gerrymandering much of the conservative agenda listed above may have failed.

How it happened in summary:

This is why Rev. Barber and the Forward Together movement was able to draw so many people to the state capital over the weekend. It was a preview of the kind of mobilization civil rights advocates hope to see at the polls this year, for the mid-term elections. This is why redistricting matters.