Why Happiness Can Fall as GDP Rises

Eugenio Proto and Aldo Rustichini have written a new column for VOX in which they argue that once GDP per capita reaches a certain level, it actually begins to correlate with lower life satisfaction. 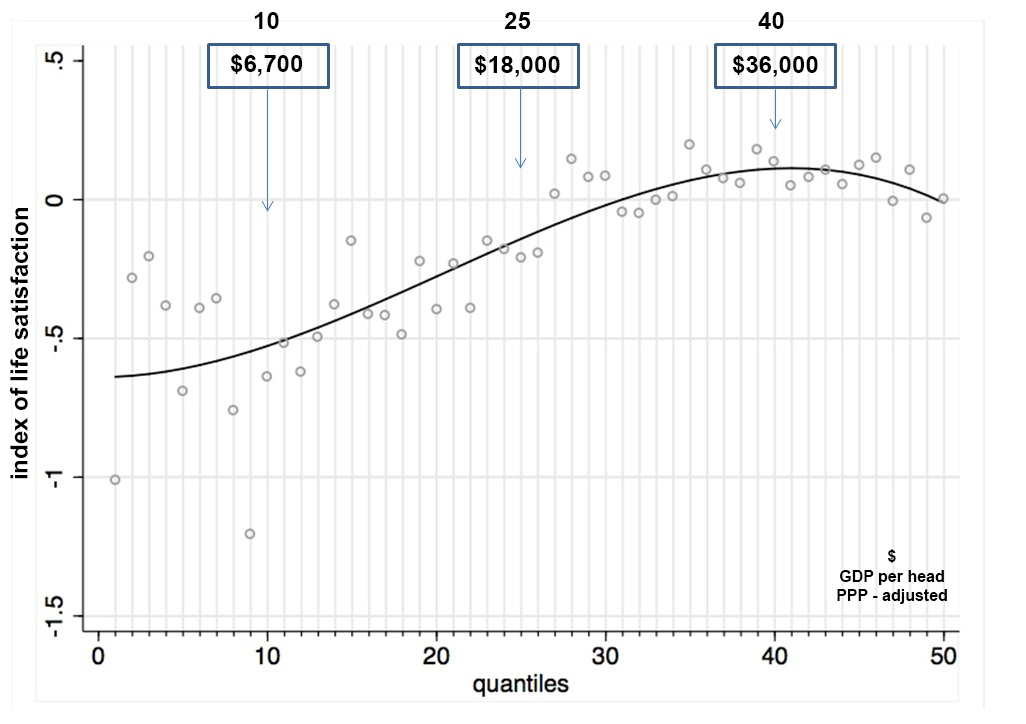 Of course, this result shouldn’t be too surprising; GDP is a measure of economic production, and an excellent measure at that. But as Robert Kennedy noted in his 1968 speech,

Our Gross National Product [a measure of economic production that considers ownership rather than geographic location], now, is over $800 billion dollars a year, but that Gross National Product - if we judge the United States of America by that - that Gross National Product counts air pollution and cigarette advertising, and ambulances to clear our highways of carnage. It counts special locks for our doors and the jails for the people who break them. It counts the destruction of the redwood and the loss of our natural wonder in chaotic sprawl. It counts napalm and counts nuclear warheads and armored cars for the police to fight the riots in our cities. It counts Whitman's rifle and Speck's knife, and the television programs which glorify violence in order to sell toys to our children.

Simon Kuznets, the Nobel-prize winning economist who developed GDP, wrote in The New Republic, “Economic growth involves a variety of costs that must be recognized. Because of this, “goals for ‘more’ growth should specify more growth of what and for what.”

When people talk about GDP, they rarely understand the limitations of GDP as a measure of progress. GDP does not account for the social or environmental consequences of growth, nor the economic sustainability of growth. It doesn’t consider whether we’re producing bombs or butter. It doesn’t consider whether our economic growth may be coming at the expense of consumer safety, a worrying problem in the wake of the contaminated water in West Virginia.

For poor and developing countries, positive GDP growth serves as a proxy for eliminating immiseration. For a developed country, immiseration is not as great a threat, and environmental and social sacrifices that may have been tolerated for growth are no longer countenanced. Already countries like Brazil, China and India are worrying about the environmental consequences of untrammeled growth. In American, people want more time with their families and shorter commutes.

A better measure of what matters is the Genuine Progress Indicator (GPI), which takes into account 26 economic, social and environmental indicators. States across the U.S. are beginning to implement GPI, and they’ve discovered that much of their recent GDP growth hasn’t budget the GPI. Here’s what it looks like in Vermont: 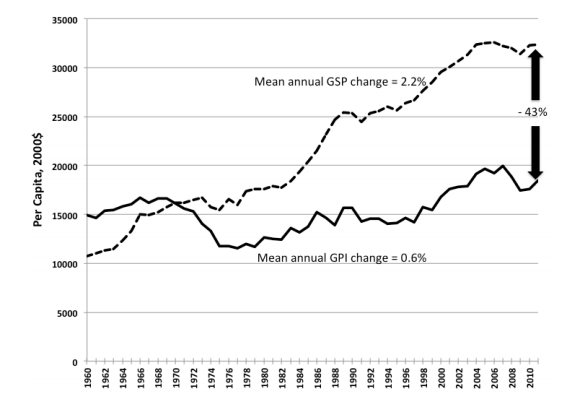 Eric Zencey, a key architect of Vermont’s move to GPI and one of the economists who is developing it with the Gund Institute, told me, “sound business practices requires deducting costs from benefits. We can change the conversation to what matters.” Here’s what GPI looks like for the U.S. as a whole: 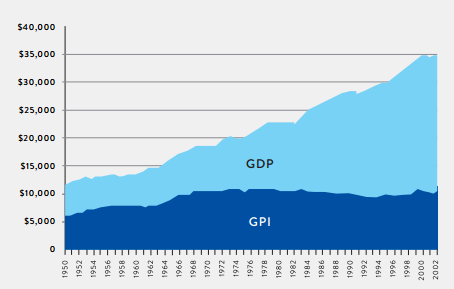 This helps explain why GDP is divorced from life satisfaction for developed nations.