Why Demos Filed a Complaint in North Carolina Today

In recent years, North Carolina has come under considerable public scrutiny for its failure to protect and promote the right to vote. When Art Pope and his acolytes took over North Carolina state government after the 2012 elections, we all know what happened. Among many other things, the state enacted a raft of voter-suppression measures—eliminating same-day registration, reducing early voting, and establishing a strict voter ID law. At the same time, the number of voter registration applications originating from public assistance agencies took a nosedive.

Earlier this year, Demos sent two notice letters Kim Strach, the North Carolina Secretary of State, informing her that the state motor vehicle office and public assistance agencies were failing to comply with their voter registration obligations under Section 5 and Section 7 of the National Voter Registration Act of 1993 (“NVRA”). And, today, Demos and other voting rights advocates filed a complaint on behalf of Action NC, Democracy North Carolina, the North Carolina A. Philip Randolph Institute, and three North Carolina voters to pursue these claims in federal court.

Sections 5 and 7 of NVRA require, respectively, that motor vehicle offices and public assistance agencies provide specific voter registration services to individuals whenever they apply for or renew public assistance benefits, driver’s licenses, or state-issued identification cards, as well as when they report a change of address to the relevant state agency. However, interviews and records indicate that North Carolina is failing to uphold its Section 5 and Section 7 obligations.

North Carolina DMVs across the state have failed to transmit voter registration information to elections officials—resulting in large numbers of individuals being denied their right to vote. Our three individual clients all visited a North Carolina DMV in 2014 before the voter registration deadline for the November General Election.  However, the similarities of their experiences did not end there:

Demos has worked in North Carolina before. In 2006, upon noticing a drop in public assistance voter registration applications, Demos and other voting rights groups approached the Executive Director of the State’s Board of Elections to convey that North Carolina had a serious compliance problem. The result was a cooperatively developed NVRA Implementation Plan that dramatically improved the state’s compliance with Section 7 for several years and which was held out as a model for other states to follow.  This success resulted in real people, primarily low-income Americans, being offered the opportunity to engage and participate properly in our democracy for the first time. 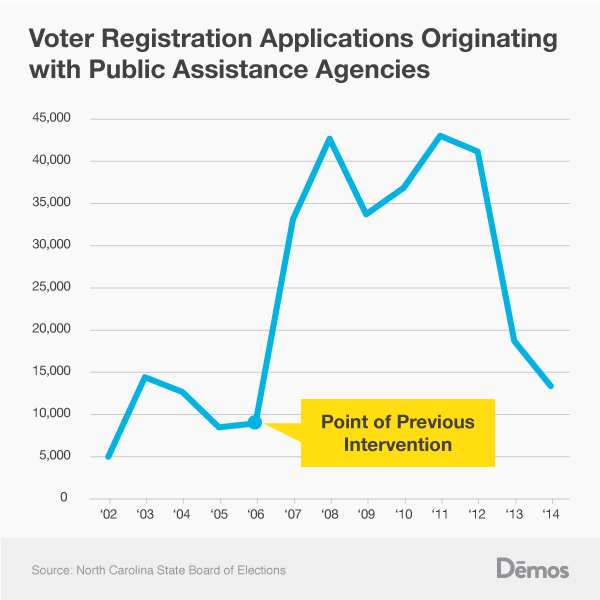 The NVRA was passed “to establish procedures that will increase the number of eligible citizens who register to vote in elections for Federal office.” It is our hope that the litigation commenced today will help advance that goal and allow the true benefits of democracy to be felt in North Carolina.

We Can Still Save Our Democracy Before November

Many state officials are stubbornly clinging to outdated, unsafe election procedures. For the health of our communities and our democracy, they should commit themselves to the three pillars of our voting rights agenda.
Blog
Chiraag Bains
Image

A toolkit to help local leaders and communities identify and act on the warning signs of a wrongful purge and to understand how federal law restricts  such purges.
Policy Briefs