What A Wall Street Banker Says About Our Society

In the New York Times, a former Wall Street banker begins a deep and emotional piece on wealth addiction with the following confession:

In my last year on Wall Street my bonus was $3.6 million — and I was angry because it wasn’t big enough. I was 30 years old, had no children to raise, no debts to pay, no philanthropic goal in mind. I wanted more money for exactly the same reason an alcoholic needs another drink: I was addicted.

The piece is important for numerous reasons, but what strikes me particularly is how much Polk’s story coincides with what we are feeling as a nation. Last week I wrote about new evidence that as societies develop, they eventually reach a point where increases in GDP no longer bring about corresponding gains in happiness.

As more states across the U.S. (and more countries across the world) begin adopting alternative measures they find that while GDP has been increasing, other measures of well-being have remained flat. Our national Genuine Progress Indicator, which takes into account environmental, social and distributional (inequality) has remained stalled for decades, while GDP growth has plodded forward. 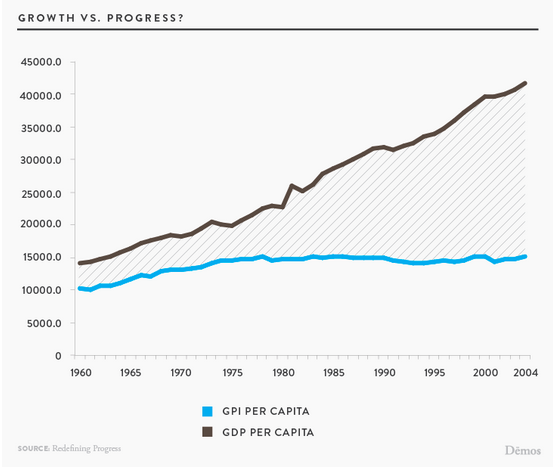 Could it be that as a society, we are addicted to growth? There are numerous indications that this is the case. For one, research finds that when asked ““What do you think will be the most serious problem facing the world in the future if nothing is done to stop it?” only 10 percent of American said, “the economy,” while 25 percent said “the environment” or “global warming.” And yet progress on climate change is constantly stalled by members of Congress warning of harm to economic growth (even though climate change will is already pummeling economies).

Regulations are constantly denounced on the spurious claim that they will “kill jobs,” even though the most comprehensive studies show that they don’t. We have ad campaigns based around the idea that you should ruin perfectly good phones and computers, even though e-waste imposes horrific costs on the environment and children in developing countries.

As E.F. Schumacher warned, “Call a thing immoral or ugly, soul-destroying or a degradation to man, a peril to the peace of the world or to the well-being of future generations: as long as you have not shown it to be ‘uneconomic’ you have not really questioned its right to exist, grow, and prosper.” Obama has opened up new drilling, pressured by groups promising “jobs” and “growth” even while we face an inflating carbon bubble.

As Oscar Wilde wrote long ago, “In a community like ours, where property confers immense distinction, social position, honour, respect, titles, and other pleasant things of the kind, man, being naturally ambitious, makes it his aim to accumulate this property, and goes on wearily and tediously accumulating it long after he has got far more than he wants, or can use, or enjoy, or perhaps even know of.” What he says of individuals can just as easily apply to societies.

This case study highlights how New Economy Project and the Public Bank NYC coalition are pressing for the creation of a public bank for New York City, as part of a broader vision for economic and racial justice.
Research
Image