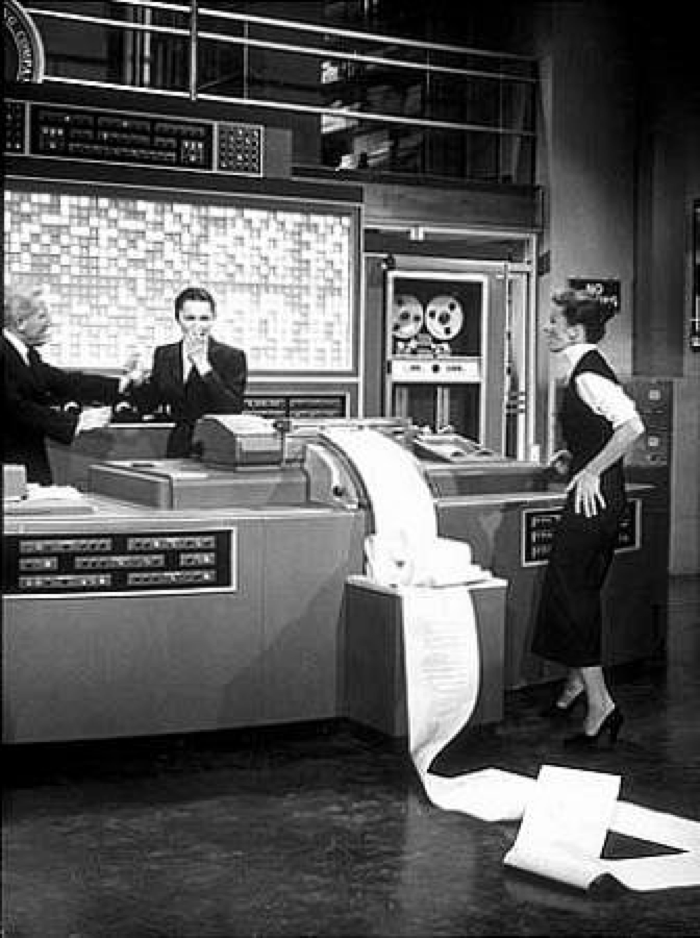 This weekend I watched Desk Set (again—I am a sucker for Katharine Hepburn’s romantic comedies).

In the movie, Bunny Watson (Katharine Hepburn) leads a team of sharp and snappy reference librarians at a television network. They answer all kinds of questions with great ease—many from memory—and demonstrate tremendous skill at getting the answers they don’t already know. The tension of the film is introduced when Richard Sumner (Spencer Tracy), the developer of a remarkable computer system, comes to install the new technology in the department. The women in the reference library—and, yes, they are all women—fear that they will be completely displaced by this newfangled machine. Sumner is likeable, good-natured, well intentioned, and completely oblivious to the fear he has inspired. The film optimistically bears out Sumner’s vision: the computer is not supposed to and, the film makes clear, cannot replace the women; it merely supplements their capacity.

I am summarizing this 60-year-old film in a blog about contemporary policy issues because we—again—are facing the question of our orientation to new technologies and labor. Some people revel in the prospect of a jobless future, while others fear it. Many more suggest that we won’t have a jobless future, but we will need to reconsider how our labor market, our systems of social provision, and our commitment to the common good will function.

I invite you to join a particularly robust conversation of this in the Forum of the Boston Review. The conversation hinges on the question of “basic income in a just society,” but grapples with issues of social provision more broadly, the shape of work, and the politics of demanding basic income and/or guaranteed jobs. The concept of basic income can refer to a wide range of proposals for unconditional cash grants that secure basic needs (by supplementing other income or by directly providing enough cash to secure food, housing, care, and other goods and services needed to subsist) for participants in society (sometimes defined as residents and other times as citizens). Underlying much of the conversation about basic income is an effort to respond to the changing structure of the economy and the labor market.

Join in the conversation.

Amazon has cashed in on the COVID economy, enjoying surging sales and a soaring stock price.
Blog
Amy Traub
Image

Back to Work or Else? Risky Reopening Policies Put Black and Brown Workers in Danger

We're all seeing systematic efforts to shift the economic and health risks of the pandemic from governments and employers and onto the backs of disproportionately Black and brown workers.
Blog
Amy Traub