We Are Better Than This

Is this really what we want America to be?

Late last Thursday night, Ai-jen Poo of the National Domestic Workers Alliance sent me an urgent text message: “We have to do something. I’ve been talking to Anna [Galland, of MoveOn]. Will you help?” The conversation continued over the weekend, adding more and more voices. We arrived at the message that could express our collective anguish: “We Are Better Than This.” It was an all hands on deck effort (my colleague Tammy’s husband even offered his ad agency’s services pro bono), and within 72 hours, we had over 700 groups willing to say loudly, “yes, we are”.

This morning, the New York Times will include a full-page ad calling on elected officials, leading public voices, and the media to “stop the spread of hate and division” as the United States faces a rising tide of Islamophobia, racism, and other hate speech—and violent attacks apparently inspired by such dangerous rhetoric. 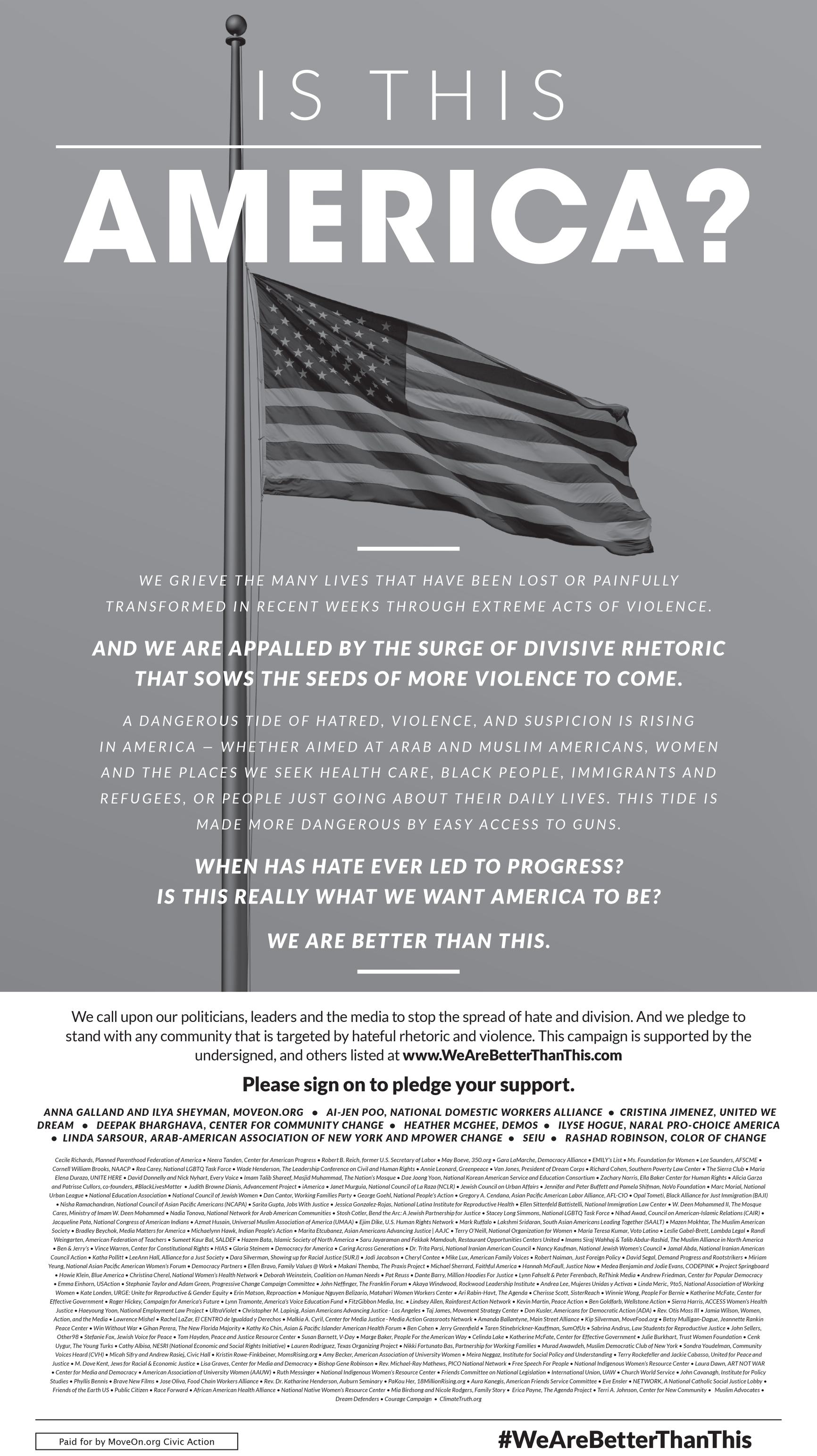 Demos is proud to have joined individuals and groups including MoveOn.org, the National Domestic Workers Alliance, United We Dream, Center for Community Change, Demos, NARAL Pro-Choice America, Arab-American Association of New York, SEIU and Color of Change, to launch a rapid-response ad campaign and associated pledge of solidarity to push back against the politics of fear-mongering. #WeAreBetterThanThis. The effort also features a website, WeAreBetterThanThis.com, where organizations and individuals can pledge to stand against hate and in defense of targeted communities.

When public figures demonize whole swaths of people for their own political gain, they are complicit in the escalation from words to deeds that follow. We’ve seen it in violent assaults on individual Muslim Americans in the aftermath of the Paris tragedy; we’ve seen it in the murderous rampage at Planned Parenthood; we’ve seen it in the Minneapolis shooting of five Black Lives Matter demonstrators and beatings of protesters at candidate rallies. The leading Republican candidate has even called to stop all Muslims from entering the United States.

We are better than this.

Now is the time for all Americans of good conscience to declare their side, and affirm that we are made strong by our diversity, and made strongest by our unity.  You can add your name to the list by visiting www.WeAreBetterThanThis.com