A common perception of the upcoming presidential election is that it will pivot on whether voters credit the recent uptick in employment as indicative of an economic turnaround, and thus support the President. Or whether they view record unemployment as a sign that a new approach to the economy is called for, even if the downward trend has been arrested.

This is consistent with academic models of presidential elections in which high unemployment at election-time, at least in the past, has predicted defeat for the party in power.

However, if one wants to look for data that inform the question whether voters are better off than they were four years ago, one should look at wages as well as employment. After all, even in this economy most people still have jobs.

The latest edition of The State of Working America, published this week by the Economic Policy Institute, focuses not on high unemployment but on a “lost decade” of wage and income growth for almost everyone except those earning the very highest incomes. 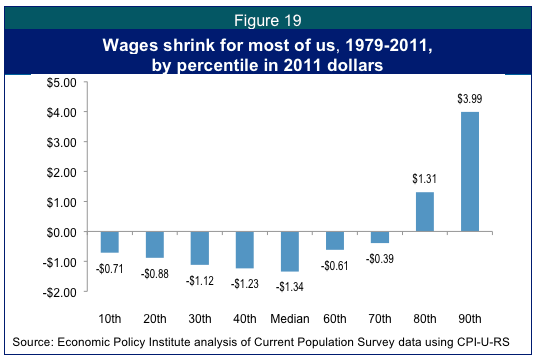 In the swing state of Ohio, President Obama makes much of the welcome fact that manufacturing jobs are coming back to the state. But the reality for Ohio workers is perhaps captured better by this description of wage trends in Ohio, from The State of Working Ohio, published at Labor Day by Policy Matters:

Wage loss over the 2000s in Ohio was among the highest in the country, second only to Michigan.

What do these observations, derived from statistics, mean for people? They mean that as children are born and expenses rise, household income is not keeping up with the rising costs of raising a family. For people seeking to start families they mean postponing having children because they don’t make enough money. In short, the majority of Americans face discouraging conditions as they contemplate their ability to provide for their families.

We need a more vigorous discussion of wage stagnation because the issue is not likely to be addressed soon. As Josh Bivins, one of the authors of The State of Working America, explained to the Washington Post, it will be very difficult to gain legislative consensus on the grab bag of potential solutions—new fiscal stimulus, aggressive fiscal policy to increase demand, raising the minimum wage, and measures to improve the fortunes of labor unions.