The Department of Labor recently moved to begin rolling back the overtime pay rule, taking a critical benefit away from millions of working people and their families. The retrenchment puts the administration squarely on the side of the U.S. Chamber of Commerce and other big-business lobbyists—rigging the economy further in service of the very interests voters already believe are unfairly profiting at their expense. It is the latest in a long series of betrayals from a candidate who vowed to stand up for ordinary working Americans.

The overtime pay rule, finalized in May 2016, is a much-needed update to the pay rate at which salaried employees must receive additional compensation for working more than 40 hours a week. The rule doubles the salary threshold (from $23,660 to $47,476 per year) under which most salaried workers are guaranteed overtime pay for working longer hours. The rule also requires that the pay level be automatically updated every 3 years to ensure that workers continue to be paid the compensation they deserve. The update was long overdue: while 62 percent of full-time workers qualified for overtime pay in 1975, according to the Department of Labor, just 7 percent were eligible for overtime in 2015. 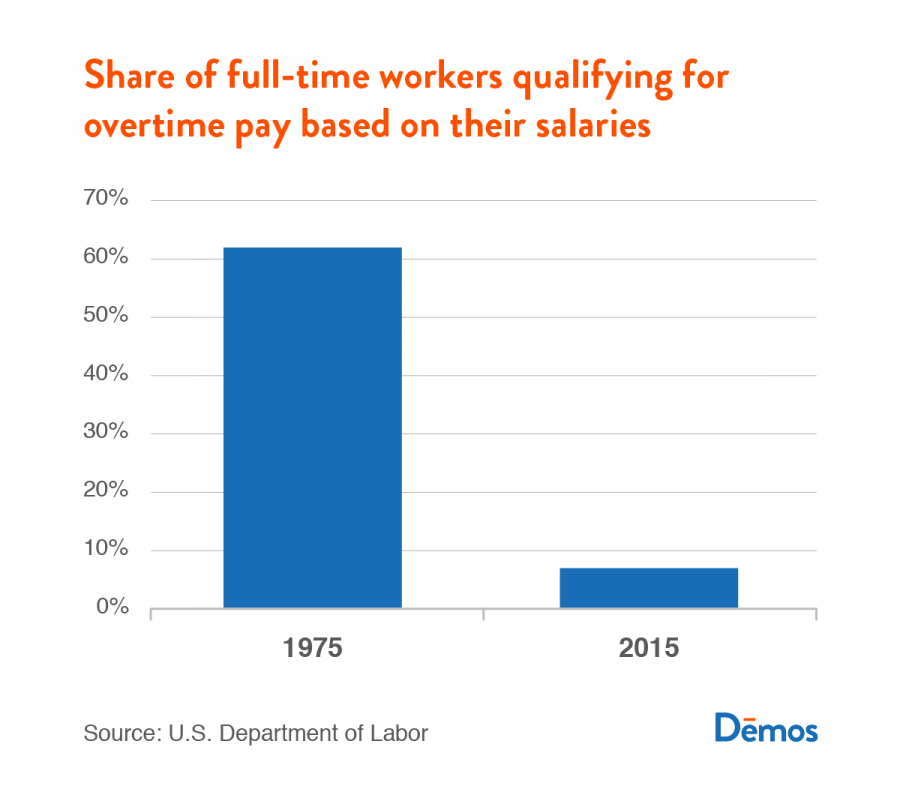 If the rule had gone into effect as intended, the new overtime rule would have begun boosting workers’ pay in December 2016. The Economic Policy Institute estimates that 12.5 million workers and their families would have benefitted. According to an analysis by the Department of Labor, the overtime rule would have resulted in an average annual increase in pay of $1.2 billion per year. Since women, people of color, and younger workers are the most likely to work in moderately-paid salaried jobs, these workers would have seen the greatest gains.

Yet the rule is not just about pay. As I explained when the overtime rule was first introduced:

One advantage of the new rule is that employers have a number of strategies to adapt, many of which also end up benefitting working people. For example, if employers don’t want to pay time-and-a-half to current employees, they’ll hire new employees to do the work: Goldman Sachs estimated the rule would create 120,000 new jobs at the same time that existing employees are no longer so overworked. Employers could also respond by raising the salaries of employees earning near the new threshold so that they’re no longer eligible for overtime. In this case, workers miss out on overtime but get a raise. Of course, employers could also cut employees’ base salary, leaving workers without extra time or money, yet in practice employers seldom reduce the pay of current workers.

In fact, as Demos President Heather McGhee noted in a video about the importance of the overtime rule, updating overtime is ultimately a “win” for employers as well, because it will help to strengthen a national economy undermined by stagnant pay.

We have seen how minimum wage increases at the state and local level have enabled the lowest-paid workers to finally see their wages begin to recover from the Great Recession. Enabling overtime pay increases to go into effect would enable many moderate- and middle-income workers to get a pay boost as well.

However, a lawsuit stopped the implementation of the overtime rule. And now the Trump administration has issued a new “request for information,” disregarding the 270,000 public comments the Department of Labor had already taken into account in formulating the rule. The administration’s request for information suggests that multiple overtime pay standards could be implemented, defeating the entire purpose of a fundamental standard that applies to all working people.

The overtime pay rule represents a very real way that our democratically-elected officials can change the rules of the game, un-rigging the economy in a way that actually benefits ordinary Americans. We should not allow Trump and his corporate lobbyist friends to strip this benefit away.

Underwriting Good Jobs: How to Place Over 20 Million Americans on a Pathway to the Middle Class Using Federal Purchasing Power

This report presents new research on the scope of federally-supported employment in the private economy and shows how, using our over 1.3 trillion dollars in federal purchasing, the President of the United States can place over twenty million Americans on a pathway to the middle class.
Research
Robert Hiltonsmith
Lew Daly