In America, chief executive pay is now 300 times more than the average worker. That’s a high enough ratio that presidential candidates are taking note on both sides of the aisle. Senator Bernie Sanders listed the statistic in a statement supporting mandated CEO disclosure of salaries, and CEO Trump himself declared that the numbers were “disgraceful.”

However, even on a topic where a democratic socialist and a real estate mogul agree, it turns out that there’s always a devil’s advocate. JPMorgan CEO Jamie Dimon proposed an interesting hypothesis on a recent Meet the Press: lowering executive pay won’t fix our nation’s staggering income inequality.

“If you took all the compensation of all the CEOs of the top 500 companies in America, it wouldn’t make a dent in the problem,” he said.

Like two ships passing each other in the night, this neatly parallels another recent CEO wage moment. In April, Dan Price of Gravity Payments announced that everyone in his 120-person company—from the lowest-paid clerk on up—would receive a minimum salary of $70,000. In part, he achieved this by cutting his own $1 million salary to $70,000.

Arguably, this made a pretty large dent in the problem for the 119 other people who work at Gravity Payments.

So, the impact of redistributing CEO salaries on the entirety of the American economy? Difficult to analyze, to say the least.

But what about the impact of redistributing CEO salaries to their employees?

I took the top ten CEO salaries in the country in 2014 and the most-recently reported number of employees in each CEO’s company. Being the head of a company is doubtless hard work and should be rewarded accordingly, so I set the CEO’s new salaries at a cool million dollars a year. I took the rest of the average $73-million-per-year earnings and divided it up among their workers. 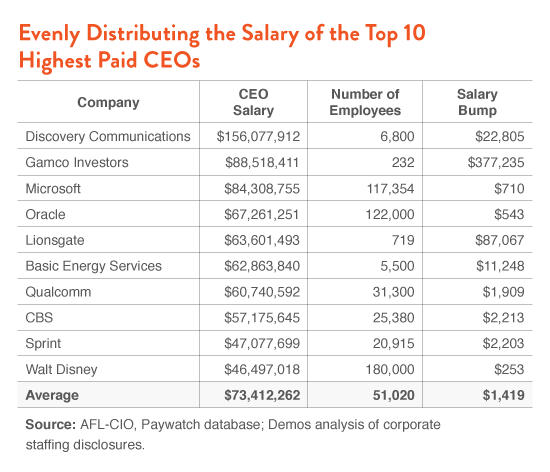 If this happened—if these CEOs only made a paltry seven figures a year—their employees would see an $1,419 increase in salary.

For context, depending on where you look, the average American makes somewhere between $28,031 and $34,823. That makes this salary bump equivalent to a 4-5% raise.

In other words, redistributing the salaries of ten men instantaneously gives half a million employees an annual raise—and a generous one, at that—in an economy that hasn’t seen a real hourly wage increase in over five years.