There’s an important scoop-y piece in the Chronicle of Higher Education today concerning the House Republicans’ budget priorities for higher education. While much of the focus is on the proposal to freeze the maximum Pell Grant and rollback some of the expansion of the program we’ve seen over the past several years (all of which I’ll get to in a minute), the Chronicle’s Kelly Field notes that there a few other goodies in the GOP’s budget proposal that could have the effect of removing some of the additional protections that, oddly, both sides of the aisle have seemed to favor in the past.

But first, Pell. There’s no scenario in which freezing Pell Grant awards (which has the effect of decreasing the award, because inflation) is a good idea. First, it’s ineffective. We know from research that need-based grant aid is the most effective financial means of getting students to and through college. Studies have found that increases in grant aid have positive impacts on college enrollment, retention, and completion. In short, if your priority is getting more students into and through the higher education system, the Pell Grant is great at doing that! If that is not your priority, you should simply say that.

Second, freezing Pell would just continue a decades-long trend of reducing its buying power. The cost of attendance at public four-year colleges has more than doubled in the past three decades, adjusting for inflation. And with state higher education budgets only slowly creeping up from the bottomed-out levels of the recession, we’re still seeing year-over-year increases in tuition that outpace inflation; in fact, the “good news” out of last year is that tuition increases were lower than the the average of the past 5, 10, and 30 years—but they still outpaced inflation!

Meanwhile, the Pell Grant—part of which is at least pegged to inflation until 2018—has been falling behind as a percentage of what students must pay once they’re on campus. Freezing the award would just exacerbate the problem. Here, from the College Board's Trends in Student Aid Series (2001 and 2014), is what we're looking at today: 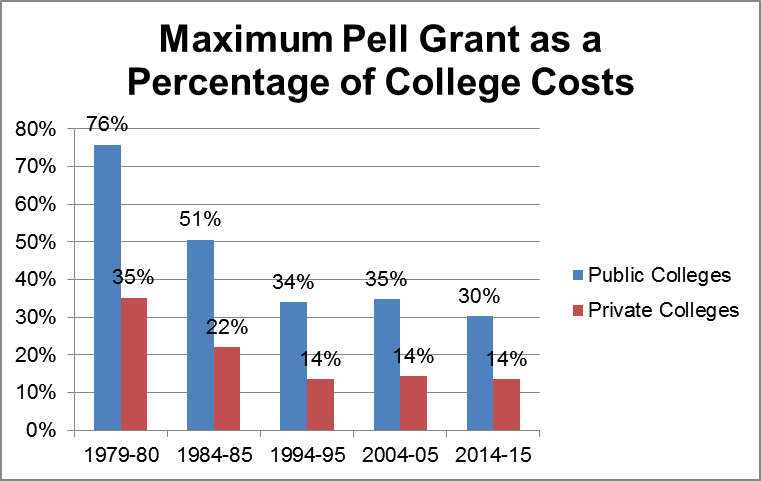 Obviously, part of the equation has to be to reduce the upfront cost of college. That’s why I was pleased yesterday to see the Congressional Progressive Caucus—as well as efforts last year by the now-retired Sen. Harkin—to try and kickstart state funding of higher education, so that Pell isn’t fighting a futile battle. But there’s nothing in the House GOP’s plan that would try and attack the root problem—not even a vague nod to the power of the private sector. It simply slashes grant aid, full stop.

As for the other nuggets, the GOP’s budget would repeal Public Service Loan Forgiveness for new borrowers, a program signed into law by President Bush in 2007. It’s not particularly surprising that the Congressional GOP wouldn’t be enamored with the idea of Public Service Loan Forgiveness—I mean, the name of the program contains three words “public,” “service,” and “forgiveness” that make it just feel like a liberal dream. And I’ve argued before that PSLF is ripe for some small tweaks—right now, you only receive a benefit (debt forgiveness) if you work in public service for 10 years, while there might be value in making it so undergraduate borrowers can still see a benefit after spending, say, 5 years in a public service job. But repealing the program itself is a pretty startling reversal from a bi-partisan piece of legislation passed less than a decade ago.

Finally, the budget would get rid of the Obama Administration’s Pay As You Earn program, which caps monthly loan payments at 10% of an enrolled borrower’s income, and provides forgiveness after 20 years. Ostensibly, we’d revert to a system where monthly payments are capped at 15% of income—but as TICAS pointed out in a statement, that ends up being a pretty sizeable difference for some borrowers—around $70 additional dollars in loan payments a month for a graduate with average levels of debt making $35,000 annually.

And after all of that, we’re looking at budgetary savings that average $6.1 billion a year over the next decade. In other words, this isn’t a reaction to some bloated government program—and in the case of Pell, it’s certainly not a reaction to an ineffective one. Like all budgets, it’s a political statement, and a pretty blunt one at that.