The story of this past election, and really the past several elections, is one of how much money floods our electoral system. The 2012, post-Citizen’s United election was the most expensive election in history and even though 2013 was an off-year election cycle, there was no shortage of spending.

In Washington State, voters saw an influx of over $30 million spent on a ballot initiative to require labeling of Genetically Modified Organisms (GMOs). The majority of that money came from out of state donors. Opponents of the initiative spent $22 million, of which only $550 came from individuals and companies based in the state. There are no additional zeros at the end of that number—exactly $550 came from within the state. Of the $8.4 million spent in favor of the initiative, $5.8 million came from out of state.

In New York City, Airbnb and Uber are uncertain how the new mayor will address their business model so they did the logical thing—donated to his campaign. Airbnb and Uber have a lot of money to lose if the city decides to crack down on their approaches to the sharing economy. So, all three founders of Airbnb, as well as some of their investors, gave the maximum possible donation to Bill deBlasio. Thankfully, the contribution limits for city officials are fairly low, which helps prevent these companies from having an outsized voice.

It’s clear that special interest spending isn’t restricted just to the federal level. Investments are being made on the state and local level, as well. Mother Jones put together a map that shows what industries dominate each state based on state-level campaign spending in 2012, excluding spending on ballot initiatives and party PACs. 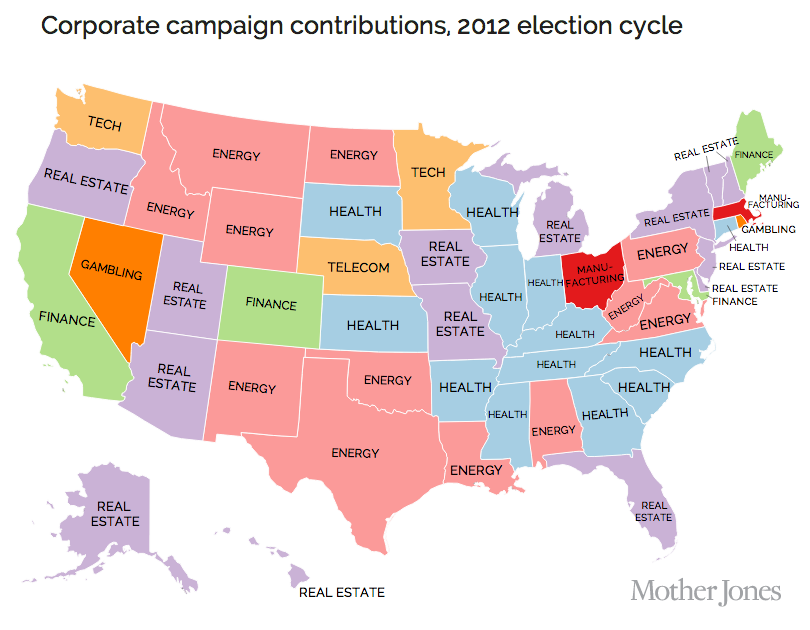 The reality is that political spending more than dominates our electoral system on the state and federal level—it has completely engulfed it. And, if you can believe it, things could get even worse if the Supreme Court strikes down aggregate contribution limits. At what point do we say enough is enough? What kind of democracy will we have when electoral spending, and in turn policy outcomes, become dominated not just by industries but by a handful of individuals?