Former Governor Eliot Spitzer announced his run for NYC Comptroller yesterday and this morning on the Brian Lehrer show, he attacked his opponent, Scott Stringer, for opting into public financing. Spitzer said, “He (Stringer)’ll be spending your money, I’ll be spending my own.” This characteristic of public financing is misleading and wrong. In fact, public financing is one of the only tools constituents have to combat the corrosive influence of money in our electoral system.

New York City’s public financing system has successfully diversified the donor base and has brought in more donors of color and more small donors. As the graph below shows, the average contribution for candidates participating in public financing is a fraction of non-participating candidates. Diversifying the donor base brings more voices into electoral politics and can start to reverse the dominance of affluent interests and priorities. 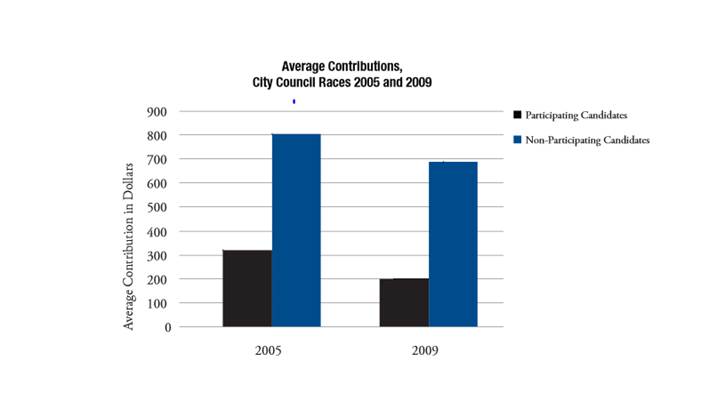 In the latest Atlantic survey on American values, nearly 60 percent of respondents across the ideological spectrum said money in politics was the reason the country was so divided. The reason money in politics is such a problem is that the values of those that are able to participate, the affluent and corporate interests, dominate policy priorities. The survey found that 62 percent of Democrats, 70 percent of Independents, and 48 percent of Republicans believe that elected officials reflect the values of the wealthy. Considering the wealthy make up a small minority of our population, policies are being passed that help the very few and leave the vast majority behind.

Finally, Spitzer’s claim that he will be spending his own money shows just how corrupting money can be in the electoral process. It means only those that can afford to spend millions can run for office. Candidates that can self-finance their elections do not engage in the same struggle as working and middle class families.

In our current system, millions of taxpayer dollars are given away in tax breaks and incentives that only help affluent and corporate interests. We can either pay a smaller cost for an electoral system with integrity or a much larger cost for tax breaks for the wealthy. Public financing is the fundamental first step to getting money out of the system and bringing voters in. In this area, Spitzer is dead wrong.