Should We Fear the Robots?

A spectre haunts us, the spectre of robots. The Economist writes, “it seems likely that this wave of technological disruption to the job market has only just started. From driverless cars to clever household gadgets, innovations that already exist could destroy swathes of jobs that have hitherto been untouched.”

A recent study from the University of Oxford finds that 47% of U.S. jobs could be replaced by computerization (see chart). The study includes a handy table at the bottom where you can see the probability of your job being computerized (most likely to be affected: telemarketing, least likely: recreational therapy). As Tyler Cowen writes in Average is Over, “as intelligent-analysis machines become more powerful and more commonplace, the most obvious and direct beneficiaries will be the humans who are adept at working with computers and with related devices for communications and information processing.” This, he argues will drive inequality. 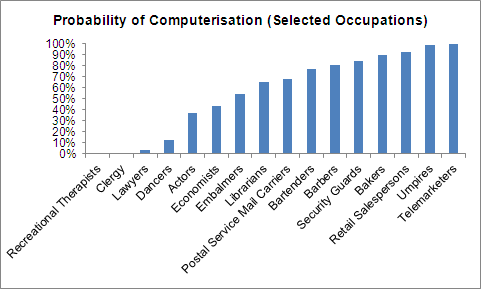 It’s certainly true that innovation has driven inequality, but it is more complicated than Cowen makes it out to be. Technology has always been disruptive, but how the gains are distributed is the real issue. Oscar Wilde wrote in 1891,

Up to the present, man has been, to a certain extent, the slave of machinery, and there is something tragic in the fact that as soon as man had invented a machine to do his work he began to starve. This, however, is, of course, the result of our property system and our system of competition. One man owns a machine which does the work of five hundred men. Five hundred men are, in consequence, thrown out of employment, and, having no work to do, become hungry and take to thieving. The one man secures the produce of the machine and keeps it, and has five hundred times as much as he should have, and probably, which is of much more importance, a great deal more than he really wants.

His analysis is surprisingly relevant today. The benefits of technology and globalization have been distributed differently in different societies. In countries with strong bonds of social democracy, the benefits have been more widely distributed through a government transfer system.

The conventional wisdom is that skill-biased technological change is driving inequality. The premise is that technological developments have favored college-educated workers over unskilled labor, thereby increasing inequality. Since it was formulated, SBTC has drawn criticism. A 2002 paper by David Card first drew attention to potential holes in the explanation: a short period of stabilization in wage inequality in the 1990s during a technological boom and the failure to explain wage gaps between men and women as well as blacks and whites. A 2012 paper by Daron Acemoglu and David Autor noted other failures in the theory, namely that it could not explain the divergence in incomes that had occurred among skilled workers and why the real median wages could decline during a period of increasing productivity.

New research Larry Mishel, Heidi Shierholz and John Schmitt further vitiates the thesis. Mishel et al. argue that “job polarization,” the premise that more jobs have been created in low-wage sectors and high-wage sectors, thus driving wage inequality, doesn’t actually explain the problem. On the one hand, high-wage occupations have not significantly expanded their share of the workforce since 2000. On the other, low-wage jobs have not increased as a total share of employment since 1979.

They find that changes in the occupation structure do not affect the wage structure, so if technology causes a shift from manufacturing to retail, this doesn’t necessarily entail a shift in the wage structure. They find that inequality is increasing within occupations, not between occupations as the SBTC narrative would predict. The SBTC narrative relies on the idea of an “education premium,” i.e., people with higher education reap the benefits of technological progress. But Mishel et al. find that wage inequality has grown strongly since the mid-1990s while the education wage premium grew little. Wages for college graduates have flattened over the last 10 years, even among science, technology, engineering and mathematics (STEM) and business occupations. He and his colleagues point instead to political choices, not economic inevitability.

In the show Always Sunny In Philadelphia, Charlie Kelly is one of the owners of a bar, but has lost a large portion of his share through Esau-esque trades. Because he no longer owns as much of the bar, he is forced to do the bad jobs around the bar, which become known as “Charlie work.” Charlie is subject to bouts of unemployment and degrading labor. He is trapped in a Catch-22; he would happily give up “Charlie work” in favor of machines, but because he lacks a stake in the bar, it would only leave him unemployed. This is the plight of many Americans, because America has not developed social democracy. John Schmitt of the Center for Economic and Policy Research told me that countries with strong social safety nets view globalization more positively than countries without. That’s because the gains from trade are distributed more equally, so everyone benefits. In America, since the 1970s, these gains have accrued more and more to the richest Americans, while hourly compensation for non-supervisory workers has remains stagnant (see chart). 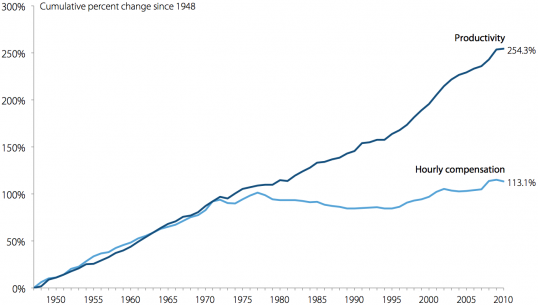 And as I have mentioned the word labour, I cannot help saying that a great deal of nonsense is being written and talked nowadays about the dignity of manual labour. There is nothing necessarily dignified about manual labour at all, and most of it is absolutely degrading. It is mentally and morally injurious to man to do anything in which he does not find pleasure, and many forms of labour are quite pleasureless activities, and should be regarded as such. To sweep a slushy crossing for eight hours, on a day when the east wind is blowing is a disgusting occupation. To sweep it with mental, moral, or physical dignity seems to me to be impossible. To sweep it with joy would be appalling. Man is made for something better than disturbing dirt. All work of that kind should be done by a machine.

In the near future, such work will be done by robots, a welcome development. The question is how we distribute these gains. Since the 1970s, we’ve allowed most of them to accrue to the top 1%. That is not practical, nor was it inevitable. We need the productivity growth that comes from machines to be distributed equitably, so that everyone benefits.