The establishment consensus is accurately summarized by Martin Feldstein, “Preventing an explosion of the national debt requires slowing the growth of the benefits of middle-class retirees.” But the truth is that the middle class and poor need more help than ever.

David Callahan has written here at Policyshop that cutting Social Security is the wrong culprit in the deficit debate and how this program is more important than ever with over 4 million seniors living in poverty. Similarly, Duncan Black argues in USA Today that, “The majority of people nearing retirement will not have sufficient funds to retire with anything resembling economic security and comfort.”

There has been a disturbing spike in poverty among the elderly, reports the Philadelphia Inquirer,

Poverty among the elderly is growing. And deep or extreme poverty - defined by the government as a single person earning $5,700 a year or less - has taken a jump that even experts find astonishing.

For men over age 65 nationwide, the rate of deep poverty increased 23 percent between 2011 and 2012, according to analysis by the National Women's Law Center, a nonprofit advocacy group. For women, it went up 18 percent. Overall, that means a total of 442,000 elderly men and 733,000 elderly women were living in deep poverty in America in 2012, the center's figures show.

A report by the New America Foundation, co-written by Demos analyst Robert Hiltonsmith, finds that,

This consensus [that Social Security must be cut] is not only misconceived in its diagnosis but also mistaken in its prescriptions and potentially disastrous in its consequences. Retirement security is often thought of as three-legged ‘stool’ consisting of Social Security, employer retirement plans, and private savings. Social Security has been far more stable and successful than the other two legs of the stool. The reliance on these other legs of the system has resulted in a retirement security crisis for most Americans, shifting costs and risks onto individuals, even as the benefits of these programs go overwhelmingly to upper-income earners.

Concerns about the inadequacy of Social Security are finally reaching the public discussion. Sen. Tom Harkin has introduced a bill that would use a new inflation measure to calculate Social Security benefits. The new measure (called the CPI-E) would more accurately take into account the fact that seniors spend more money on medical goods.

Sen. Sherrod Brown is joining Harkin’s fight to increase Social Security benefits: “Senator Sherrod Brown is joining the push to expand Social Security, and he’s making a startling argument: Dems should go on offense on entitlements, rather than let Republicans and Beltway fiscal scolds frame the discussion as one over how much benefits should be cut, not one over whether they should be cut at all.” He wants Democrats to go on the offensive, fighting for seniors who are finding out that their pensions are weaker than they thought.

He is joined by Bernie Sanders, who is on the budget conference committee working to eliminate the sequestration. Sanders writes in USA Today, “We must not cut Social Security, Medicare or Medicaid… Let's be clear: Social Security is not an entitlement program. It is an earned income benefit that has been enormously successful in cutting the rate of senior poverty.”

Although the push-back against the “Very Serious People,” is welcome, it may appear surprising that it took so long to mobilize politicians in support of such a popular program. The political explanation for the backwards debate about Social Security is simple. Wealthy citizens have entirely divergent opinions for the average citizen and Congress is far more likely to listen to the former than the latter.  Larry Bartels, Benjamin Page and write in a 2013 paper on inequality and political preferences, “There was also a tendency for the wealthiest respondents to tilt even more than the less wealthy toward cutting back Social Security speciﬁcally.” Even while the Washington establishment discuss cutting social security, 75 percent of Americans favor discussing increasing benefits. 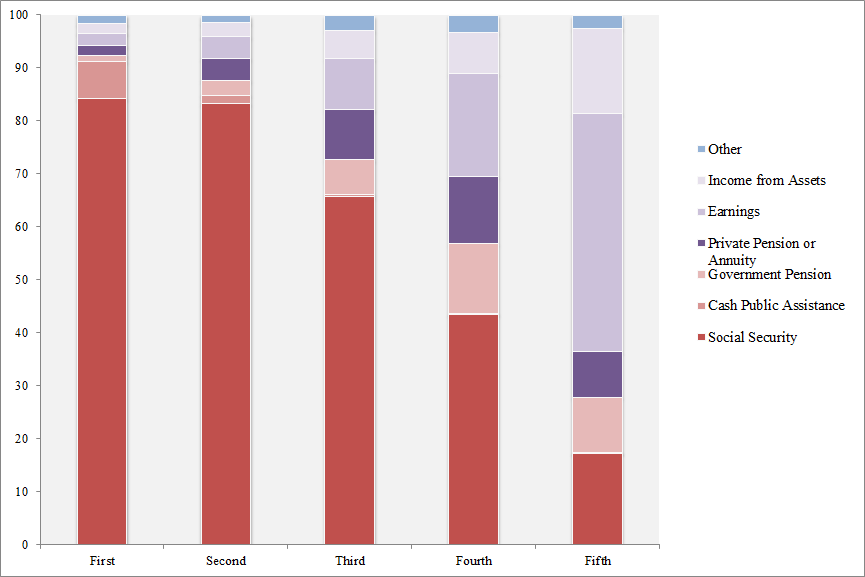 As Brown explains in The Washington Post, “ ‘The Serious People — with a capital S and a capital P — all have really good pensions and good health care and good salaries...Raise the cap. There are ways we can bring a lot of money into Social Security. Some Democrats are a bit cowed by the Serious People.’ ”

At the same time, new research finds that Social Security is failing minorities in redistributing wealth from high earners to low earners. Stuerele, Carasso and Cohen concluded in 2004 that “less educated, lower-income, and nonwhite groups benefit little or not at all from redistribution in the old age and survivors insurance (OASI) part of Social Security.” This can be partially explained by the fact that poor people and minorities often lack health insurance and suffer bouts of unemployment that decreases their benefits.

Although a complete overhaul of the system, like the one proposed by the New America Foundation/Demos study, would be ideal, minor reforms are more likely to be political successful. One possible reform is to raise the cap on the Social Security tax. This would require wealthy individuals to pay more into the system. The system could also develop a more progressive benefit scheme, increasing benefits for those with low lifetime earnings unlikely to have a private pension.