Last week, my colleague Joe Hines analyzed how impossible it was to live on the budget McDonald’s outlined for its employees. Among many issues, McDonald’s budget assumed each employee had a second job to help ends meet. Given the low-wages and wage theft prevalent throughout the industry, it’s a wonder that McDonald’s didn’t assume that its workers needed a third job just to make ends meet.

We should care about the wages that McDonald’s and other fast food chains pay because food service is one of the industries with the largest predicted job growth in coming years. Wages and potential career paths in this industry will impact millions of workers. So, what kind of career is offered within the fast food industry?

According to new data from the National Employment Law Project, occupational mobility within the industry is extremely limited. As the chart below shows, while managerial, professional and technical occupations make up 31.1 percent of jobs throughout the economy, they make up only 2.2. percent of jobs in the fast food industry. The vast majority of jobs, in the fast food industry are front-line occupations, i.e. cashier, cook, or crew, with a median hourly wage of $8.94. 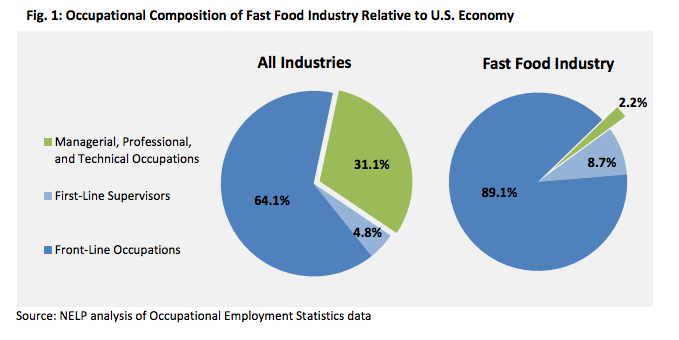 The NELP report also finds that despite what major fast food restaurants claim, opening a franchise is next to impossible, especially for workers that enter through front-line occupations. Franchise owners constitute only 1 percent of jobs in the fast food industry and 9 of the 11 largest fast food chains in the U.S. require franchisee applicants to have a net worth of at least $500,000 with at least $250,000 in liquid assets. Good luck accumulating that kind of money when you make $8.94 an hour.

With little to no career ladder available, the least the fast food industry could do is pay its workers a decent wage—perhaps one high enough that employees wouldn’t have to take a second job just to make ends meet. As we’ve highlighted before, many of these employers can well afford to do so. As my colleague, David Callahan, pointed out:

Yum! Brands, for example, paid its CEO, David Novak, $55 million last year and piled up $1.4 billion in net income. It can more than afford to give raises to its workers at Taco Bell and KFC, many of whom make $7.25 an hour.

As President Obama stated in his economic speech yesterday, livable wages are good for the economy and good for the country. Given its rapid growth, the fast food industry needs to start paying livable wages for the health of our economy.