In our recent research exploring the impacts of Oregon’s new Automatic Voter Registration (AVR) system in the 2016 election, we find that new voters who registered using AVR were more diverse than non-AVR voters. We also find that the individuals who were registered with AVR (including both individuals who voted in 2016 and those who did not) were more diverse than the non-AVR electorate. Here, we will expand our analysis and address some questions regarding our new data brief and the accompanying essay inThe Nation.

Automatic Voter Registration is a reform in which eligible but unregistered voters found through the state’s Department of Motor Vehicles databases are notified by mail that they will be added to the voter rolls unless they decline registration. In other words, AVR means that governments, not individuals, bear most of the responsibility for ensuring that eligible citizens are registered to vote, based on information already being collected by designated state agencies. With this approach, unnecessarily restrictive or challenging registration requirements that keep many individuals away from the polls are removed. As a result, our democracy can be more inclusive and electoral participation can grow.

One online commenter suggested that the root cause of the increased diversity of AVR registrants was that AVR was registering younger individuals, who were also more diverse. Our analysis revealed that, in fact, AVR increased diversity in Oregon’s electorate across age groups. To show this, we calculated the diversity across each age cohort to compare non-AVR voters, new AVR voters and new AVR registrants. As the chart below shows, in all age cohorts, the non-AVR electorate was the whitest; indeed, the difference between AVR and non-AVR voters was actually the smallest among the youngest cohort. The diversity gains from AVR did not come solely from increased registration among young people. 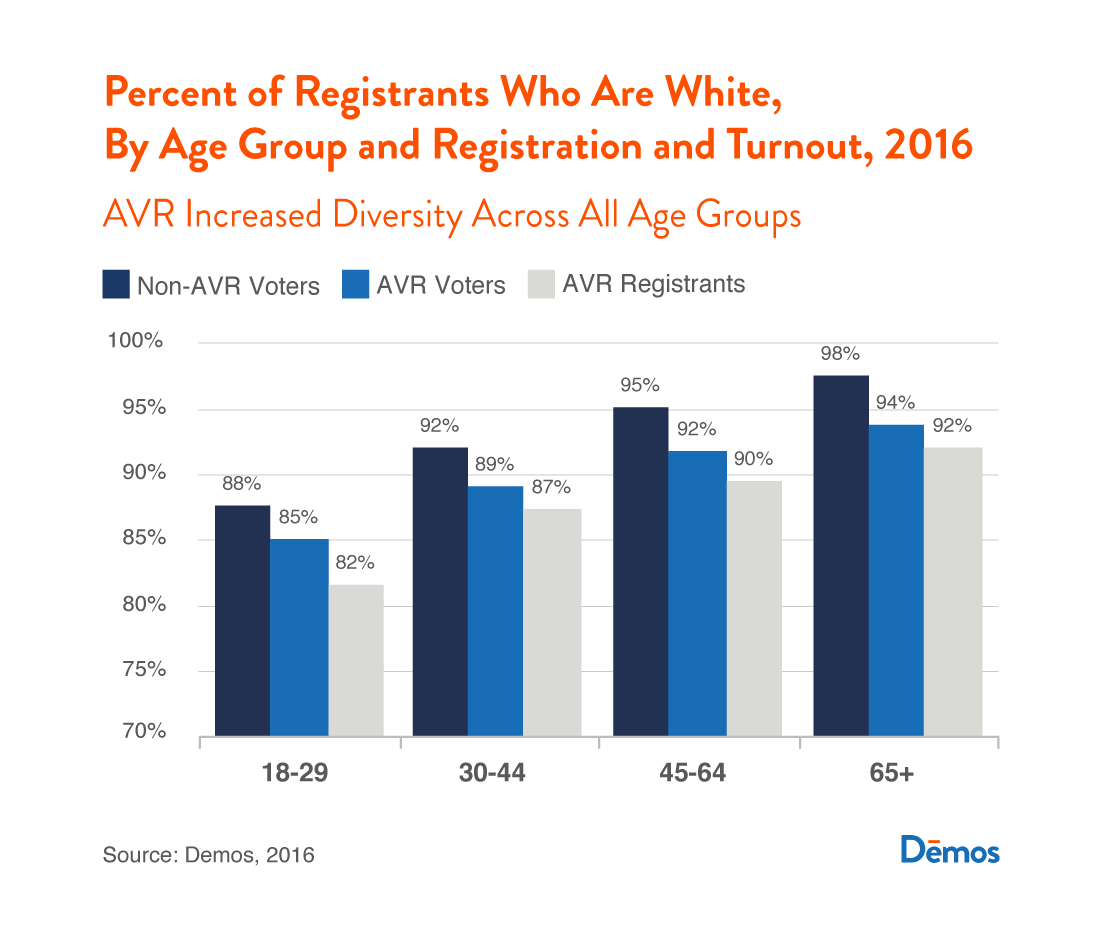 AVR brought in new voters who would not have registered otherwise.

Some have wondered whether individuals registered with AVR would have registered and voted anyway. We have good reasons to believe most would not have. For one, the majority of individuals (68 percent) who voted with AVR were registered passively—they did not actively return their notice-of-registration form. Second, the majority of first-time AVR voters (75 percent) were 25 or older, meaning they had had previous opportunities to vote in a presidential and midterm election and had not done so (other research examining this question comes away with a similar conclusion). Third, we examined registration in 2012 and find that registration in 2016 over the same period (one year before the election) was higher. A similar analysis by Eric McGhee and Paul Gronke finds that registration in 2016 outpaced earlier years. We are confident that our estimate of a 2-3 point increase in turnout is not being driven by individuals who would have registered otherwise.

Oregon is unique in many important ways, and more research is needed.

It’s possible, as some have proposed, that Oregon’s system of vote-by-mail (VBM) increases the efficacy of automatic voter registration, since passively registered voters will have their ballot mailed to them, easing their ability to vote. This, it has been suggested, may make Oregon’s AVR program more effective than we might expect to see in other states, where passively registered voters may not be aware of their registration and would still have to go to a polling location to vote.

However, there are other factors that push the other way. For instance, Oregon already has a high registration and turnout rate, meaning that there was less space for improvement, and AVR might have an even bigger impact in a low-registration state. In addition, Oregon was not a particularly competitive state on the presidential level and did not have a Senate election in 2016. The state therefore was not aggressively mobilized for voting, and AVR could have a bigger impact in states that were more aggressively canvassed and mobilized. Finally, Oregon requires a return stamp for mail-in ballots, something that many households may not have on hand, possibly depressing turnout. In addition, VBM existed prior to AVR, and there is some skepticism among academics that it increases turnout, though there could be synergistic effects when AVR and VBM are combined. However, we do not deny that there is a possibility that universal voting by mail improved the turnout of AVR registrants. We won’t know how much impact mail-in voting may have had until more states without VBM (the vast majority) have elections where AVR is in place. We look forward to studying AVR as it is implemented in more states, ideally with additional source agencies (other than the Departments of Motor Vehicles). The evidence from Oregon is certainly promising enough to point advocates in other states toward AVR as, potentially, a very significant reform for inclusion and participation in our democracy.