Yesterday, President Obama said, in a speech at the City Club of Cleveland, “In Australia, and some other countries, there's mandatory voting. It would be transformative if everybody voted." Obama is right to point to voting as a mechanism to fight elite domination of politics.

The fight against payday lending has been most successful when it gets out of the legislature and is placed on the ballot box. There is strong evidence that bolstering voter turnout would lead to more progressive outcomes.

On many issues, particularly those related to class, nonvoters are more liberal than voters. 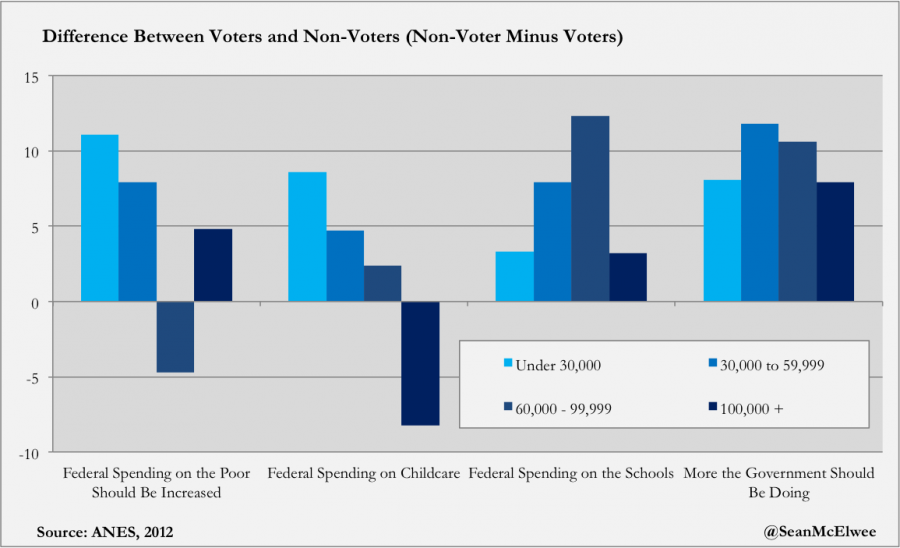 The ANES shows that across income groups non-voters are more liberal than voters. Two different studies find that states with higher class bias in turnout also have greater income inequality. Other academics have shown that class bias in turnout can explain tax regressivity, social spending and minimum wages across the states.

Internationally, research shows a similar trend. A recent study by Vincent Mahler, David Jesuit and Piotr Paradowksi studied 14 countries and found that higher turnout among the poor increased redistribution. Henning Finseraas calculated the class bias and “anti-redistribution bias” of 13 countries and found that the U.S. was the highest on both measures. (A higher class bias indicates higher voting levels among high-income voters, while a higher anti-redistribution bias indicates that those who vote are more opposed to redistribution than those who don’t.) 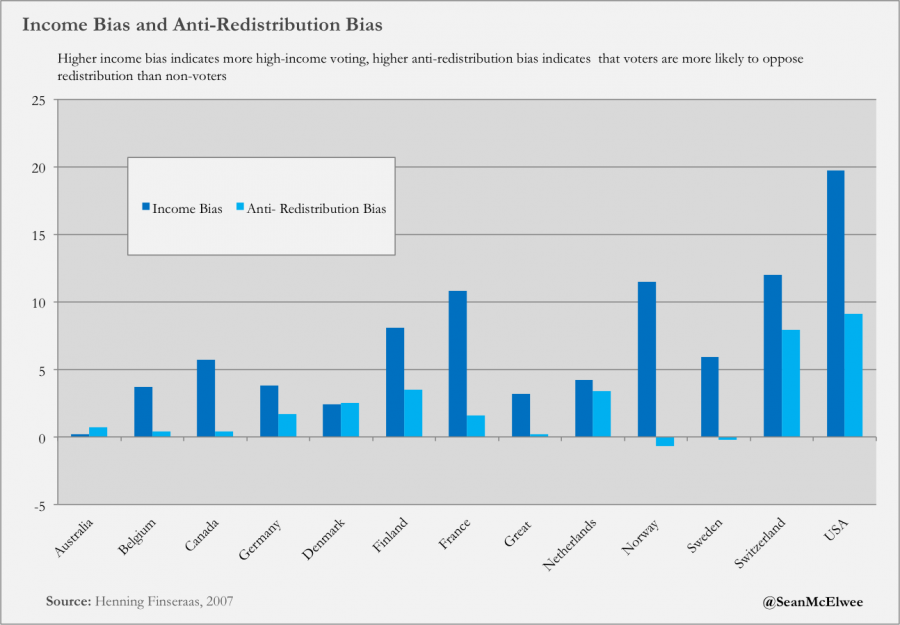 In Australia, the implementation of mandatory voting boosted the seat share for the Labor party and the share of spending on pensions. A study of Swedish elections finds that higher voter turnout leads to more public expenditures. A study of the Venezuelan election system finds that when the country abolished compulsory voting it lead to rising income inequality.

Another way that Obama could foster more liberal policymaking would be to strengthen unions. As I’ve noted the American Prospect, unions not only boost turnout, but are more successful in slowing the rise of inequality than left-leaning parties. It’s possible that people who are politically active might join unions.

Daniel Stegmueller and Michael Becher find that even after controlling for factors that might lead someone to vote, joining a union will increase an individual’s chance of voting by ten percentage points. Using international data, as well as research at the state level, Patricia Davis, and Benjamin Radcliff show that by increasing turnout and organizing workers, unions hold liberal parties accountable to the working class.

So Obama is correct: compulsory voting would indeed dramatically change the country. It would push policy in a progressive direction and force both parties to put more emphasis on policies that benefit the working and middle classes.