NVRA: Getting Out the Underrepresented Vote

Youjin B. Kim
Lisa J. Danetz
Hundreds of non-partisan organizations came together for National Voter Registration Day to ensure that hundreds of thousands of Americans will be able to exercise their freedom to vote and make their voices heard this upcoming November.
Voting Rights & Access

Many of us have experienced the Motor Voter Law when we have visited a motor vehicles department and have registered to vote or updated our voter registration information. Less well known is that public assistance agencies also are required to offer voter registration services.

Unfortunately, over the first ten years after the law was implemented in 1995, the public agency voter registration obligations fell off the radar screen. That turned around after a coalition of non-profits, including Demos, began working with state officials to fix the problems.

Just about a year ago, the one millionth eligible American was able to register to vote at a public assistance agency as a result of these efforts in five key states where Demos has been involved – Ohio, Missouri, North Carolina, Virginia, and Illinois. Since then, New Mexico, Indiana and Mississippi have joined the ranks. The collective effort has resulted in over 1.5 million more Americans who will be able to cast a ballot in this important election year. 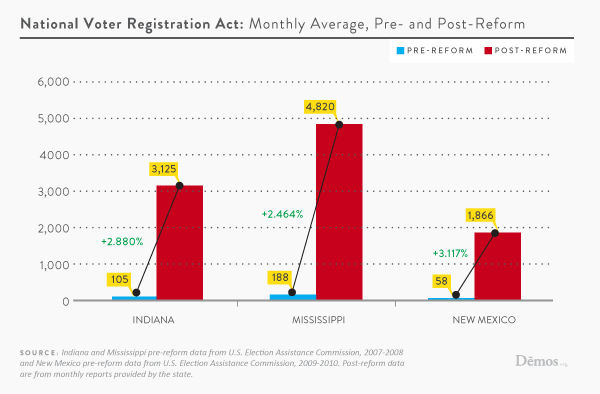 Mississippi particularly deserves a huge shout-out. After implementing all suggestions for improvements in voter registration procedures undertaken by public assistance agencies, there has been a nearly 2,500 percent increase in the number of voter registrations per month. Mississippi’s improved performance ranks it among the highest of the states that have gone through a re-implementation effort – and it has done so without any legal battle.

The success of public agency voter registration efforts around the country continues to demonstrate that public agency registration, under the NVRA, remains an important and necessary ingredient to allow Americans from all walks of life to have a free vote and a voice in our democracy. American families continue to struggle from the economic downturn and it is crucial that the needs and interests of low-income Americans are fully represented in the decisions that impact their lives and community, especially when registration and turnout rates among low-income Americans remain far behind their more affluent counterparts.

Despite all the barriers, our communities showed up for democracy. Here is what must come next.
Blog
K. Sabeel Rahman
Image

Ensuring All Votes Are Counted May Take Time

This year, as we attempt to keep our loved ones safe during a deadly pandemic, more people in our communities will be voting by mail (absentee) than ever before. Counting those votes will take time.
Policy Briefs