No, Martha Raddatz, Social Security Is Not "Going Broke" 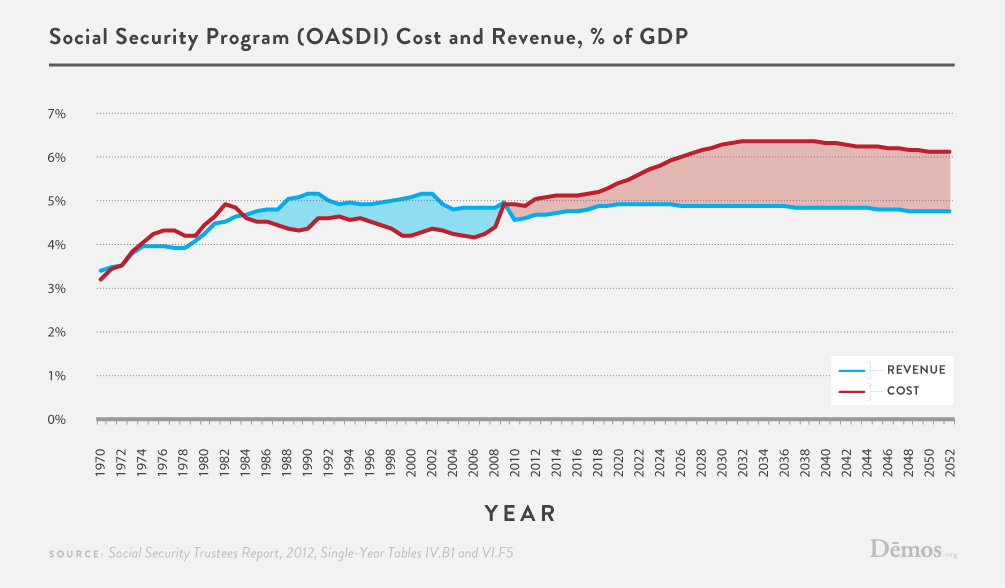 Martha Raddatz was deservedly praised as a moderator at the vice-presidential debate in Kentucky last night. But, reading the transcript again, maybe that praise was a bit overdone. Raddatz may not have been another empty seat, but her question on Social Security perpetuated a frequent myth.

Raddatz: Let’s talk about Medicare and entitlements. Both Medicare and Social Security are going broke and taking a larger share of the budget in the process. Will benefits for Americans under these programs have to change for the program to survive?

Ryan: Absolutely. Medicare and Social Security are going bankrupt. These are indisputable facts.

I dispute those facts. Raddatz and Ryan not only err in seeing Social Security as endangered, they’re backwards. The program is in excellent health. Saying it's going broke is dangerously misleading and alarmist.

In Forbes, John Harvey examines the root of the myth. It lies in the concept of a trust fund. Conservatives frequently argue the ‘trust fund’ will soon go ‘bankrupt.’ But this is predicated upon a misunderstanding of how the system operates. Harvey argues that, as Social Security is already a redistributionary program, setting aside money for it is unnecessary.

Have the money come straight out of your paycheck and right into your grandmother’s bank account. This accomplishes the goal neatly and directly–and it’s exactly what we do in real life. This is how Social Security actually operates. As you can see, this needs no prior financing or savings, nor would that appear to be particularly helpful. At the national level, maintaining a class of retirees (whether via Social Security or private pensions) means redistributing existing output, not putting money under your mattress. Although you can run out of money for retirement, we, as a nation, cannot.

The trust fund is an accounting gimmick. Its solvency says very little about the state of Social Security. Legally, Social Security is barred from increasing the deficit. Through the early 2000s it earned a profit, at which point politicians gladly squandered the surplus. So when lawmakers argue it's going bankrupt now, they really mean that it'll be modestly over-budget in the next decade. Oh no!

In reality, Social Security's long-term problems are mild. The US is getting older, so the redistribution will increase, but it’s hard to imagine a program in better fiscal health. The Center on Budget Priorities crunches the numbers based on the 2012 Trustees Report:

This isn't new. Throughout its history, Social Security has been tweaked and adjusted to prevent it from increasing the budget deficit. Try naming another spending program with a projected 75 years of near-solvency. The vast, looming crisis Ryan references? It could be paid for with a mild tax increase on the wealthy, delaying the crisis another century.

Pushing back on this framing is important. Social Security kept 20 million elderly Americans from falling into poverty during the recession. The more the media and politicians stir up fear of imminent bankrupty, the more Americans favor drastic and unfair cuts for future workers. Social Security is our most sustainable social program. Undermining it with overblown fears of insolvency is irresponsible.