It’s early, but arguably the most important paper of the year has already been released. The author, Michael Jay Barber, finds persuasive evidence that those who donate more than $200 (.22% of the population in 2014), wield more influence over our political system than anyone else.

Demos has explored this issue extensively, arguing that the rise of money in politics has hampered both racial justice and economic mobility. However, the new evidence makes our case even stronger, and more important than ever.

Barber mailed out 20,500 letters to people who donated to Senate campaigns in 2012 and then analyzed how similar the positions taken by politicians were to donor and  non-donors in the state. He notes that politicians almost perfectly align with the views of donors, align strongly with the preferences of those who are from the same party and voted for them, less well with those who voted for them and not at all with their constituents (see chart). 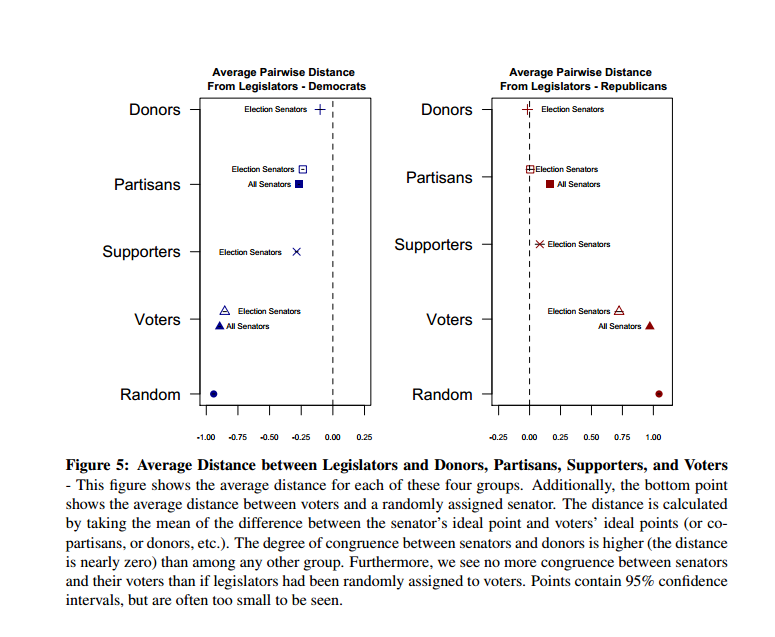 But the paper contains another disturbing fact: donors are polarizing our politics.

As I’ve noted before, polarization is an important driver of inequality, and the polarization is largely driven by elite control of the political system. Barber’s evidence supports this argument: he finds that donors are far more extreme than voters in general and supporters of the candidates (see chart). 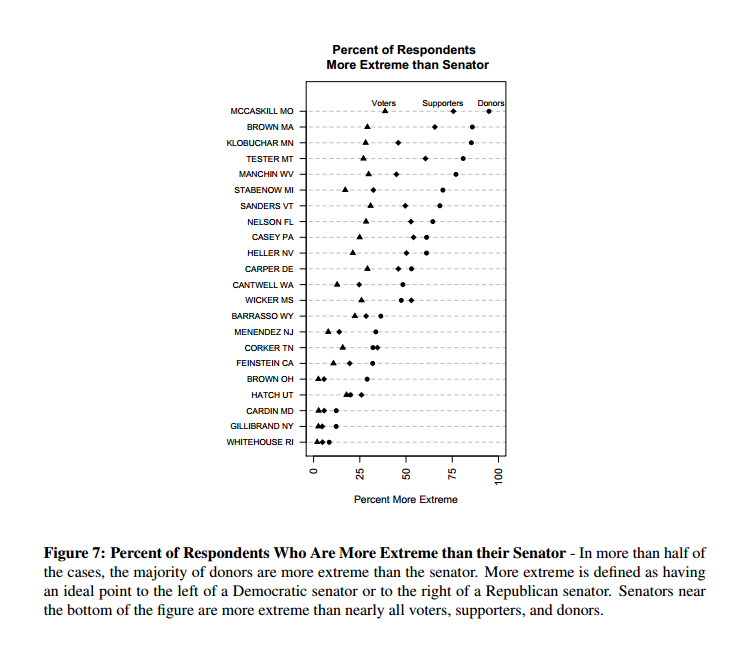 He observes that while about 60% of Republican voters dislike the Affordable Care Act, opposition is nearly unanimous among donors. It is donors, not Republican voters, that are driving the numerous efforts to repeal Obamacare. Barber concludes that even among the rich, donors are far better represented than voters, and more extreme.

He finds support in a recent paper by Jesse Rhodes and Brian Schaffner, who wrote (in a study of the House of Representatives), “we estimate that millionaires receive about twice as much representation when they comprise about 5% of the district’s population than the poorest wealth group does when it makes up 50% of the district.” They find that conservative politicians are more responsive to the donor class than liberals (a finding supported elsewhere).

But is the story here that politicians are responding to donors, or donors responding to the positions of politicians. Another paper by Barber suggests that extreme donors are driving extreme politicians. He examines state-level campaign contribution limits and finds that states with higher limits have more polarized legislatures. This suggests that politicians become more extreme to get money from the donor class. Patrick Flavin notes that in states with stricter campaign finance laws devote a large portion of their budgets to programs that benefit the poor. In another study, Walter Stone and Elizabeth Simas find, "that challengers closer to the extreme received greater financial contributions, which enhanced their chances of victory."

In a 2014 study, Barber, Brandice Canes-Wrone and Sharece Thrower examined how Presidents respond to the donor class. They find that, “there is no clear relationship between general public opinion on an issue and the president’s support for that issue.” However, they find,

when examining presidential issue support alongside co-partisan donor issue support, we observe a clear positive relationship. Particularly, as donors increase their support for an issue, so does the president. While this conforms to our expectations, we also see that there exists a similar positive relationship between the positions of the president and non-donors of his party.

American democracy is controlled by a small donor class who advocate in favor of issues that the vast majority of Americans oppose.