A New Study Proves That When Money Talks, Congress Listens

In theory, Congress should pass laws and legislation (which hit a record low in 2013)—and in a representative democracy, its members should listen to constituents and reflect their concerns and priorities. Yet we’ve shown how Congress prioritizes and advances the priorities of the affluent and corporate interests, even when they run counter to the vast majority of Americans. And now, new research shows that members of Congress and their staff hardly ever meet with constituents, let alone advance their priorities, and your chances of getting a meeting are much greater if you are a donor.

Researchers from Yale and U.C. Berkeley conducted a field experiment where they attempted to schedule meetings with 191 members of Congress. To test whether campaign contributions led to increased access, the experiment randomly assigned whether it would inform the legislators’ offices that those seeking the meeting were campaign contributors or simply local constituents. The results are shown below. 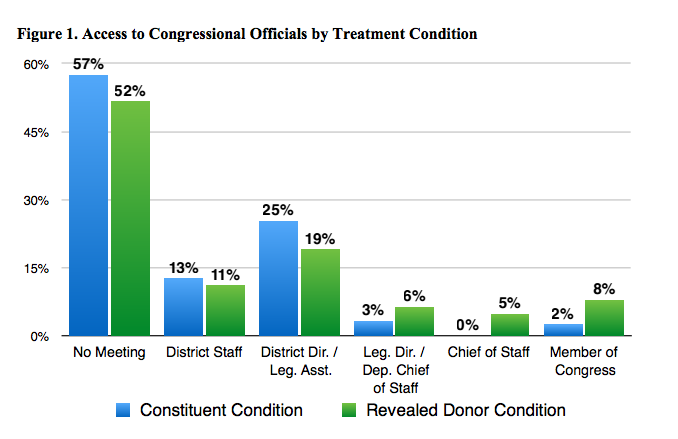 The results are telling for several reasons. One, the majority of attempts to meet with a legislator or senior staff are unsuccessful. Congressional members and staffers are not meeting with local constituents or local donors so how are they hearing about their concerns and priorities? Second, while still low, your chances of meeting with senior staff or the legislator are far better if you are a donor.

The implications of this study are significant. If Congressional members and their staff are not meeting with constituents or local donors, with whom are they meeting? Lobbyists and special interests seem a likely candidate. Currently, over $3 billion is spent on lobbying and the 12,279 registered, active lobbyists are meeting with someone. Interestingly, you are more likely to meet with district staff if you are just a constituent than if you are a donor.

The study also underscores what has become all too clear: money in politics is corrosive to our democracy. Legislators are in the position where their elections are becoming more and more expensive so they are forced to continually fundraise. This pressure likely explains why they are more willing to meet with donors, and in turn, also means that money buys you access.

And, access to legislators matters because they act on what they see are pressing issues and priorities. With affluent and corporate interests dominating the conversation, millions of Americans continue to struggle. For example, the U.S. Chamber of Commerce spends millions of dollars lobbying every year—over $74 million last year alone. One of their strongest oppositions is to raising the federal minimum wage. As a result, Congressional action to raise the minimum wage has been absent and, in real terms, the minimum wage is lower now than it was in 1968.

There's an antidote to all this money poisoning our system. Public financing amplifies the voices of small donors and gives candidates an alternative to only listening to big money. At the federal level, the Government by the People Act would match small donations and create People PACs that would aggregate the voices and power of ordinary citizens. Connecticut’s experience shows that once public financing was adopted, more people were brought into the electoral system and the legislature began passing policies that helped working and middle class families.

We should remember that Congress works for us. It’s time they started acting like it.