The Myth of the Flight from College

There’s been alarm raised recently over the decline in college enrollment over the past two years. Some have even gone so far as to argue that this decline is the result of masses of young people realizing that college “isn’t worth it”, even though the college wage premium—the gap between the average wages of college grads and those with less education—is at an all-time high.

The truth is that those prophesying doom over this decline are Chicken Littles, because not only is it untrue that masses of young people are suddenly choosing not to go to college, in fact, there hasn’t been much of a decline in college enrollment at all.

As the figure below shows, college enrollment has trended steadily upward over the past 45 years. It temporarily dips when the unemployment rate falls (and the economy is growing) only to resume its rise when the economy begins to slow again. The only exception to this trend was the late 90s, where college enrollment rose in the midst of the boom. Consequently, the dip in the enrollment rate is in the past two years is mostly expected, as the unemployment rate of 18-19 year-olds has fallen from 24.4% to 22%. 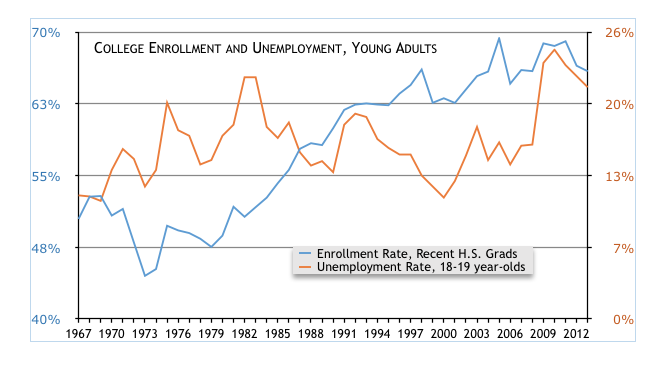 The real question, then, is whether the recent dip is larger than the fall in the unemployment rate would predict, i.e. whether there is something else causing fewer recent high school grads to enroll in college beyond the normal pull of an improving economy. 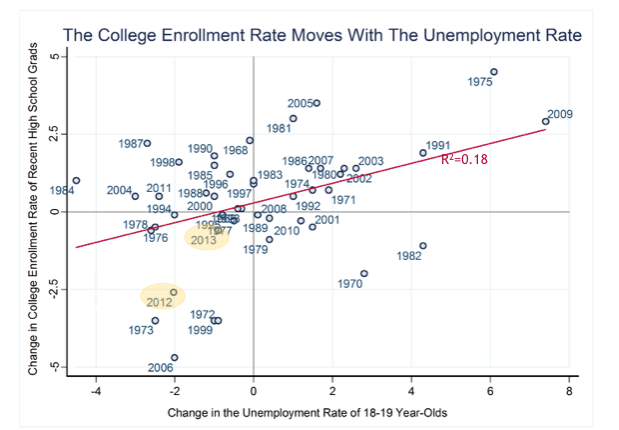 Exactly how far off trend are we? The unemployment rate for 18-19 year-olds fell by 3.4% between 2010 and 2013. Our trend line predicts that the college enrollment rate should have fallen by a total of 1.3% between those years, when it actually fell by 2.6%. In addition, this fall is probably in part due to skyrocketing tuition—4-year public colleges saw a 20% rise in tuition in the four years since 2008— rather than college suddenly not being worth it.

So, although enrollment fell by a bit more than expected—1.3%, which represents about 160,000 young people—this decline in enrollment is still in the normal range given the recovering economy, and is certainly not large enough to start making dire claims about a generation suddenly deciding to forego what is increasingly their only path to a middle-class life.