For Millions of Workers, Economic Opportunity Depends on Public Transit

Last year, Americans took over 10 billion trips on public transportation. These were trips to work, to school, to stores, to health care, to places of worship, and elsewhere. For millions of Americans, their quality of life rests on the quality of public transit.

America’s public transit, however, received a D-minus grade from the American Society of Civil Engineers in 2017, down from a D grade in the prior “report card.” In New York City, the subway system is in a “state of emergency” and has been compared to a “patient that has suffered severe trauma.” In Washington, D.C., the subway system is hobbled by a backlog of repairs and a lack of funding. In Chicago, the transit authority is underfunded and is considering service cuts. But these are actually some of the best cities for public transportation, because they have well-developed, if ailing and underfunded, systems. “Many Americans still have inadequate access to public transit,” the Civil Engineers pointed out. 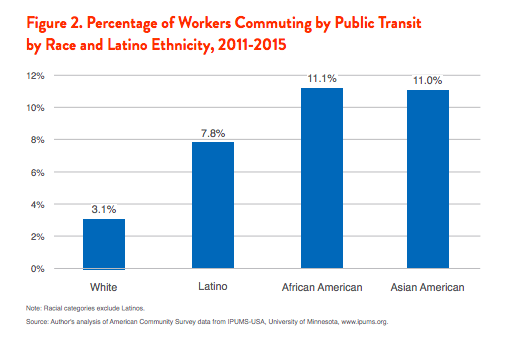 American public transit is underdeveloped. Many workers face long commutes or, worse, no access to many job opportunities because they have no means to travel to the job. Canadians use public transit twice as much as we do. People in Great Britain use it nearly 5 times as much; Germans nearly 6 times as much. We could and should be doing much more to ensure that all Americans have access to good public transit.

Unfortunately, the Trump administration and the Republicans in Congress have shown with their budget proposals that they favor reducing public transit, not expanding it. Rather than give away $1 trillion to the already rich via tax cuts, policymakers should invest in America’s infrastructure. Public transit investments would be a good place to start. Many of the neediest Americans depend on it.