Judge Gorsuch: The Court is a Problem on Money in Politics 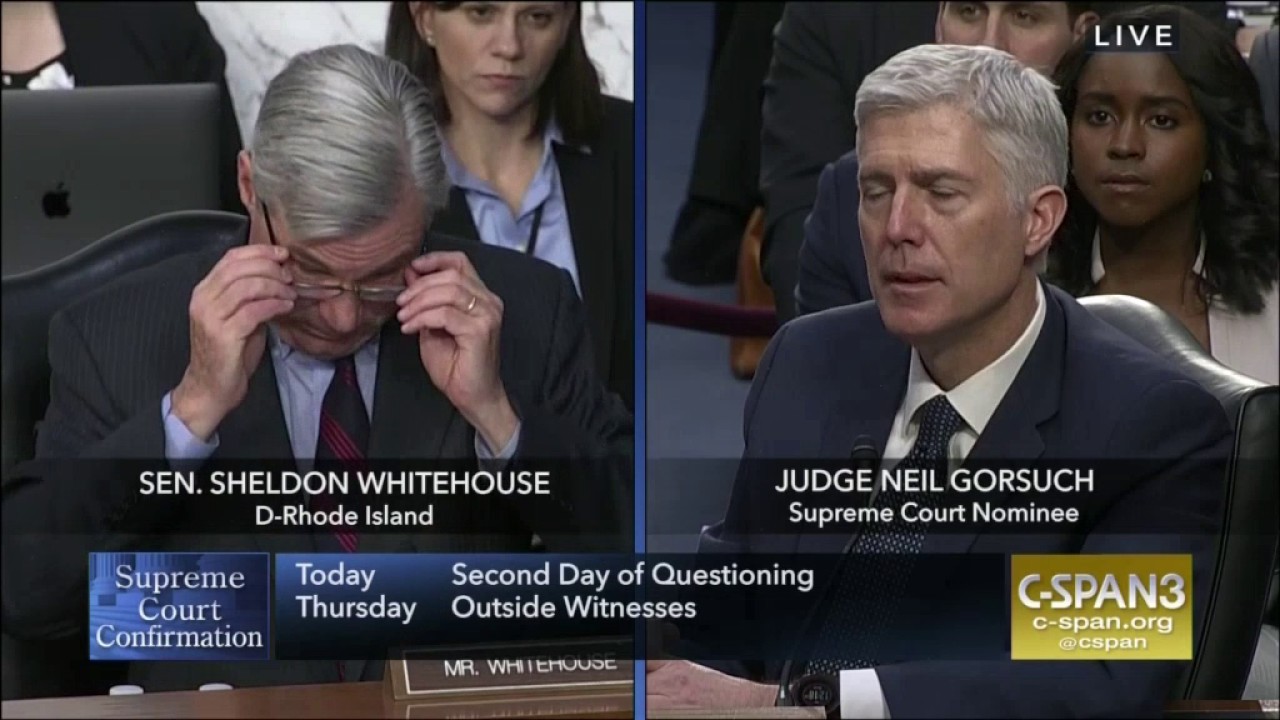 As Whitehouse explains in this clip, the flawed money in politics doctrine we’ve inherited from the Supreme Court does not acknowledge “the possibility that...similar kinds of concentration of power that destroy competition and innovation in the economic market can also take place in the political marketplace, and can destroy competition and innovation in the political marketplace.”

That possibility seems close at hand. As it stands, the United States faces staggering economic inequality and racial wealth gaps, while multi-billionaires can (and do) individually dump tens of millions of dollars into our elections each cycle.

With a Supreme Court split 4-4 on money in politics issues, the views of the ninth justice could not be more critical, nor could Senator Whitehouse’s question: does Judge Gorsuch believe there could be “a point where political power is so concentrated that in effect it is crushing the opposition rather than allowing free competition,” and is this “a potentiality that the Court should bear in mind as it makes its decisions?”

Judge Gorsuch’s (non-)response: under the Court’s decision in Buckley v. Valeo, Congress may legislate to prevent corruption or the appearance of corruption.

This answer could not be less satisfying. The 1976 Buckley decision—cited by Judge Gorsuch as a kind of safeguard against the kind of systemic capture that Senator Whitehouse described— is actually the warped bedrock of our entire broken system. In it, the Court declared that the only problem that campaign finance legislation can address is the prevention of corruption or the appearance of corruption.

While the Buckley Court did leave the door open for new evidence in the future, the Roberts Court has since doubled down on its corruption-obsessed reasoning. And while, in a rhetorical sense, we might think about addressing gross concentrations of political power as addressing systematic or structural “corruption,” what the Court means is quid pro quo: essentially, bribery of politicians.

In essence, then, the exchange between Senator Whitehouse and Judge Gorsuch can be distilled as follows:

Q: Can Congress address the potentiality that an elite donor class will completely take over our democracy?

A: Congress can legislate to address bribes to politicians.

While our democracy is certainly plagued by quid pro quos, the notion that bribery is the only way in which the wealthy donor class exerts dominance over American democracy just doesn’t hold water. Just ask the 85% of Americans who believe our campaign finance system is fundamentally broken. Or leading political scientists, who have found that in matters of economic policy, the United States actually resembles a plutocracy more than a democracy; that, “under most circumstances, the preferences of the vast majority of Americans appear to have essentially no impact on which policies the government does or doesn’t adopt.” Martin Gilens, Affluence and Influence 1 (2012).

Or ask Kelly Westlund, a Wisconsinite who ran for Congress without a personal network of wealthy friends, family, or associates. She recounts how the dominance of big money in politics discourages Americans of ordinary means from running for office:

When I went to the Democratic Party and told them I wanted to jump in, their representative asked me if I could raise a quarter of a million dollars in three weeks. I laughed at him and said, "No have you met Northern Wisconsin?" I am a young working class person and most of my network is waitresses and teachers and firefighters and police officers. I don’t have a network of millionaires and billionaires that I can call… When I said I couldn’t raise a quarter million in three weeks, his response was, "Then, you’re not viable." I knew the system was broken but it was so much worse than I could have imagined.

Our big money system imposes disparate barriers to full political participation on candidates and constituents of color. Facing staggering racial wealth gaps due to generations of state-sponsored oppression, candidates of color are less likely to run for office, and raise less money when they do. Officials elected under a system dominated by a disproportionately white donor class are themselves disproportionately white: in fact, 90% of elected officials in the United States are white, though 40% of Americans are people of color.

The problems facing our democracy run much deeper, and are more systemic, than bribes to particular politicians. Judge Gorsuch’s non-response to Senator Whitehouse’s vital question suggests he would continue the Court’s trajectory of rigidly focusing on bribery, and his record suggests the same. Senators should join their colleague Senator Whitehouse raising these critical issues, and ultimately should oppose Judge Gorsuch’s confirmation on these grounds.

Why New York State must act now on climate justice and public financing of elections.
In the media
Amshula K. Jayaram
Adrien Salazar

On the Cusp of Change in DC

DC’s City Council is closer than ever to having publicly-financed political campaigns.
Blog
Emmanuel Caicedo