Wallace C. Turbeville
How financial market practices not only risk catastrophic systemic failure like 2008, they constitute a massive extraction of value from the real economy by the financial sector.
Regulation & Financial Reform

The Federal Energy Regulatory Commission is going after JP Morgan Chase and Barclays for manipulation of wholesale power prices in California and Michigan. They stand accused of extracting vast sums from the process of bidding power sales to the transmission grid operators. Grid operators conduct just-in-time (minute by minute) reverse auctions in which power plant owners bid selling prices, as well as day-ahead auctions for some purchases. It was just this type of process that was manipulated by Enron and other generating companies that precipitated the California electricity crisis in 2000 and 2001.

Embedded in this story are so many aspects of the insanity that permeates our financial system that merely listing them is a challenge. Let’s start with the broadest possible point.

As I have written in a series of Demos research papers, current practices in the financial markets not only pose risk of catastrophic systemic failure like 2008, but also constitute a massive extraction of value from the real economy by the financial sector.

The trading markets perform a core social function, the interconnection of pools of investor capital with productive uses of capital by businesses, governments and households. Since the onset of financial deregulation, the trading business of the financial sector has migrated far beyond this social function. Most products and practices of banks and hedge funds have no connection to “capital intermediation.” The point of this activity is to transfer value from the markets to the financial sector, a massive cost to the economy and ultimately to the public. The following image depicts this process. 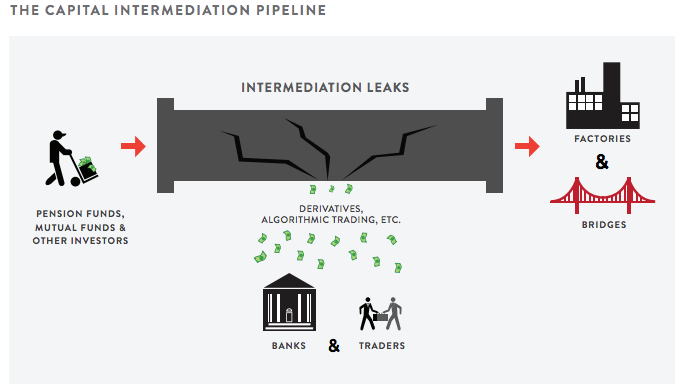 The recent power market scandal is a clear example of a “Crack in the Pipeline.” Wholesale power markets are virtually the same as derivatives markets. Electricity is not a physical substance like physical barrels of oil or bushels of grain; rather it exists as energized molecular particles. The banks understand that the market for power swaps and futures and the wholesale power markets are best viewed as connected parts of a whole. The banks’ ability to perceive this connection and act on it is unique. Therefore, the hundreds of millions of dollars taken out of the markets via manipulation as identified by the FERC is a pipeline crack through which money flows into the financial sector.

This particular crack is in fact much larger than the FERC allegations suggest. It relates to the steel and concrete power generating capacity owned by JP Morgan Chase and Barclays. But that is just the tip of the iceberg. Using derivatives, the banks can also synthesize ownership of power generation capacity so, from a financial perspective, ownership of the power sector is far larger than FERC sees. In addition, wholesale power sales exist at a given point in time. Power is auctioned on a minute-by-minute basis by independent transmission grid operators. However, the anticipated price for that power is traded for months, even years, prior to the delivery date and time. Thus a bank can synthetically own power generation capacity at a given place and time in the future for months or years ahead of time. That bank can buy it, sell it and buy it again as time passes.

The current episode also illustrates who is injured by the cracks in the pipeline. It is not just other traders or big corporations. Of course the big wholesale power purchasers paid the manipulated prices. But the wholesale price is passed through to consumers by the distribution utilities. The people who really pay for the value extracted by the financial sector are households. Electricity bills in California and Michigan were higher because of the misbehavior of the banks.

As the author of the “Cracks in the Pipeline Series,” I thank JP Morgan Chase and Barclays for the fine illustration of the pervasive extractive practices of the financial sector in today’s trading markets. It is a better illustration than I was able to conjure. You just can’t make this stuff up.

This case study highlights how New Economy Project and the Public Bank NYC coalition are pressing for the creation of a public bank for New York City, as part of a broader vision for economic and racial justice.
Research
Image