It Takes Nearly $8 Million to Join the Wealthiest One Percent

Joseph Hines
The most accurate threshold to enter the rarefied top 1% of wealthholders, $7,880,400, is almost three times as high as the Census estimates.
Image
Economic Justice
Racial Wealth Gap

You would need to hold over seven million dollars to be one of the top one percent wealthiest Americans in 2013.

Yesterday, a Pew post, also picked up by Ezra Klein, was making the rounds claiming that it would take around $2.5 million to enter the top one percent of wealth holders. The post used the Census' Survey of Income and Program Participation, an excellent way of understanding poverty.

The overall story is borne out by every survey: the top 1% wealthiest Americans have been adding to their net worth every single year. But the $2.4 million number Pew cites is far too low, because the Census doesn't adequately capture what's happening at the top.

More accurate surveys show a lot more concentrated wealth. The Federal Reserve's Survey of Consumer Finances, a demographic and economic survey based on interviews with over 4,000 families, is a better way to gauge wealth. Why? Among surveys, it's the most thorough way to look at the composition and distribution of the country's wealth, particularly those of high net worth.

Here were their findings, based on a 2013 survey: 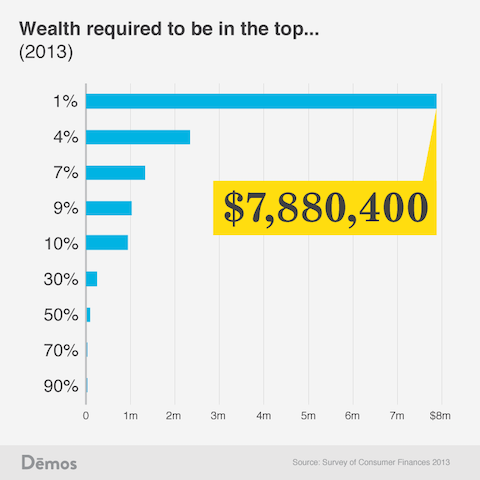 So the more accurate threshold to enter the rarefied top 1% of wealthholders, $7,880,400, is almost three times as high as the Census estimates.