The 2007 economic crisis and the lingering stagnation it wrought has led economists, philosophers and policymakers to a profound rethinking of how we measure economic performance and social progress. As Joseph E. Stiglitz, Amartya Sen and Jean-Paul Fitoussi write in the forward to their book, Mismeasuring Our Lives, during the run-up to the 2007 crisis, “the seemingly strong performance of some countries prior to the crisis (as predicted by GDP) was not sustainable and was based on “bubble” prices that exaggerated profits and output.”

The Inclusive Wealth Report introduces policymakers to a unique measure of economic progress that examines all of a country’s capital sources, including manufactured capital, human capital and natural capital. The Inclusive Wealth Index (IWI) measures the key inputs to a country’s productive capacity include natural capital, human capital and manufactured capital - later reports will also hopefully include a measure of social capital.  By examining progress towards a “Green Economy,” the Inclusive Wealth Report is a first step away from GDP and toward a more comprehensive metric of human progress.

GDP, the report notes, was developed during WWII to help policymakers determine what sectors of the economy were growing and which were lagging behind. It was never intended to be what it has become: the measure of a nation’s progress. The many shortcomings of GDP are laid out in a 2012 Demos report by Lew Daly and Stephen Posner.

The most important shortfall of GDP is that it measures income, not wealth. To see the difference, imagine two people, Bernie and Janice. Bernie earns $100,000 a year, but spends their entire on income on cruises to the Bahamas, pizza parties and wax statues. Janice earns only $50,000 a year, but uses $10,000 to go back to school and get a Master’s degree, $10,000 as a down-payment on a house and $10,000 to purchase stocks and bonds. Although Bernie’s income is higher, he has no capital stock, and therefore he has no wealth.

Countries, of course, are not like people. But the same distinction exists. Some countries spend their money on infrastructure and education, while others fritter it away on statues of their “Dear Leader.” Some countries work to use natural resources sustainably, others mow down rainforests.

GDP measures market output, but it does little to guide policymakers because it focuses exclusively on financial and physical assets. The most important forms of wealth are human, social and natural capital. This more expansive understanding of wealth is especially important given the current debate between austerity and reinvestment.

These shortcomings lead the UN to develop the Human Development Index which considered indicators like literacy, mortality as well as the standard of living. Neither index, however, takes into account the state of the environment and therefore the long-term sustainability of growth.

The idea of sustainable development, or what E.F. Schumacher termed “Buddhist economics,” is not a new one. Schumacher feared, “An attitude to life which seeks fulfilment in the single-minded pursuit of wealth - in short, materialism - does not fit into this world, because it contains within itself no limiting principle, while the environment in which it is placed is strictly limited.” The inclusive wealth framework is an important step towards a more comprehensive measure of economic growth.

The framework moves from examining exclusively material progress to a framework that includes leisure, spiritual aspirations, social relations and environmental security. The framework was designed by the great Kenneth Arrow in collaboration with Partha Dasgupta, Lawrence Goulder, Gretchen Daily, Paul Ehrlich, Geoffrey Heal, Simon Levin, Karl-Goran Maler, Stephen Schneider, David Starrett and Brian Walker. In a 2004 Journal of Economic Perspectives essay entitled “Are We Consuming Too Much?” they propose the following criterion, whether a society’s investments in human and manufactured capital offset their use of natural capital. 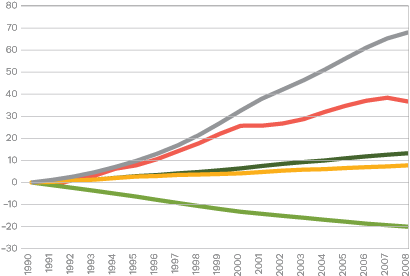 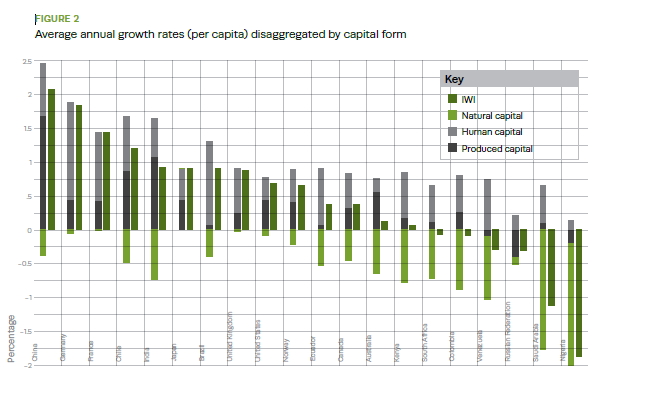 By taking into account the capital formations which determine future growth, countries can better prepare themselves for the future. The U.N. report suggests that countries should target monetary and economic policy to IWI to ensure sustainable, rather than short-term growth. Such a shift was recently suggested by Jeffrey Sachs in a recent Huffington Post op-ed:

Since the 2008 financial crash, our country has been reeling without getting its economic policy right. What we needed then, and need now, is a new kind of macroeconomics; one that aims for investment-led growth, not consumption-led growth. But investment-led growth can't be achieved by a temporary stimulus. It requires a very different kind of strategy and policy. Investment-led recovery requires a clear identification of our society's longer-term needs, needs that can be filled through complementary investments by the public and private sectors. Think of railroads and farms in the late 19th century; highways, cars, and suburbs in the 1950s; and information technology, smart grids, and low-carbon energy for our time. And it requires a set of public policies to spur those investments, in part by using smart public investments to help leverage a private-sector investment boom.

If economic growth were targeted to the IWI instead of GDP, such a change would be easy. However, since GDP does a poor job of accounting for investments in human capital and the depletion of natural resources, it encourages policymakers to look toward short-term boosts, often encouraging wasteful spending. The changes Sachs wants to see will be nearly impossible politically as long as policymakers are arbitrarily constrained by the shortcomings of GDP.