Katherine Culliton-González
If Americans truly want the soul of our democracy back, we must dismantle systems that support the violence we saw in Charlottesville.
Image
Democratic Reform

Over the last few days, national headlines, social media posts and local news segments have been dominated by reports of racist slogans and the terrorism of white supremacy. In Charlottesville, former KKK grand wizard David Duke said the white supremacist march that turned violent was “to fulfill the promises of Donald Trump.” White supremacists wore KKK regalia, brought heavily-armed private militia, carried torches and flags with swastikas, and chanted “Heil Trump.” Even after 32-year-old Heather Heyer was killed by an “alt-right” protestor ramming his car into hundreds of people who had gathered to keep Nazis out of Charlottesville, President Trump’s response was only to condemn “hatred, bigotry and violence on many sides.” In the words of the NAACP: 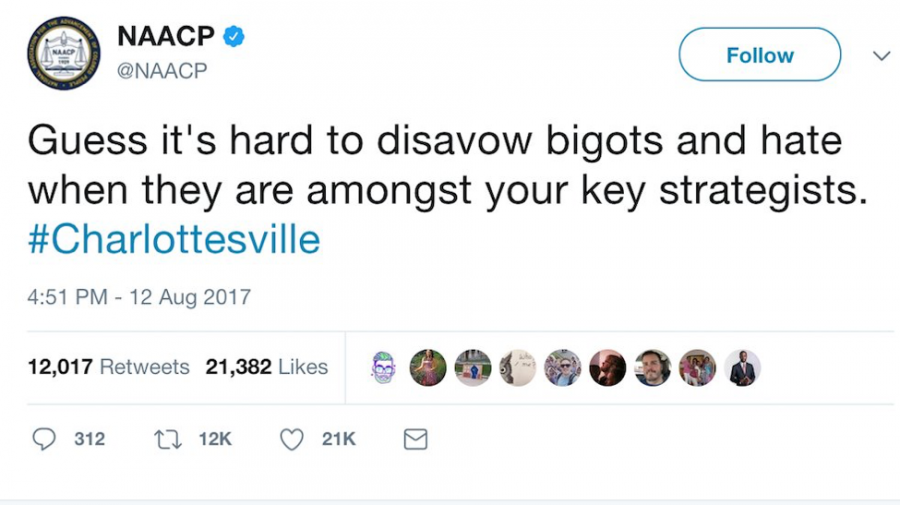 Former Virginia gubernatorial candidate Corey Stewart campaigned earlier this year on a platform of preserving Confederate monuments and demonizing immigrants. Of course, this is the same “nationalism” behind Trump’s racially discriminatory anti-immigrant policies. His strategist Steve Bannon and deputy Sebastian Gorka have said so directly, as has Attorney General Sessions, along with voter suppression czar Kris Kobach. This is part of why vigils for Charlottesville on Sunday night were co-sponsored by Latino and immigrant rights groups. And today is a National Day of Action for sane immigration policies, with thousands marching to fight against President Trump’s mass deportation machine.

Trump won the election by labeling Latinos “bad hombres,” threatening Black Lives Matter protesters, and criticizing a Muslim American father whose son was killed serving in the U.S. military in Iraq. Trump’s policies have followed suit by consistently criminalizing and threatening the same groups he demonized on the campaign trail. Under Trump, Immigration and Customs Enforcement (ICE) arrests have increased 40 percent, and ICE Chief Homan has said that all undocumented immigrants “should be afraid.” It is now clear that when his ratings go down, Trump plays to his base by promising more anti-immigrant measures, with racist overtones.

Any form of immigration relief is threatened under Trump. Immigrants and their allies are marching today to preserve Deferred Action for Childhood Arrivals (DACA), which protects nearly 800,000 young immigrants who were brought here as children. Ten conservative state attorneys general signed a letter threatening to sue if DACA is not dismantled by September 5. The future of Temporary Protected Status (TPS), a limited form of humanitarian relief for refugees from crisis-torn countries like El Salvador, Honduras, Haiti, Somalia and Syria, is also tenuous. These policies stave off only a small part of the damage of our country’s broken immigration system, under which 11 million people who are part of American families, communities and the economy remain undocumented. Yet Trump has proposed slashing legal immigration in ways that would cut off access to citizenship for generations of majority black and brown immigrants. Former generations, who are majority white, are effectively grandfathered in.

Today’s protests are also outcries against Trump’s sweeping, draconian, anti-immigrant policies including: targeting all 11 million undocumented persons for deportation (regardless of whether they have committed a crime), processing them through “expedited removal” without a hearing, conducting raids on a regular basis, prohibiting refugees from Central America and travelers from certain countries viewed as Muslim, detaining child asylum seekers, and returning asylum seekers to danger, all the while demonizing immigrants through bigoted stereotypes. As we saw in Charlottesville, white supremacists are thrilled with these policies.

The impact is devastating. A 3-year old boy named Josue and his mother, Teresa, “fled physical and sexual assault, and threats of kidnapping,” crossing the border in 2015. Josue was only recently released from the Berks County, Pennsylvania detention facility where immigrant families are held. He learned to walk and talk during the 645 days he was held in the “baby jail.” In California, adult asylum seekers like Alexander Burgos Mejia are appalled that they are treated like criminals, while there are increasing deaths, suicide attempts and hunger strikes in privately-run federal detention facilities.

Trump doesn’t seem to care that for many Latino immigrant families, deportation includes not only the cruelty of depriving children of their parents, but also the extreme fear of facing the same high risk of human rights violations they fled. Recent Central American deportees describe having fled specific violence targeting themselves and their families—and some have even experienced a family member being killed in their stead. Ten deportees interviewed this year all reported that upon deportation, they did not return to their home communities due to ongoing fear of persecution. Former Ohio resident Francisco Narcisco was recently deported and left by the U.S. government in Nuevo Laredo, Mexico, where gang members kidnapped, starved and beat him for several days until his girlfriend in Ohio sent $4,000. He described a roomful of deportees similarly kidnapped, including families with children.

And here in the land of freedom, we elected a presidential candidate who ran on a platform of racism and xenophobia, and now immigrant communities across the country are experiencing dramatic increases in hate speech and hate crimes. Statistically and psychologically, elementary schoolchildren have experienced the worst of these effects.

The millions of impacted children are part of our communities. As a parent, it is not lost on me that the terrorism in Charlottesville occurred in a college town where white supremacists beat a young black man with poles. Earlier this year, a young black man was murdered by a white supremacist at the University of Maryland. Children of color have not been safe for many years now, even in privileged spaces, and until white supremacy is dismantled, they will continue to suffer. If Americans truly want the soul of our democracy back, we must dismantle systems that support the violence we saw in Charlottesville. This requires criminal justice reform, immigration reform, expanding civil and human rights protections, reforming our education system, and naming and prosecuting hate crimes. Trump’s base came out in full regalia last weekend, but they are not the majority—in fact, they are fighting the changing demographics of our country. That is why we must keep marching together.

In spite of the obstacles, the people of Georgia organized, knocked on doors and cast their ballots — resulting in the surge toward this runoff. Over the next month, it is imperative that every single eligible Georgian turnout and make their voices heard at the polls.
Press release
Taifa Smith Butler
Image

"This election was not just about rejecting extremism. It was about communities coming together to secure their rights and protect their futures."
Press release
Taifa Smith Butler
Image