Latino/as distrust of the Republican Party was high even before explicitly racist language became mainstream again this year. Much of this distrust is rooted in the GOP’s discourse on immigrants and immigration, but immigration is not the only policy area in which Latinos and Republicans diverge in opinion. Other areas include social issues, policing and gun control, and climate change—all major components of the Republican platform. These issues are important when understanding Latino/as dwindling support for Republican candidates.

Once upon a time, when Latinos were considered a major part of the future of the Republican Party, social issues such as opposition to same-sex marriage and abortion were at the forefront of debate. The central assumption at the time was that Latinos’ religiosity was key to luring them away from a Democratic Party with moral values at odds with the devout Latino population. 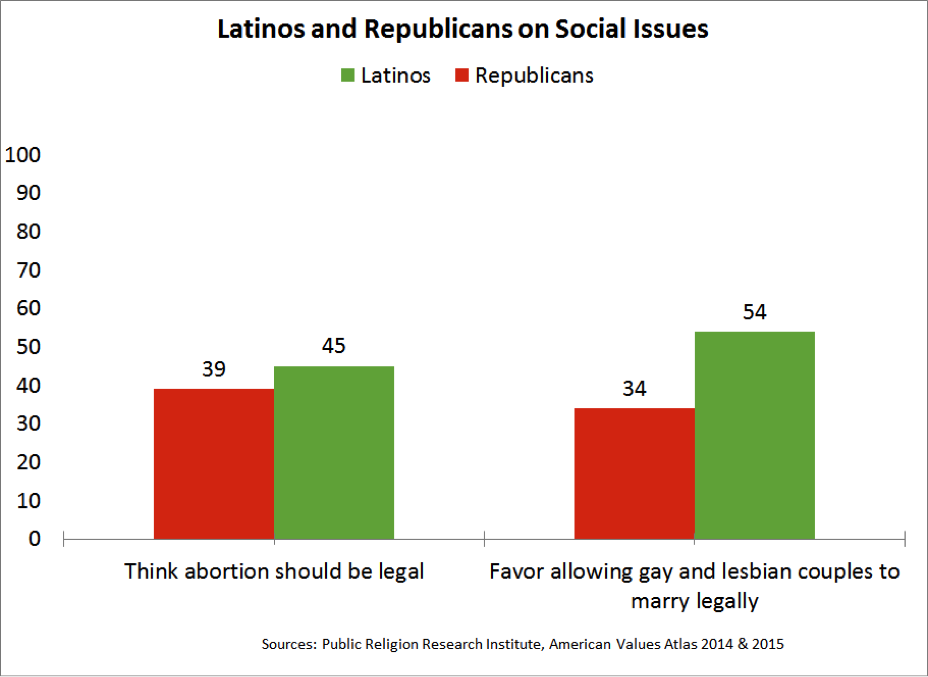 That assumption may have once been true. A 2014 report by Public Religion Research Institute (PRRI) found that only about one-third of Latinos favored same-sex marriage in 2003. A decade later, in 2013, a majority of Latinos favored the policy, and they continue to do so today. In fact, while a majority of Latinos (54 percent) now support same-sex marriage, just about one-third of Republicans (34 percent) do, meaning Republicans’ views are now in alignment with the views of Latinos of nearly a decade and a half ago.

The divide is not as wide on the issue of legal abortion. Nearly half of Latinos believe abortion should be legal while about 4-in-10 Republicans do. However, the large gap between Latino Democrats and the shrinking number of Latino Republicans on this issue suggests that the divide between Latinos and Republicans will widen in the future if political party identification trends remain as they are now.

The divergence between Latinos and Republicans on social issues is likely driven by the growing secularization of Latinos. As Latinos become less religious and Republicans continue using a conservative interpretation of Christianity to guide their policies, expect the divergence to continue.

Calls for reforming policing practices across the country become louder in recent years. The high-profile deaths of men and women of color at the hands of the police, including those captured on video earlier this summer, have fostered a conversation about the treatment of people of color by the police. In addition to violence at the hands of the state, people of color have also been the targets of mass murderers and part of the ongoing debate about gun control. On these matters, Republicans and Latinos, like most people of color, stand at opposite sides, a pattern I mentioned last week when I discussed confidence in the police. 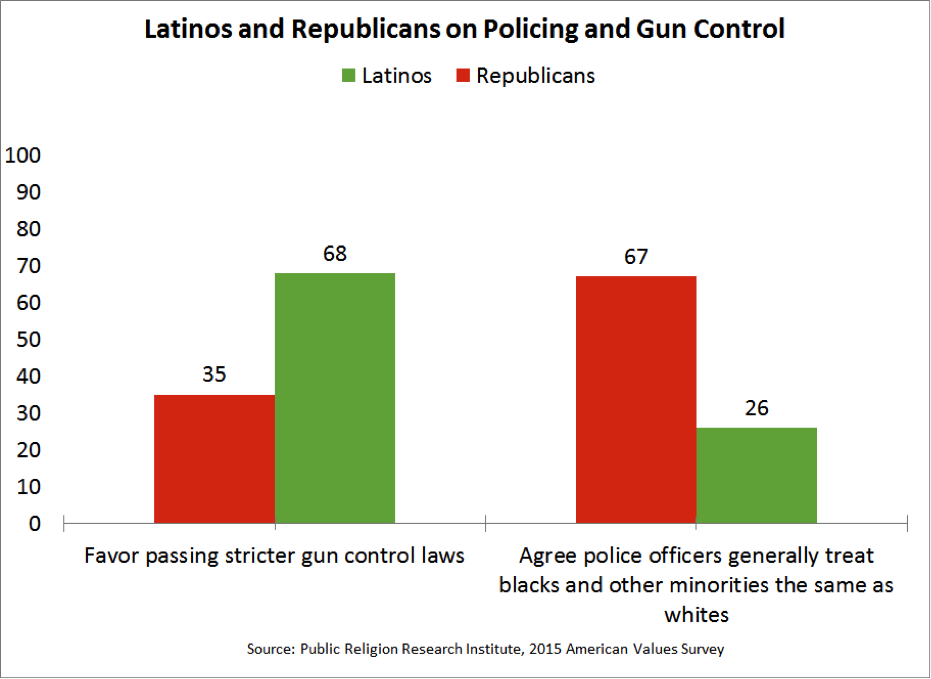 It comes as no surprise that Latinos and Republicans have diverging opinions on whether blacks and other minorities receive equal treatment as whites by the police. About one-quarter (26 percent) of Latinos agree that this is the case. Republicans think there is no difference in how the police treat whites and racial minorities; two-thirds agree that police treat blacks and other minorities the same as whites. These differences hinge on how both groups interpret the debate surrounding abuse of people of color at the hands of the police.

When asked whether the instances of police abuse captured in the media are part of a larger pattern or isolated instances about 6-in-10 Latinos (57 percent) consider that the former is at play. That is, that there is a pattern of police abuse of people of color around the country. Only about one-quarter (24 percent) of Republicans think police abuse is a systemic problem, the vast majority consider it to be isolated incidents.

Responding to the Threat of Climate Change

Republicans have long considered climate change to be part of an international conspiracy. This belief is reiterated in their 2016 platform. According to a 2014 PRRI poll, many Republicans either deny that it is a problem or don’t think it is something that affects Americans, but rather others around the globe. Latinos, on the other hand, consider climate change to be a matter that affects them personally. These views affect how they perceive the role of government in solving the issue. 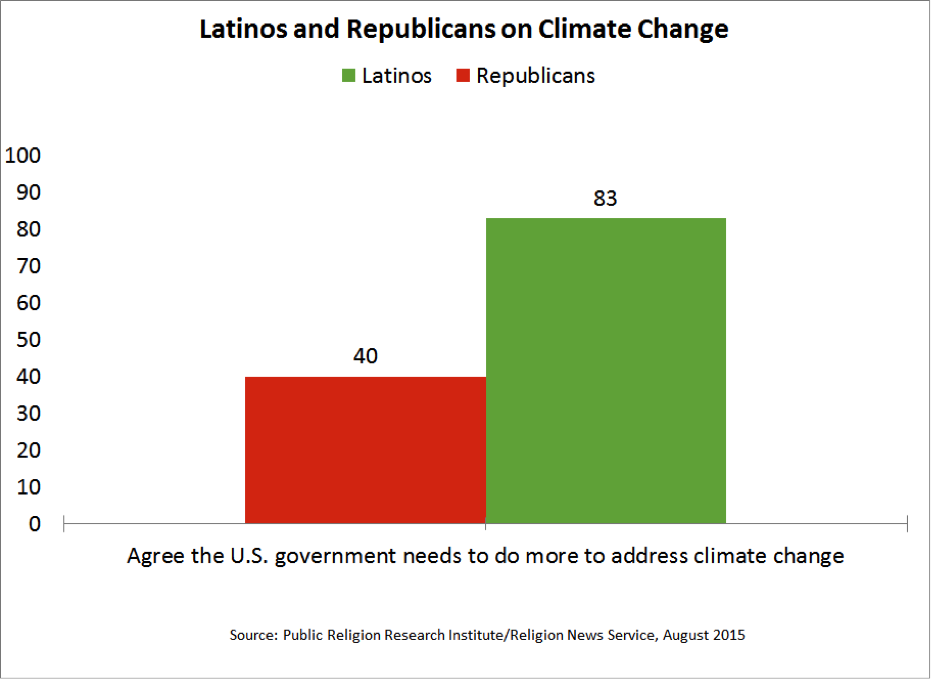 This is the policy area where the views of Latinos and Republicans diverge the most. More than 8-in-10 (83 percent) Latinos agree that the government needs to do more to address the issue of climate change, more than double the percentage of Republicans (40 percent) who also agree with the statement.

The differences between Latinos and Republicans on these issues should put to rest the notion that Latino/as are “natural conservatives.” They are not conservative on social issues, on state use of force, and on the use of the power of government to solve a climate crisis that affects us all.

Even if Republicans embraced immigration reform overnight, there is enough divergence on so many other policy areas that it is unlikely Latino/as’ voting patterns could drastically change overnight. Moreover, the prospects of Latino/as joining the GOP soon dim even further when taking into account that young Latinos, the fastest-growing segment of the population, are more liberal than the older cohorts. Whether the Democrats can benefit from these demographic and policy differences is a subject I will explore next week.