How to Reduce the Voting Gap

Sean McElwee
Over the last three decades, the class bias of the voting public has increased dramatically. We can change that.
Voting Rights & Access

My recent Demos explainer discuss the implications of the class bias in voter turnout. Over the last three decades, research suggests, the class bias of the voting public has increased dramatically. In the 2012 election, there was a 33 point gap between the turnout rate of the highest bracket ($150,000 or more) and the lowest bracket ($10,000 or less). My article explores the implications of this gap, but it’s also important to know the causes. 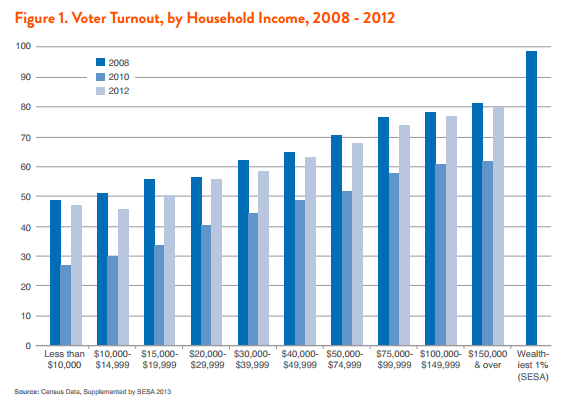 The first part of the problem is registration.

One study finds, “state voter registration laws pose a substantial barrier” to the mobilization of low-income voters. We can see this in the Census data from the 2012 election (below). Among eligible voters in the highest bracket 87.1% were registered in 2012, compared with only 63.2% of those in the lowest bracket. This registration gap certainly plays a role in turnout inequality, and unnecessary burdens don’t help. Worse, many states are currently purging their voter rolls, which primarily affect people of color and the poor.

States should adopt same-day registration, which studies show reduces the class bias of the electorate by allowing unregistered voters to vote at the polls. Low-income voters juggling work and family are often unable to register in time, and should not be penalized for that. Another helpful reform is the National Voter Registration Act or “Motor Voter”, which requires state DMVs and public assistance offices to offer voter registration applications to people customers. This has also been shown to reduce the class bias of the electorate and boost registration. However, in many cases, states are not compliant with the statute.

In the 2012 election, there were wide class differences in turnout among registered voters. To measure this, I subtracted turnout from registration by class. As the chart below shows, there was a 16 point gap between registration and turnout among the lowest bracket, but only a 7 point gap at the highest bracket. This suggests that a significant part of the problem is voting barriers.

There are several voting barriers. Since 2006, 34 states have passed some form of voter ID law. Voter ID laws have a disproportionate impact on the young, people of color and low income voters. Further, these laws are explicitly aimed at reducing low-income turnout. One study on the motivations of voter ID laws finds that, “larger increases in class-biased turnout, indicating higher turnout among lower income voters relative to wealthy voters, is significantly associated with a larger volume of proposed legislative changes.” That is, when low income voters turnout at a higher rate, Republicans are more likely to propose voter ID laws. One study finds that the indirect costs of these laws—transportation, lost work time and the cost of acquiring the relevant documents—are higher than poll taxes were at the times they were instituted. 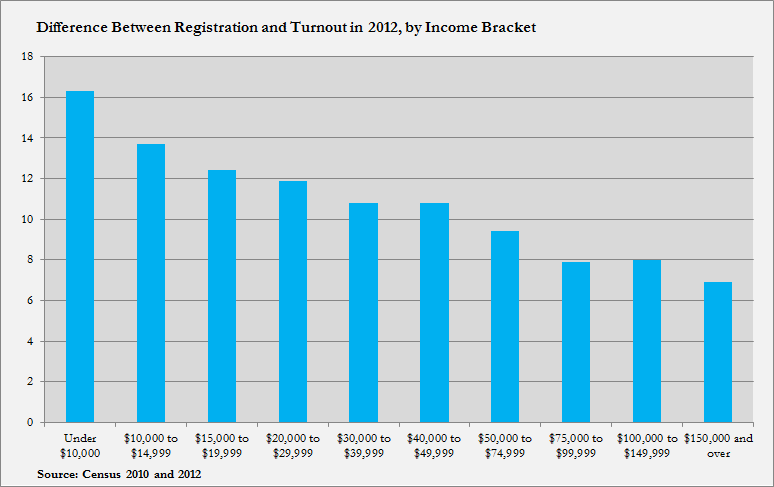 Additionally, states across the country have reduced early and weekend voting, both of which are necessary for low-wage workers who often cannot get off of work to vote (often due to unpredictable schedules). Further, felony disenfranchisement laws, which have influenced the outcome of both presidential and Senate elections will disenfranchise almost 6 millions voters this year—most of them poor and people of color.

The class bias in the electorate is driven by both registration and voting barriers. Over the past four years we have seen increasingly intense efforts to reduce the turnout of low-income voters. Such efforts will only further increase the class bias of the electorate.