How Low Voter Turnout is Already Hurting the Poor

In the wake of increasing voter identification requirements in Texas, analyzing voter turnout is becoming critically relevant to fully comprehend political outcomes. The United States already ranks among the lowest of developed democracies for voter turnout—even in presidential elections—and criticism against the new voter ID laws is that they will not only further decrease turnout, but decrease it specifically for the lower classes.

A study by Vincent Mahler finds that voter turnout for the lowest income quintile in the US is already significantly lower than for the highest quintile—a disparity of 36.1% in the years he studied. The US had the greatest income disparity in voter turnout (voting gap) among the fifteen developed democracies studied, and current data show that this gap has remained persistent. In the 2012 election, 80% of those earning more than $150,000 voted, while only 47% of those earning less than $10,000 voted in the most recent midterm election, those earning less than $50,000 made up 36% of voters, but 48% of the population.

What is the effect of this unequal turnout on political outcomes? Mahler finds there is a strong correlation between having more equal turnout among voters and more redistributive policies. Even before assessing the income class of the electorate, higher percentages of voter turnout is associated with more redistribution. 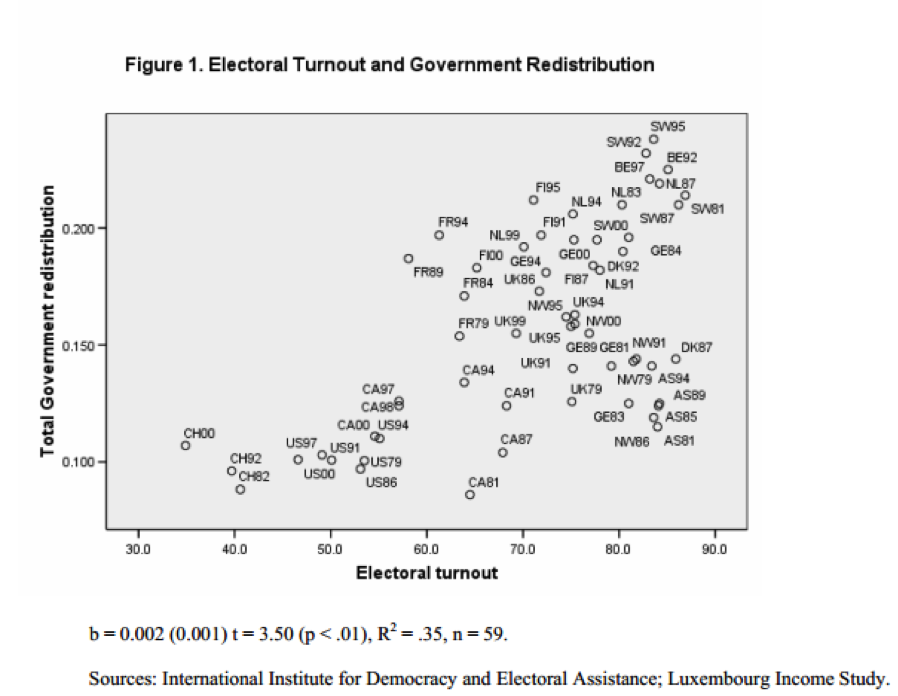 This doesn’t mean that having more low-income citizens in a country is related to more redistributive policies. Rather, when these citizens vote, they have an effect on legislation.

The Mahler study compares turnout in federal elections among developed countries that have different regulations for voting. Australia, which has a mandatory voting requirement for all adult citizens, has a voting gap of less than one percent.  In Denmark, where identification is not required to vote, the voting gap is less than six percent. In European countries that do require identification, a national ID card distributed to every citizen for multiple purposes can be used as acceptable proof of identity. Canada includes utility bills and leases as one of the two necessary pieces of identification if a photo ID is not available, and even has a way for people to vote if they lack those documents as well. They boast a voting gap less than half of that of the US, where most states require some form of identification to be presented at the polls, although the states differ widely on specifications.

By exercising their right to vote, a group can influence elected officials, but when studies show that year after year, a certain group is not able to vote, and legislation is passed creating additional barriers for those citizens, do the elected really need to campaign for their support in order to win an election? The median voter theorem argues that in poorer societies, the median voter will have a lower income, and policy that aids lower income voters will result. However, the median voter theorem assumes that all eligible voters will be able to cast their vote. 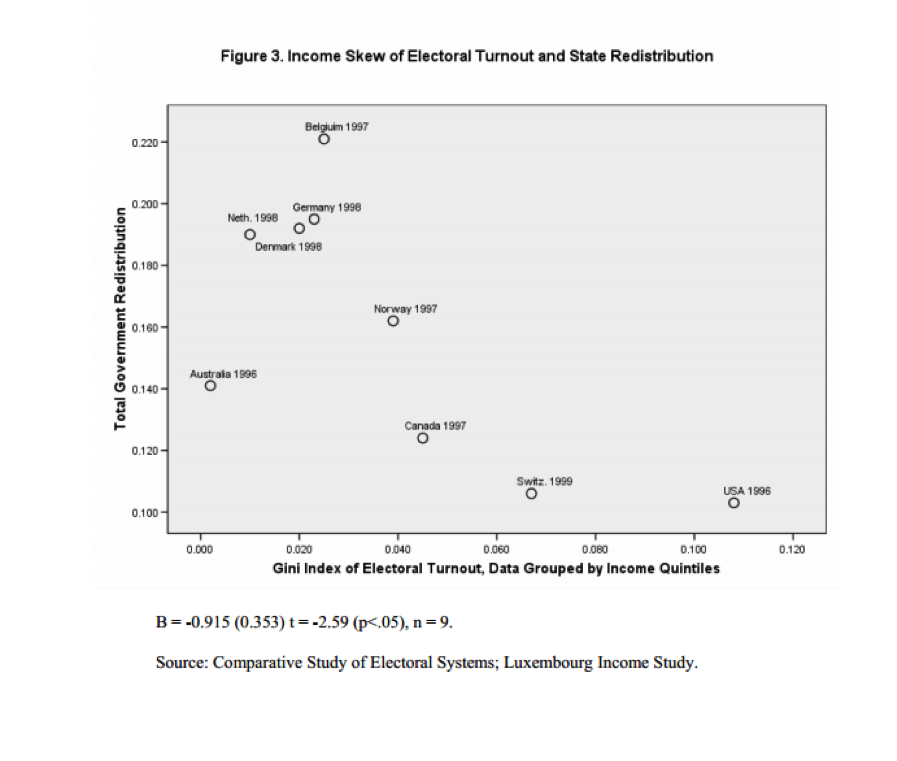 The United States has the largest class bias in electoral turnout and the least amount of government redistribution. While the states with the smallest voting gap do not necessarily have the highest redistribution, there is an unmistakable negative trend.

Same-day registration, early voting, increased hours for the polls, and decreasing the restrictions on voter identifications all boost voter turnout and will decrease the voting gap in not only in income, but for the other shared characteristics of many nonvoters such as race, age, and level of education.

Still Fighting for Voting Rights 57 Years after the VRA

Fifty-seven years ago, the Voting Rights Act became law. Today we find our democracy regressed in a moment eerily similar to that turning point in 1965.
Blog
Taifa Smith Butler

Everything about this law is thoroughly anti-democratic and designed to silence Black and brown people as the number of Floridians of color who are eligible to vote increases.
Press release