The most likely consequence of the sequestration will be be slower growth and lower tax revenues, and it’s a distinct possibility that the sequestration could actually increase the deficit. This week, the Supplemental Nutrition Assistance Program will face a $5 billion cut, which will likely slow economic growth further.

Repealing the sequestration economy could gain 1.6 million jobs and increase GDP by as much as 1.2% in FY 2014. A report by Macroeconomic Advisers, LLC finds that discretionary spending cuts since 2010 have reduced annual GDP growth by 0.7 percentage points since 2010 and raised the unemployment rate 0.8 percentage points, representing a cost of 1.2 million jobs. Goldman Sachs released the chart below in 2012 showing how federal policy since 2010 has been acting to slow growth. 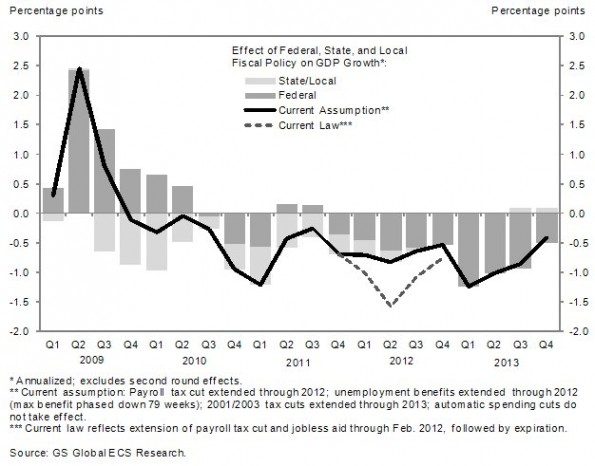 The intellectual backing for tough austerity has been hammered this year. Recently, the IMF warned that private debt is slowing growth far more than government debt. Earlier this year a UMass-Amherst graduate student tried to replicate the results of the famous study by Carmen Reinhart and Kenneth Rogoff that purported to show how debt dragged on growth, he found it riddled with errors.

Although the famous spreadsheet error (wherein RR failed to include cells in a calculation) made the biggest splash, the deeper error was a logical fallacy: Post hoc ergo propter hoc. Economists like Paul Krugman and Brad Delong argue that government debt doesn’t slow economic growth but rather slow economic growth causes the government to take on more debt. Research by Miles Kimball and Yichuan Wang find that this is the actual causation, so there is no evidence or logical reason to believe that reducing government debt right now will help the economy grow.

Britain provides an example of what could go wrong if the U.S. continues pushing austerity: austerity hobbled the economy and actually increased the UK’s debt as a % of GDP. Earlier this year, the CBO wrote:

CBO expects that the budgetary effects of automatic stabilizers will remain large because of the continued weakness in the economy, which is caused in part by the fiscal tightening that is occurring in calendar year 2013 under current law.

Half of the deficit in 2013 this year is due to automatic stabilizers (the reduction in revenues and increase in spending that occurs when an economy enters a recession). If the economy was in full swing then, the deficit would immediately be halved.

Running deficits during a recession is one time when the government can have its cake and eat it too. Interest rates are low, so the cost of borrowing is negligible and the economic growth will eventually turn the deficits into surpluses, exactly what would have happened in the 2000s if there had been no tax cuts. In fact, the famous deficit-reduction of the Clinton era was due to economic growth, not policy.

This case study highlights how New Economy Project and the Public Bank NYC coalition are pressing for the creation of a public bank for New York City, as part of a broader vision for economic and racial justice.
Research

A Budget is About Priorities. Biden’s Strike Reason for Concern.

Congress still has an opportunity to craft another legislative package and resuscitate crucial elements of the Build Back Better package.
Blog
Daniella Zessoules
Image

Don’t Listen to the Deficit Squawks

Corporate and far-right special interests incite deficit fears by manufacturing an artificial crisis around debt. This has consolidated wealth and power in predominantly white corporate hands—and at the expense of Black and brown communities—for decades.
Blog
Amy Traub