How to Create Real Full Employment for All

America will be greater when everyone who wants to work can find a job. Unfortunately, the Federal Reserve and our policymakers don’t seem to think so. They have not done all that they can to put Americans back to work. The Federal Reserve is stepping on the economic brakes, although there is good reason to think that we can put many more Americans back to work. The Trump administration and the Republican leaders in Congress seem determined to do major damage to the economy and cut every program for poor and working-class Americans just to help millionaires and billionaires get richer.

Previously, I discussed the fact that prime-age adults, 25- to 54-year-olds, are working at rates lower than they did at the peaks of the economy in 2007 and 2000. There is no reason to think that fewer adults want to work today than a decade or two ago. A better explanation is that good jobs are harder to find today than in the recent past.

My prior discussion hid a key point about the American economy: racial hierarchy. As the figure shows, prime-age whites have the highest employment-to-population ratio. Whites are followed by Asian Americans, then Latinos, and then African Americans. The figure shows that this pattern is pretty consistent over time. People of color have as much desire to work as whites. Much of this hierarchy is a result of discriminatory practices and inequalities deeply embedded in the labor market. 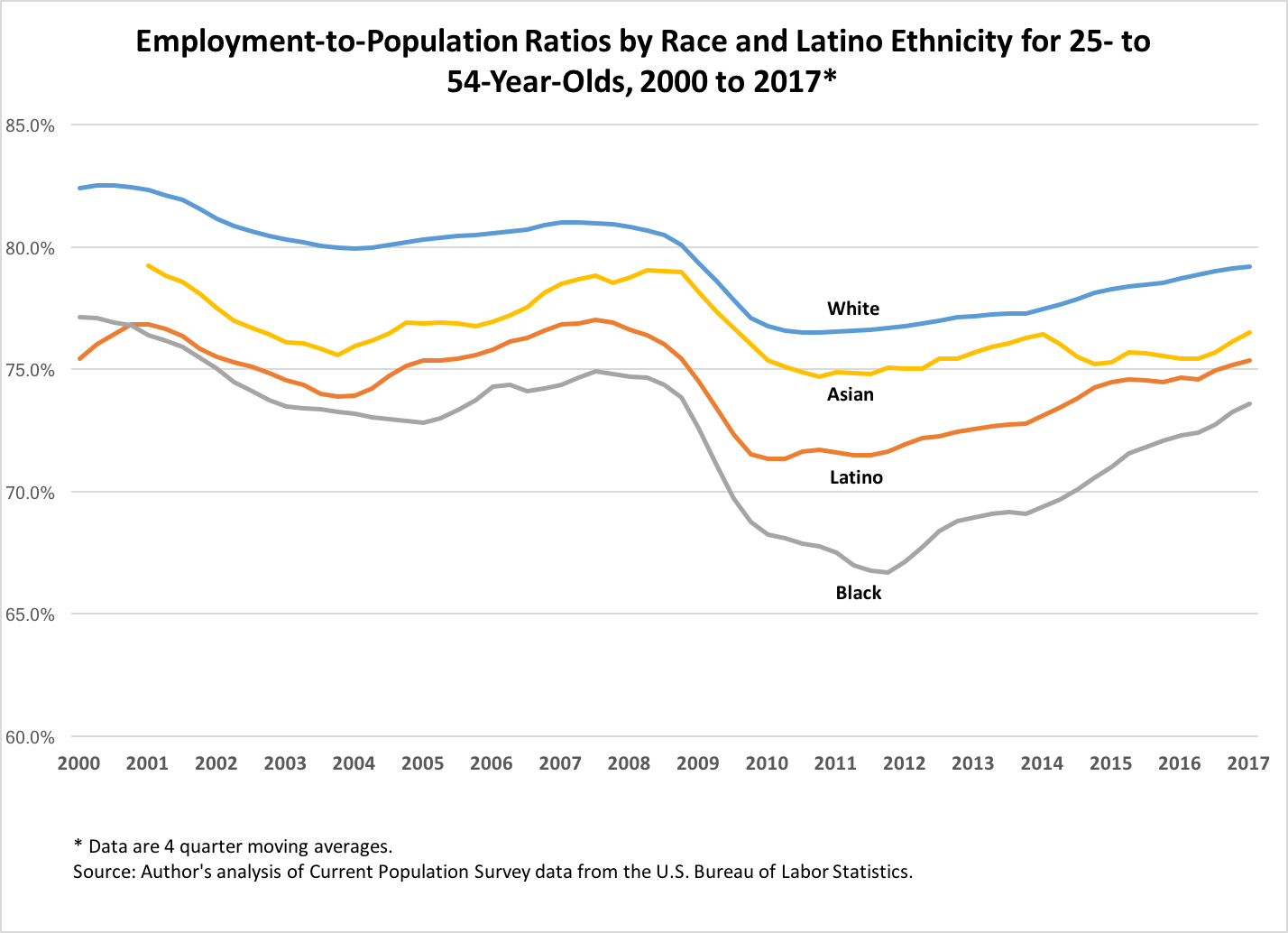 Previously I calculated the number of jobs needed to return each group back to the level they experienced in 2007 and 2000. While this would be a significant improvement for each group, it would still recreate the racial hierarchy we see in employment. The ideal situation would be for all groups to have a rate of employment today that whites had in 2000. To reach that level, we would need about 3 million jobs for whites, about 1.7 million for Latinos, about 1.5 million for African Americans, half a million for Asian Americans, and even more for American Indians and those who identify with more than one race.

To see that these jobs reach the communities of color that have been most excluded in the job market—African American and American Indian communities—it would be wise to target investments and institute hiring practices to benefit these communities. Policies that lead to strong job creation and targeted hiring can make certain that all Americans who want to work can find a job.