Tomorrow, Hillary Clinton will release the names of her top bundlers, wealthy people who have reached the individual contribution limit and therefore volunteer to collect checks from their rich friends to give to candidates in a “bundle.” Many bundlers bring in millions—in 2008, bundlers who brought in more than $100,000 were called “HillRaisers.”

Although the Supreme Court explicitly mentioned that requiring disclosure of donors would be acceptable in their interpretation of the 1st Amendment, laws requiring such disclosure are spotty. Candidates are not required to disclose their bundlers, and Clinton can therefore be commended for the step, which was also taken by Obama in both elections he ran, and McCain in 2008. She is the first to do so this year.

Clinton has also made other positive signals about fighting the influence of money in politics. She promised to appoint justices that would overturn Citizens United, a welcome sign, because Citizens United has done dramatic harm to our democracy. My colleague Brenda Wright has some great history on Buckley v. Valeo, the “original sin” of campaign finance. But, for all its merits, disclosure is only the first step: we need a system that doesn’t favor the priorities of a rich donor class. The donor class is the tiny portion of donors, the .01%, who gave 41.8% of campaign contributions in 2012 (see chart).

The policy bias towards the donor class has long been documented by academics. In a recent study, Nicholas Stephanopoulos expanded that analysis to show the deep gender and race biases in representation. He finds at the state and federal level, women and people of color exert little or no influence on policy. Indeed, he finds evidence of a negative correlation between the preferences of women and policy. As it happens, the donor class is 90% white and 70% male. But the donor class isn’t like the rest of us, they have policy priorities that differ from average Americans (see chart). 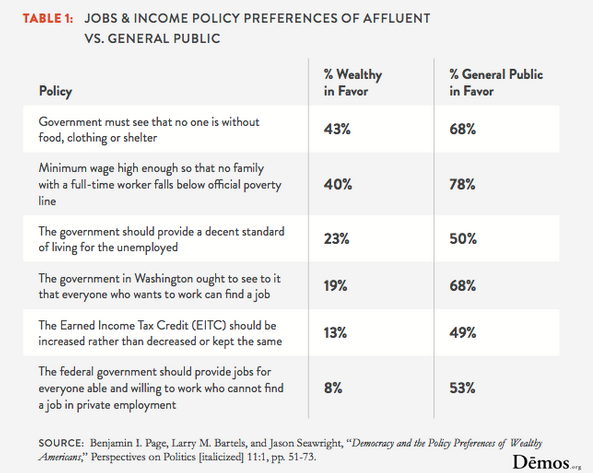 There is strong evidence that rich donors do indeed drive the political process. In fascinating recent study, Michael Barber, Brandice Canes-Wrone and Sharece Thrower show that Presidents are disproportionately responsive to donors, compared to non-donors. They were able to examine a set of issues in which donors and voters in the same party disagreed. They find:

In another study, Barber showed that rich donors get more representation than rich non-donors. Brian Schaffner and Jesse Rhodes find, “the roll call voting of members of Congress may be more strongly associated with the views of their donors (including outside donors) than with those of their voting constituents.” Given the race, gender and class skew of donors, as well as their more economically conservative views, this is a bad sign for democracy.

While it’s admirable Clinton is disclosing the names of the hyper-rich folks funding her campaign, it would be even better if we had a system in which she wasn’t held captive by them, and could pursue policies in the interest of ordinary Americans. For that, we need a fundamental re-imagining of American democracy, including strong defenses against the influence of big donors, universal turnout and a robust public financing system. Even better than disclosing donors would be to stop letting them write our laws.