Unlike the overall labor force, young adults saw unemployment rates rise in the month of August.

The Bureau of Labor Statistics released a disappointing employment report this morning, showing job growth that fell below economists’ expectations. The overall unemployment rate declined in August to 8.1 percent, but that drop was due to workers leaving the labor force rather than the month’s employment gains. Like their older colleagues, young workers also fled the labor market, but their exit did not cushion the lack of opportunity; unemployment rates rose among this population for the first time since summer began.

The drop in the labor force participation rate among workers ages 20 to 24 was greater than that of any other age group last month. For many students under 25, August presents the end of the working season as the fall semester begins. But even considering the exodus of college students from the labor market, the change in participation among this age group is striking. Just 69.7 percent of these young adults are working or looking for work -- that’s more than 1 percent fewer than in the month of July and the lowest labor force participation rate in almost 40 years. Workers leave the labor market when they believe that the payoff to job-seeking does not make up for its costs – that is, when their hopes for employment diminish to the point where looking for work seems like a waste of time. With a 13.9 percent unemployment rate, the prospects for 20 to 24-year-olds are not as bright as those of older workers – and they are getting worse. Despite a 1.1 percent net loss in participation, the unemployment rate rose from 13.5 in July to 13.9 in August. That means that fewer people are looking for jobs, and more of those who are looking cannot find them. 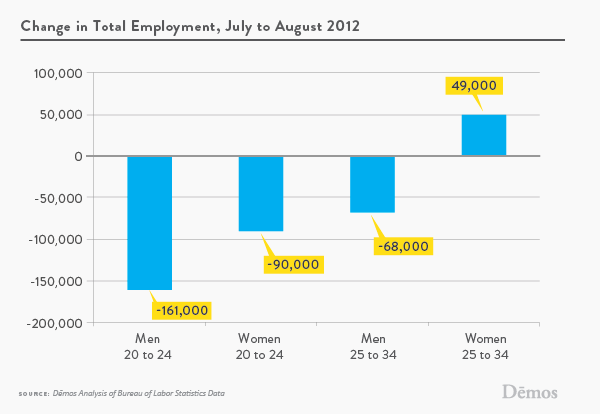 The 25 to 34-year-old cohort also saw conditions worsen over the past month.  These workers had been clinging to an unemployment rate on par with the overall working population since April, even out-performing the national rate in July.  Prior to April, workers ages 25 to 34 had seen higher than average unemployment rates since mid- 2008, so finally matching the national average provided some hope that the disadvantages facing younger workers were becoming less relevant as the economy grew.  In August, the unemployment rate for 25 to 34-year-olds rose by one tenth of a percentage point to 8.3 percent.  The change comes along side zero change in labor force participation, with 25 to 34-year-olds engaged in the labor market at a rate of 81.1 percent – down from the beginning of summer but steady since July.  As a whole, these workers are not leaving, but they are not getting jobs either.

But there is good news for one subpopulation of young adults.  Unemployment among working women ages 25 to 34 declined from 8.6 to 8.3 percent.  Labor force participation for the group also declined, but by just 0.1 percentage points and that decrease was accompanied by the only instance of a net gain in employment over the month.  Young men ages 25 to 34, in contrast, experienced an increase in unemployment to 8.3 percent – leaving men and women in the age group at an equal unemployment rate just above the national average.  Although women in this age group were more likely to leave the labor force than men, they also received the greatest benefits to job seeking out of all young adult workers.  They were the only group to see their employment-population ratio increase.

As several analysts have pointed out, August marks the 30th straight month of private sector job growth under Obama.  Job growth above 200,000 per month drew young workers back to the market in early 2012.  But as the winter’s higher rates of job creation dwindled in the spring, the participation of younger workers began a downward trend.   And with labor force participation rates hitting their lowest point in a generation, it is clear that America’s slow and steady growth is inadequate to keep young adult workers confident in their economic prospects.

Amazon has cashed in on the COVID economy, enjoying surging sales and a soaring stock price.
Blog
Amy Traub
Image

Back to Work or Else? Risky Reopening Policies Put Black and Brown Workers in Danger

We're all seeing systematic efforts to shift the economic and health risks of the pandemic from governments and employers and onto the backs of disproportionately Black and brown workers.
Blog
Amy Traub