A Great Day for Wells Fargo. But Where's the Outrage?

Yesterday, Wells Fargo was slapped with $175 million fine for systematically steering minority homeowners into higher interest loans -- and, indeed, providing financial incentives for brokers to stick borrowers with the highest rates they could. Abhorrent behavior. 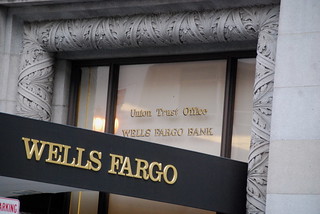 Yet today, all seems forgotten and the sun is shining once more at the bank's San Francisco headquarters. As the New York Times reported this morning:

Wells Fargo reported its 10th consecutive quarter of earnings growth as a result of a booming business originating and refinancing mortgages.

The bank’s second-quarter profit was a record $4.6 billion, a 17 percent rise from the $3.9 billion profit it reported a year earlier.

The gargantuan size of the bank's profits this quarter -- larger than the GDP of many African countries -- drives home the point I made yesterday, which is that the penalty against Wells Fargo's for lawbreaking is paltry in the grand scheme of things. That, along with the fact that no individual executive has been held accountable or charged with any crime, all but assures more future wrongdoing by Wells Fargo and other banks.

The other depressing thing about these settlements is how quickly they fade from the news and how little outrage they generate. That the nation's biggest mortgage lender exploited tens of thousands of the poorest homeowners in America, and got caught by the Justice Department, is nothing more than a one day news story. And not even a big story at that. As far as I can see, no prominent political leaders or advocacy groups made public statements about the settlement -- or complained about the leniency shown to the bank.

Even when settlements against rogue companies are much larger, the story quickly disappears from sight. For instance, answer this question: Which major pharmaceutical company was fined $3 billion by the Justice Department for illegal activities a mere one month ago?

Stumped? Of course you are, because the massive fine against GlaxoSmithKline for "promoting its best-selling antidepressants for unapproved uses and failing to report safety data about a top diabetes drug," along with the "improper marketing of a half-dozen other drugs," was a one-day news story.

In fact, if you want confirmation of my argument that lax punishment of corporations leads to repeat offenses, look no further than the pharmaceutical industry, where many top drugmakers have been fined multiples times by the federal government -- and keep breaking the law.