In the wake of higher  voter turnout in Ferguson, the city council now has three Black council members, up from only one before the election. This is a welcome change. As Demos has noted, the Ferguson city council is one of the many across the country in which Blacks are severely underrepresented. Using data from the International City/County Manager’s Association (ICMA) survey, Demos finds that one in five Blacks are underrepresented in their city council. 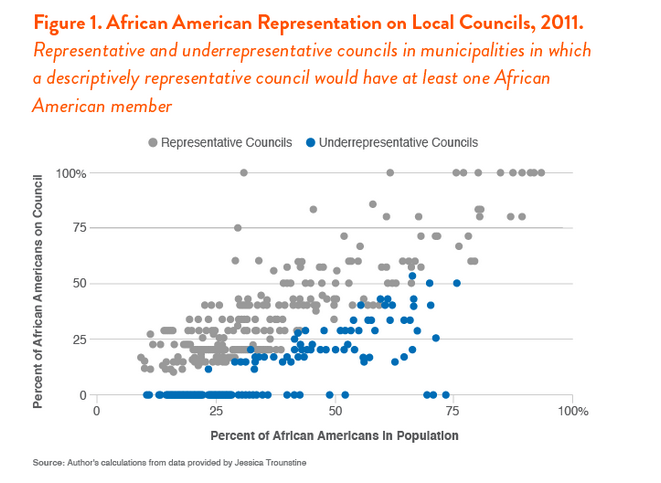 This is important, because racial equity in representation has important implications for policy. Research suggests that Black representatives are more attuned to the concerns of Black voters, and thus represent their interests. African-Americans express more positive feelings about representation when their representative shares the same race. Using exit polls from between 1982 and 2002, Zoltan Hajnal shows that Black voters are those who most frequently vote for a losing candidate: 41% of Blacks saw their choice of president, senator and mayor all lose their election, compared to only 9 percent of whites. This means that Blacks have less voting power: candidates are less likely to try to appeal to their interests. 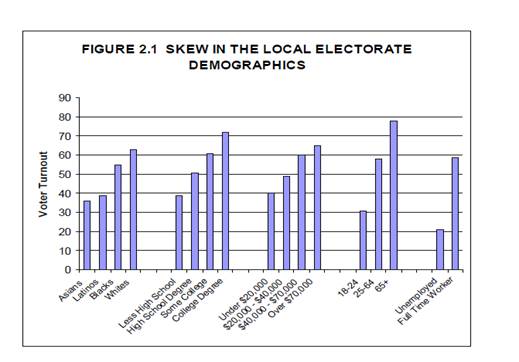 The result of this low voting power is that politicians simply don’t focus on the issues of importance to Black voters. In Minority Report, John Griffin and Brian Newman show that one solution is getting more people of color into office. They find that African-American members of Congress equally reflect the preferences of their Black and white constituents. Further, in some cases, descriptive representation has an impact on Black and Latino’s relative representation, “over and above district racial/ethnic composition, income, turnout, and even MC’s party affiliations.”

Ferguson shows one way to increase descriptive representation: voter turnout. However, while it was higher in the recent election, it was still only an abysmal 30% (still dramatically higher than the previous 12%). The history of Black disenfranchisement, combined with the fact that many local elections are off cycle mean that participation in these elections is abysmal. As the chart above shows, the turnout in local elections is heavily skewed toward whites and the wealthy.

But turnout matters. Zoltan Hajnal and Jessica Trounstine find, “Even after controlling for public preferences, spending capacity, and needs, the more people who turn out to vote, the more local governments are likely to spend their money on welfare, public housing, and other redistributive programs.” Griffin and Newman find that boosting turnout of African-Americans and Latinos increases representation, but that Latinos gain more than Blacks. They find that these advantages are not enough alone to bring about representational equity, but they are an important first step.

In addition, there is a problem on the supply side. In the election before this one, there was one Black candidate on the ballot (he won). In this election, there were four (two won).